I love finding pockets of Germany in unexpected corners of the United States. A year ago I visited New Orleans for the Jazz fest, and stumbled across a booth run by women in Dirndl! What a surprise to learn that Germans had a HUGE impact on development of the city, and that Germans STILL have strong a presence in New Orleans today. Along the St John Bayou near City Park, you will find the center of German life… Deutsches Haus New Orleans. Their new building is home to over 1000 members that make up a number of clubs and singing groups, 2 Bars (that also serve food), language classes, culture evenings, movie nights as well as  a few more lively celebrations over the year like their Volksfest and Oktoberfest.

While visiting New Orleans recently, I had the opportunity to spend an evening at Deutsches Haus. Their slogan is “the German Presence in the Gulf South“, but I think it could just as easily be German Gemütlichkeit meets Southern Hospitality. We wandered in the back door (as family does) and headed straight for the main bar where they have 20 beers on tap… mostly German… as well as wines, soft drinks and a selection of Schnapps. While there isn’t a formal restaurant, the bar does serve food. We ordered Bratwurst (which came on a Pretzel Bun), Flammkuchen, and a Pretzel. Also available was Goulash over Spätzle. You won’t walk away hungry!

The current building was opened in the Fall of 2018, but the Deutsches Haus has been a part of New Orleans for 90 years when it was formed by combining the Deutsche Gesellschaft with a number of other German clubs.

Our delicious dinner, not pictured is the Goulasch and Spätzle

I was really curious about German history in New Orleans… especially after my visit to the Auswanderer Museum in Bremerhaven. It turns out that Germans have been in and around New Orleans for almost 300 years! The French started off by inviting any and all people who wanted to colonize Louisiana to come to the New World. Unfortunately, this meant unwanted elements of French society were packed on boats and shipped over. Sadly, they were of no more use in Louisiana than they were in France.  Then in the 1720s, Jean-Pierre Purry, a Swiss businessman suggested that Germans should be recruited since they had “just the qualities needed for settlers in the new colony, being of sturdy stock, honest and hardworking” (sounds like my relatives…). At that time, somewhere between 4000 and 10,000 Germans left their homes and villages. Sadly, most of them died… either en-route, or on arrival from disease like Yellow Fever. But those who survived started farms and businesses, and their numbers began to grow.

In the Revolutionary year of 1848, thousands of Germans were leaving their war-torn homeland and headed for New Orleans. Ships from America headed to Bremen/Bremerhaven loaded with cotton, and sailed back to Louisiana with their hold fulls of emigrants. Many of the new Germans were being taken advantage of, and the earlier German immigrants felt that something needed to be done. They formed a group called “The Deutsche Gesellschaft“, raised money, and took over the task of shepherding the new arrivals into decent jobs and places to live. A few acted as interpreters through customs, took care of medical needs (insuring that German speakers got German Doctors) and found German homes for the many orphaned children (Yellow Fever really was a problem). The group also kept detailed records of all immigrants. By 1852, 25,000 Germans a year were landing in New Orleans, and the Deutsche Gesellschaft was there to make sure they were all taken care of and protected from scammers. The late 1850s was the peak of German immigration, when 40,000 came in one year. Some stayed near New Orleans, others headed up the Mississippi to St. Louis or Cincinnati. 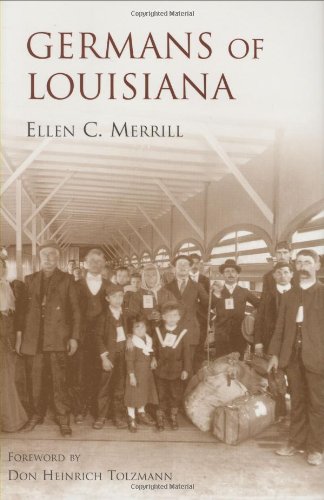 Through the late 1800’s to the early 1900’s Germans were a strong influence in New Orleans. They had farms that produced much of the food consumed in the city, they opened Churches and Schools. There were German Language newspapers, and German breweries (anyone remember Jax beer?). You can still see evidence in some of the street names, and in the inscriptions on tombstones. Sadly, World War I made being German unpopular, and the group kept a low profile. Then in 1928, the group joined a few Sängergruppen and a Turner Group, to become the Deutsches Haus.

For more information, read the history in Germans in Louisiana (and it really is quite interesting!). The book not only details the history of Germans in the area, but also has lists of businesses, schools, churches and organizations that were established by Germans.

Today, the Deutsches Haus still operates as a non-profit to promote German culture in the South. I was excited to be there on a Culture Evening, when a local professor from Tulane University gave a talk about the German inscriptions at the Lafayette Cemetery. (Ok, the history nut in me was excited to hear about tomb inscriptions… but so were 30 other people…. and there was beer).

The Deutsches Haus Great Room… For talks, meetings and gatherings

And it’s not just lectures!

As one gentleman joked… “put three Germans in a room, and you end up with five clubs.” One look at their Events Calendar, and you will see they are a hub of German activities. There are Singing Groups for men and women, a Ladies Auxiliary group, a men’s Schlaraffia group, music evenings, a Home Brew group, Trivia nights, Wine Tastings, German Movie nights, language classes (for adults, children, and those who just want to learn Tourist German). Naturally there is a Bier Garten (with beautiful Oak Trees). They even broadcast Bundesliga and Champions league soccer matches!

What makes the Deutsches Haus Special

The original Deutsches Haus was built by German craftsmen... but when Hurricane Katrina swept through the city, much of it was ruined. In typical German style, as much as possible was saved. Parts of the floor became the front of the main room bar, the lanes from the original bowling alley became the member’s bar, some carvings were taken and placed about the new bar, and the  and there is a rumor that people were even recycling nails (we don’t waste, do we?).

But more than the building, it’s the people and the history that make the Deutsches Haus a wonderful place to visit. People at Deutsches Haus are welcoming, and happy to share their stories. Whether their families had come from Germany 150 years ago… or they had arrived 30 years ago… members are proud of their heritage.

Next time you are in New Orleans, drop by the Deutsches Haus at 1700 Moss Street. You will find family there that you never knew you had.

0
1   0
previous German Easter Breakfast- The BEST German Breakfast of the Year!
next Tips for Germans on Buying and Renting Property in America