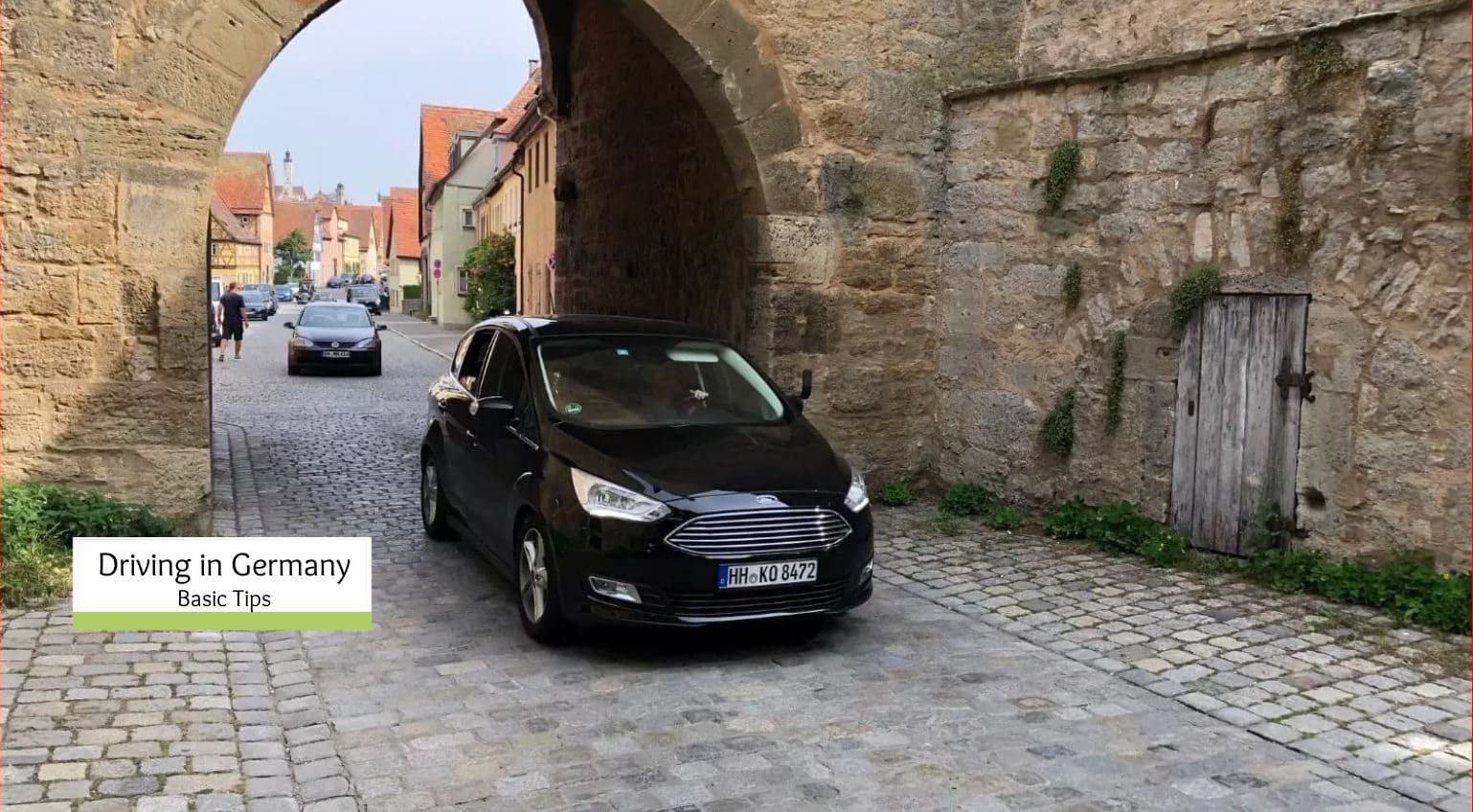 Some Basic Tips for Driving in Germany 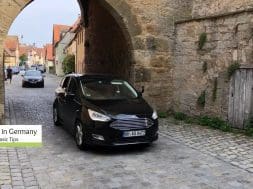 Some Basic Tips for Driving in Germany

Often when I travel to Germany, I’m visiting family, so I don’t really need a car…. or I’m traveling on business, and manage to take the train. This time, my itinerary was a bit more elaborate, so I needed to rent a car. I’ve done it in the past, so driving in Germany didn’t seem that intimidating. Still, there are some things you should be aware of to safely drive in Germany. Because driving in Germany is NOT just like driving in the USA, and I’m not just talking about the Autobahn.

We rented a car from Auto Europe. I can’t recommend this company enough! Their website was fairly easy to navigate, plus the prices were great for the amount of time, and the route we wanted to take. Because I needed two different “one way” rentals, I called after checking out the site, and the person on the phone made sure I had everything set up the right way. (He even managed to figure out a cheaper route) And when I got there… we were given a free upgrade!

Before I go any further.

Your American Driver’s license is valid in Germany for up to a year for visitors, after this period you can get an international driver’s license for Germany.

Some basic tips for Driving in Germany

1. A stick shift will be cheaper to rent, and a lot more common at the rental places, than an automatic. I thought…”Heck, I drove a stick shift for YEARS! How tricky could it be”. Well…. since I HADN’T driven one for 10 years, there was a learning curve. I’m happy to report that after stalling out 3 times on the ramp out of the parking garage, we managed to safely drive through the streets of Hamburg to the hotel. (And I’m sure that man will recover from his panic attack soon).

And for the record, I can now reverse…. (For a while I thought I’d have to put it in neutral and let my daughter push us backwards. She was not amused when I suggested it).

If you are at ALL unsure, go with Automatic. The extra money you spend could add years to a parking lot attendant’s life.

2. There are a LOT of lines on the road. Don’t cross the solid ones.

3. About those lines... some are white, and some have yellow NEAR the white, especially in construction zones. Yellow is more important than white… and DON’T cross the solid ones.

4. No, the entire Autobahn isn’t a “speed limit free” zone. The round circles with numbers in them are the speed limit. They seem to randomly go up and down. Mostly in construction zones (and there are LOTS of construction zones) but also near cities, and seemingly randomly… And OBEY the Speed Limit! You may not see policemen, but those blue pillars are equipped with radar and cameras. And it will catch up to you. 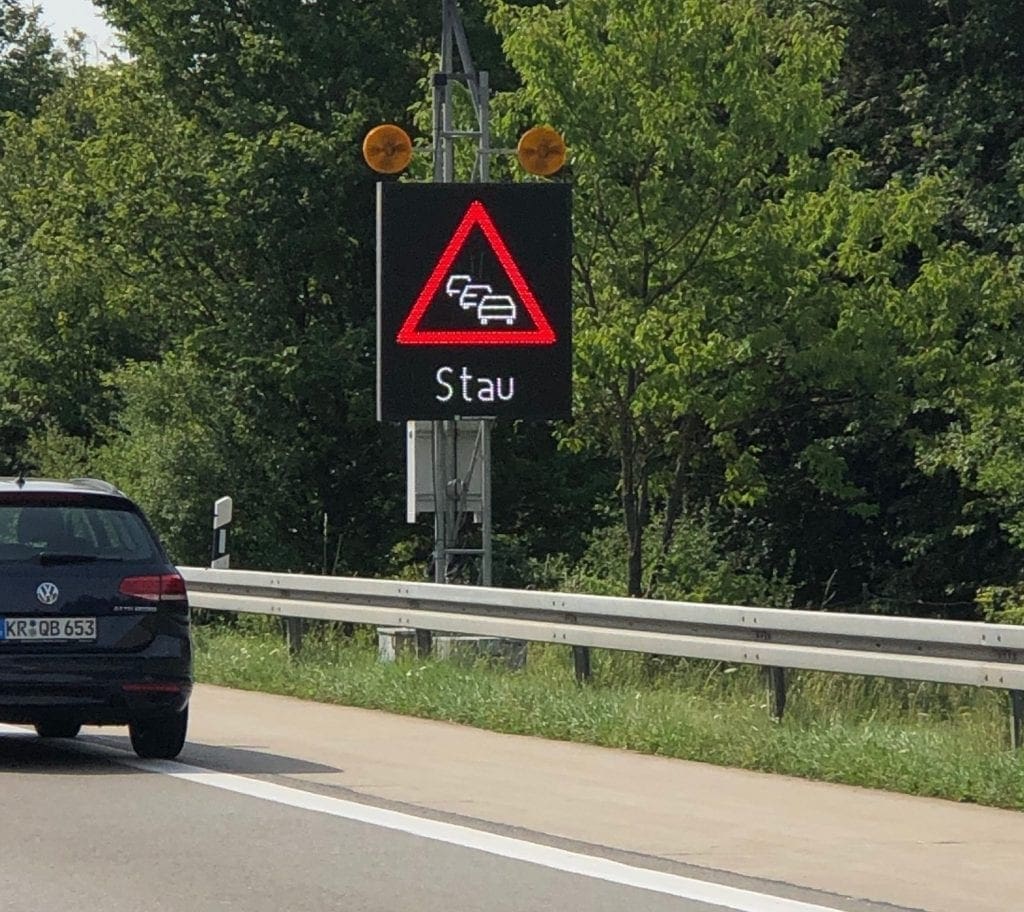 6. Cars in Germany are smaller than in America. But that’s ok because roads are narrower, and parking garages are downright tight. I’m sure that somewhere on Youtube is a video of me making a 27 point turn to get my car into the world’s tightest space.

7. A navigation system in the car is a lifesaver. You can set some to speak English (I think). Ours is German. She seems nice, enough, but sometimes the directions come at the last second (we just go around the block and try again). It’s good to have someone riding shotgun to keep track of directions. Mostly because if you miss an Autobahn exit (the famous AUSFAHRT) (giggle) you might have to travel MILES (well, Kilometers) before you can get turned around.

8a. Even if you have a “Navi”, carry a map. We were surprised to find out that sometimes the navigation system couldn’t connect to satellites. Luckily, we had a map along so we could figure out what exit to take.

8. Turning Right on red is totally illegal. (This isn’t California!!)

9. Speaking of red… The traffic lights are NOT on the other side of the intersection. If you go too far into the crosswalk, you won’t see them. AND pedestrians will give you a nasty stink eye.

10. More about those traffic lights… they take FOREVER. It’s not unusual for people to shut off their car while waiting for the light to change.

11. Don’t worry about missing the light change… When it’s about to go from red to green, the light will flash yellow (and you will hear a dozen cars start up at once).

12. When you drive, stay to the right. If you want to go faster than someone else, pass on the left. Don’t even THINK about passing on the right.

13. If you are trucking along on the left, and a car zooms up behind you and flashes lights, move to the right. This is no time to get into some macho contest about who is faster. You can go back after he’s gone.

14. If there is an accident, a gap will be created between the lanes of cars for emergency vehicles. (Not on the far right or left as we are used to.) Just follow the person in front of you… and watch the overhead signs for picture directions.

15. Should you have an accident, or a break down, get to the side if possible. Then put on your safety vest. It’s bright yellow, most likely tucked into the back of the car, and they are a requirement for any person walking around on the Autobahn… even if you are well off it and in a safe place. (No one will fault you for your fashion sense… in Germany it’s “safety first”)

16. Buying Gas is different from California. You gas up FIRST, then you go in and pay the attendant. It’s quite a trusting system… And remember, gas is sold in Liters, not gallons. (And be sure to double check what KIND of gas you put in, so you don’t accidentally grab diesel when you need regular).

17. Don’t expect all hotels (especially those in the Altstadt) to have a parking lot or garage. We have had to park a few blocks away more than once. (And let me tell you, pulling bags over cobblestones is a special adventure).

18. Parking Garages are TIGHT. Honestly, here isn’t a ton of room, and the ramps are crazy narrow. But, since you were smart enough to rent a smaller car, you should be fine.

Finally, relax. There are differences, but in no time at all you will feel comfortable behind the wheel in Germany. Before you know it, YOU will be the one zooming up behind the noobies and flashing your lights to get them out of the way. ZOOOM!

For more information about driving in Germany, get this Free E-Book: “RENTING A CAR IN EUROPE”

tags: driving in germany how to drive in germany
0

0
1   0
previous Nightwatchman Tour In Rothenburg ob der Tauber
next My Month in Germany- And I STILL haven't Seen it All! 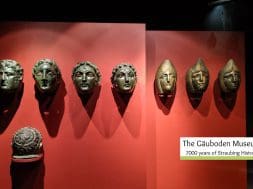