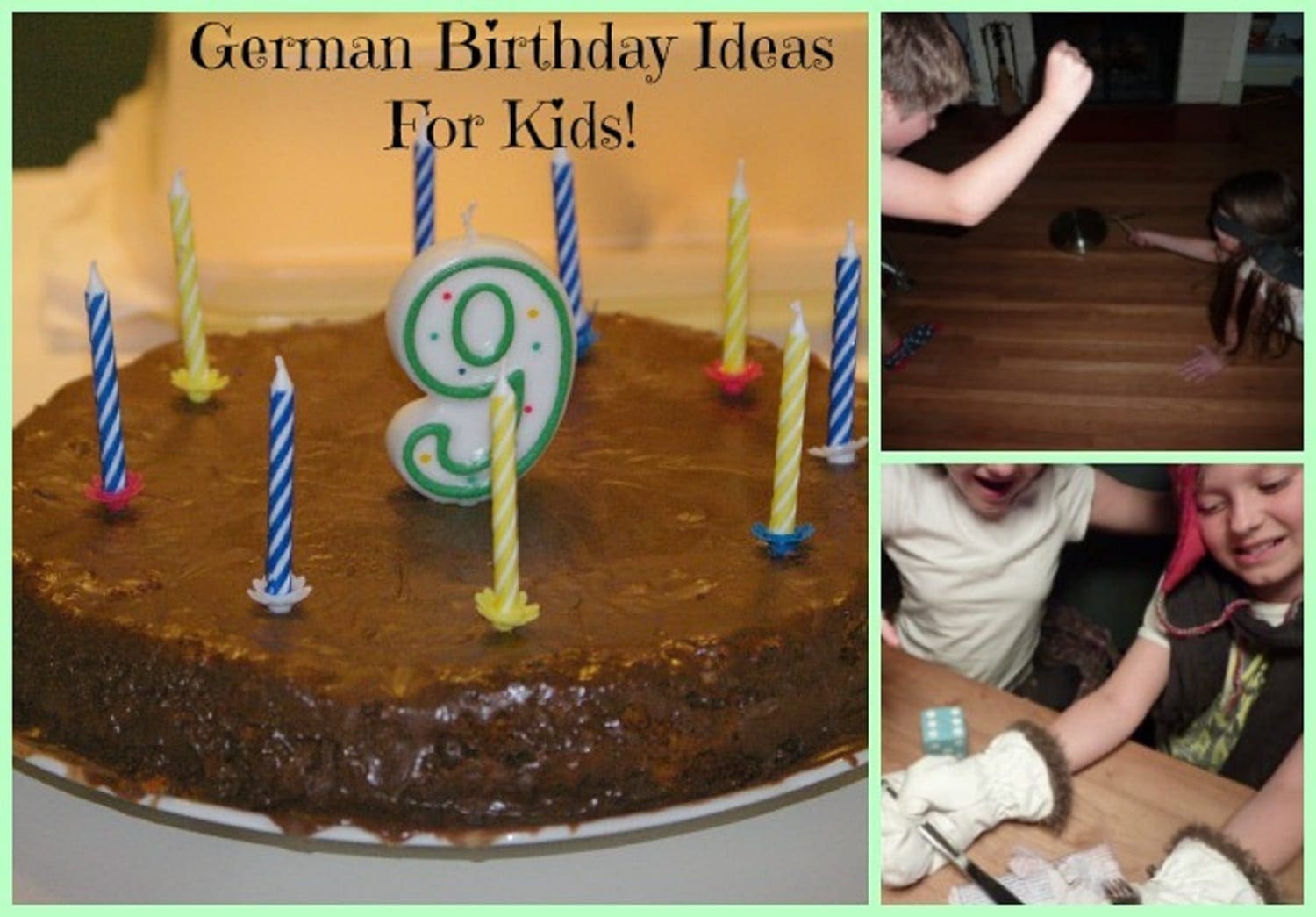 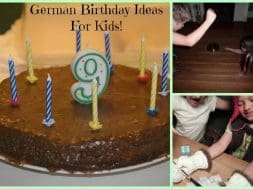 Drew Bulkeley, is an American comedian and blogger who spent 18 years living in Germany. His blog, Berlinerish.com “How I learned to stop worrying and love the Germans” is a fun look at ex-pat life. Recently, he’s returned to the US, where he landed in Portland along with his wife and daughter. The culture shock is real for all of them.  This week, he sent me this fun post about his daughter’s first birthday in America… she wanted a German party! The games and German Birthday Ideas for kids that his wife came up with remind me a lot of what my mother did for us on our birthday. Take a look….

Today is my daughter’s first birthday outside of Germany. She’s not happy. During the run-up it seemed like she might not even celebrate. We were worried she was going to hold a lonely wake instead.

But then my wife had an idea. Partly because, as I’ve discussed before, she’s a Jedi. But also because she’s a mother and making children happy is a special talent of moms. Like making sandwiches. Dads on the other hand – I’m not sure we really have any parental talents. Except maybe being the parent without parental talents.

“Why don’t you have a German-themed birthday?” my wife suggested to my daughter. It worked better than any Jedi Mind Trick ever. Though have Jedi Mind Tricks even been invented yet? (Note to self: E-mail George Lucas about first Jedi Mind Trick).

Beyond sausages, pretzels and Wagner, this is what her party will look like:

The point of this game is to find your prize. When it’s your turn, the prize already legally belongs to you but your friends want you to earn it. So they blindfold you and then hide your prize underneath an overturned pot. Seems mean – it’s your prize – but Germans define “mean” differently. They tuck the pot and prize off in a corner of either the yard or the living room, depending on the weather and the current mental state of the host parents. Next, you are given a wooden spoon. Your task is to get on all fours and divine the location of your prize by whacking the spoon against objects to find the pot.

Your friends help by bellowing „kalt!“ (cold!) or „warm!“ (warm, dummy) depending on your current trajectory and the location of the prize. Many wooden spoons, vases and parental shins have suffered during this game. But as of yet, everyone got their prize.

I know, sounds like a Hunger Games the Oompa Loompas hold for kids who lose their way in the Chocolate Factory. But it’s not. First, a chocolate bar (preferably Milka) is wrapped up in newspaper and then kids crowd around a table. They take turns rolling a dice until someone gets a six. The sixer then has to put on adult winter gloves, a scarf and a winter hat and attempt to unwrap the chocolate with a knife and fork. Once unwrapped, the sixer can eat all the chocolate they can.

All the while the other kids continue to roll the dice. Should anyone hit a six, they then have to take the winter clothes and cutlery off the previous sixer and either continue unwrapping or eating the chocolate until the next six falls.

You’re right. Maybe the Oompa Loompas did invent it. Yes I know the band Veruca Salt got its name from the film.

Up until I found out about this game I thought Germany was the most environmentally conscious country on the planet. I now realize they only do it to make up for playing this game.

Two teams of two face off in this game that requires one team member to wrap the other up in toilet paper. The winner is the team that entirely covers its mummy first. Not even a thought of the player can show through. The winning team gets a prize and the toilet paper gets discarded.

Though, to be honest, we may not allow this game this year because of the environmental concerns. And because toilet paper costs twice as much in America (really!). We may substitute it with Sackhupfen (Sack Race) or Der Plumpsack geht rum (Pass the Falling Bag), which sounds horrible in both languages but is just a modified version of Duck, Duck, Goose.

At the end of a German birthday each kid leaves with a gift bag full of treats and the parents get to begin another tradition of German kids’ birthday parties: Heavy drinking. It’s also a tradition we’ll be following here.

You can find more interesting posts from Drew Bulkeley on Berlinerisch.com/. Check him out today! or follow him on Facebook Drew Portnoy- How I learned to Stop Worrying and Love the Germans

0
0   0
previous What is a Lumpenball? The End of the Karneval Party!
next Why Omas are the Best! 35 Reasons Omas Totally ROCK!