What is Schuhplattler -All About this Bavarian Cultural Tradition 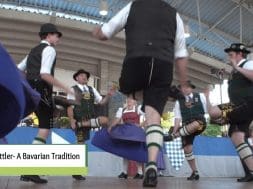 What is Schuhplattler -All About this Bavarian Cultural Tradition

Slap the Shoes and then Smack the knees with Flat Hands… Men jumping around, stomping their feet, and slapping their knees and shoes, sometimes alone, sometimes with in a circle with ladies who twirl as if ignoring them. From the outside, the Schuhplattler looks like a version of crazy dance moves you might see on a street corner. But the dance itself is carefully choreographed, and comes with a rich history that dates back 1000 years. And some say claim a version of the dance goes back to 3000 BC! Today, the Schuhplattler is at the core of many German-American societies, and what keeps many German-American descendants connected to Germany.

So WHAT IS Schuhplattler? Where did it come from? And how is this Bavarian Tradition being kept alive in America today.

(A HUGE thank you to my friend Christina, a member of the Toledo Holzhacker Buam Schuhplatter Gruppe, who shared some of her photos, and guided me though the writing. I owe you big!) 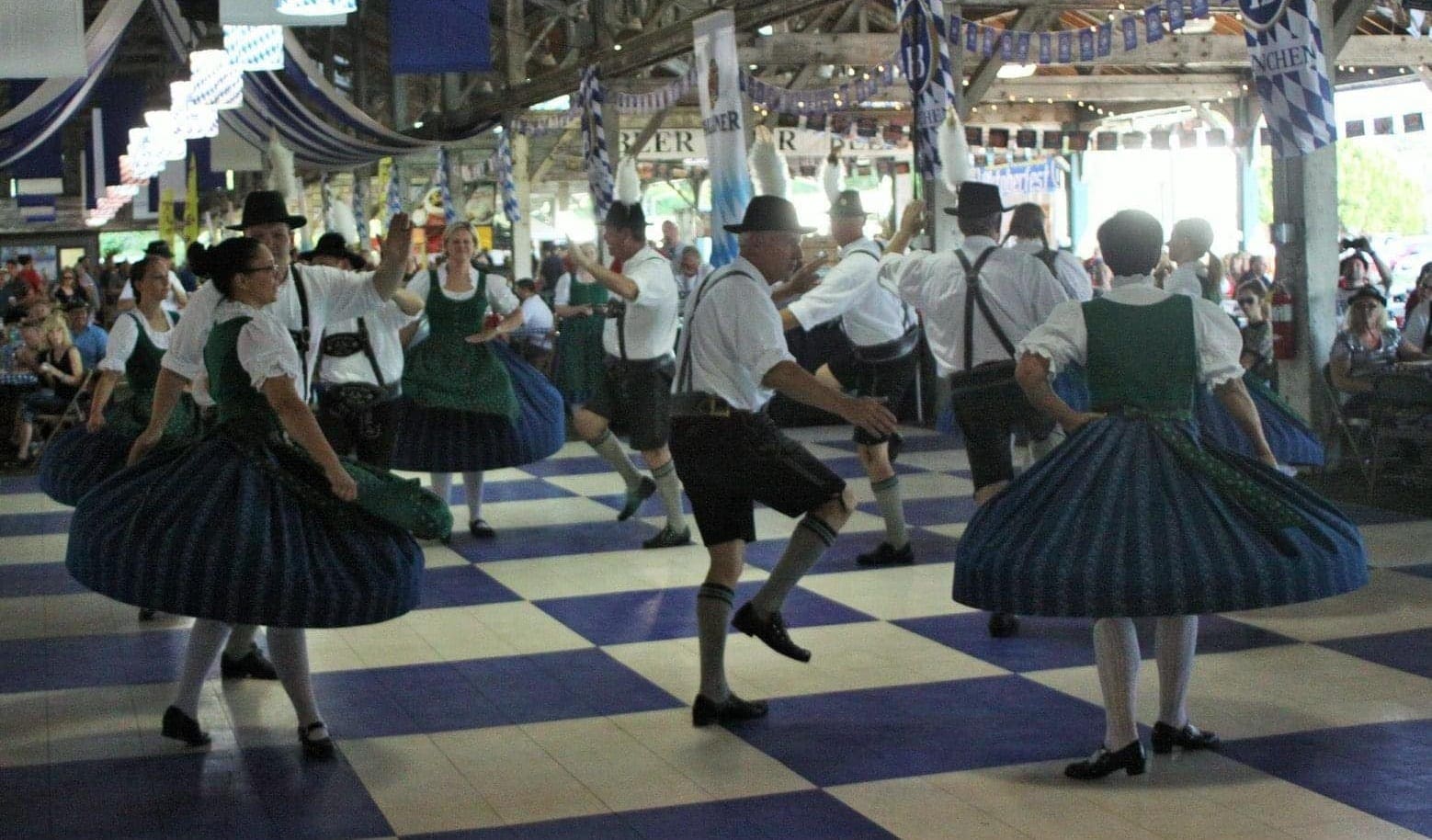 Like so many other fun things in life, the Schuhplattler began as a courtship ritual. Men making giant leaps, intricate slap sequences, and cool dance moves were basically out to get the girl. (Because logically, women know that the guy with the smoothest moves and highest jumps will make the best husband. It works in the wild after all…). Poet Karl Stieler even wrote a poem comparing the Schuhplattler to the courtship dance of the Auerhahn or wild Grouse. (I’ve seen this courtship dance on a nature program… the Schuhplattler boys are smoother.)

Simple versions of this courtship dance were thought to be around as early as 3000BC. (Remember kids, there was no Tinder) Then around 1050 AD, an unknown Monk at the Tegernesee Monastery wrote one of the earliest German Romance poems called “Ruodlieb“. In it, he describes a dance with leaps and hand gestures performed in a local village, the earliest WRITTEN mention of the Schuhplattler.

As a side note, this poem is special, not just because it’s the first written German Romance poem, but because it speaks of a meeting between Henry II, the Holy Roman Emperor and Robert II of France. (The story itself is about a knight, a king, loaves of bread, proverbs, a dwarf, a treasure, and naturally, a bride). Finding the poem was a small miracle, since it was never finished, and the fragments of it were used to bind other books. Not until 1807 did a clever puzzler put it all together. The dance may have begun as a way of standing out for attention, but in time, dances were standardized, and different Bavarian and Tyrolean towns had different dances. In all, there are around 150 different Schuhplattler! With names like Mühlradl (Miller’s Dance), Holzhacker (Wood Cutter), Wendlstoana, and even Auerhahn.

How does a Schuhplatter Work?

While the Schuhplatter may have started as a boys only club, in time, women joined the dance. Couples dance in a circle, women on the outside, men in the middle. The men in Lederhosen (Bundhosen or Knee Pants don’t allow for good flexibility) do slap part in unison, while women in Dirndls spin around, then they come together. The women twirl to “bell” their skirts (and maybe show a little ankle and leg…).

Music for the Couples Schuhplatter is in 3/4 time, like a Waltz (think about dance class….One Two Three, One Two Three). The connection makes sense… before the Waltz, there was the Ländler (who remembers Julie Andrews and Christopher Plummer dancing the Ländler in the Sound of Music?). The Ländler started as a couples dance with a lot of stomping. As dance halls became fashionable, no one wanted a bunch of young men stomping their boots on their beautiful floors. The Ländler dance evolved into the smoother waltz, and the Schuhplatter guys took their moves elsewhere.

At first, boys and men would move as they liked, within the melody of the Ländler, while girls/women twirled around them. This is no easy trick! Women spin and move at the same time…stepping either every other beat, or every beat depending on the dance. All the while, the skirt must stay belled out. (Points are deducted if they fall in competition) Then, they join back together smoothly. In time, the men’s moves became standardized, and while there might be some “free plattling”, it isn’t generally done in a couple’s dance. 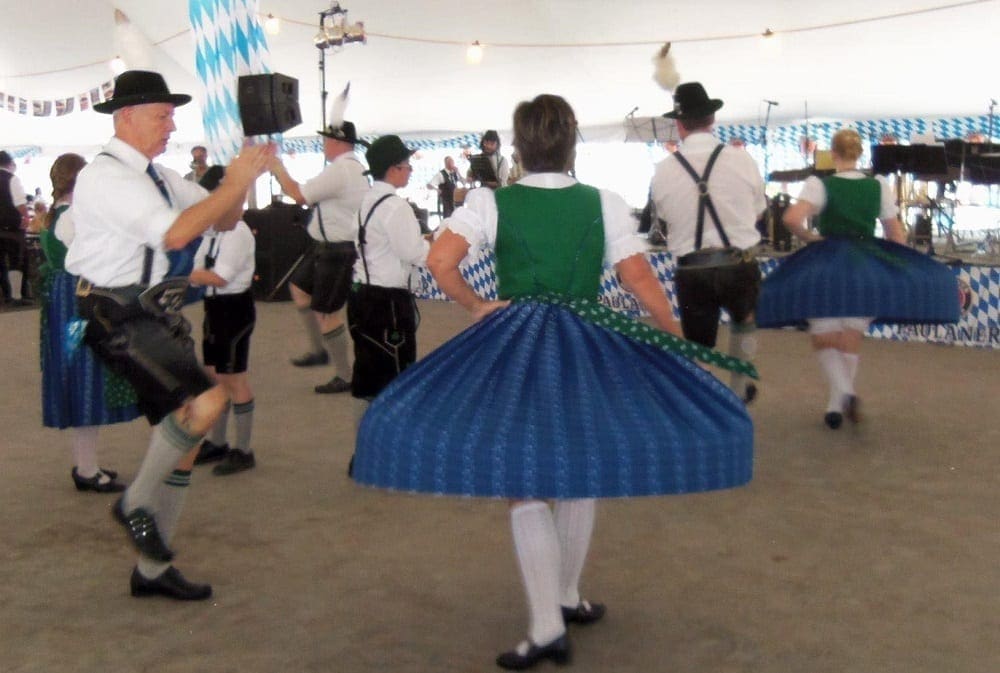 Men also danced Tradesmen Plattlers, which might show off the tools of the trade. Props like workbenches, saws, axes, and even cowbells are brought to the floor. Music for the Tradesmen Platters are 2/4 time (think Polka beat).

Schuhplatter Becomes a Symbol of Pride

Maximillian II (son of Ludwig I of Oktoberfest fame, and father of Ludwig II the Fairy Tale Castle king) spent his time on the throne doing what he could to preserve Bavarian independence and create a center for art and culture. In 1858, he wanted to get up close to the people of his kingdom, so he decided to take a walk around Bavaria (because of his age, and serious rain, he did make part of the journey by train). When he reached the Alps, local Villages danced a Schuhplattler for him. He was entranced! And the Schuhplattler officially settled in as an important part of Bavarian cultural heritage.

By 1861 the first society for Schuhplattler was formed (those Germans and their clubs!)

What solidified the Schuhplattler were the Tracht Vereine, organizations dedicated to the preservation of Regional Clothing or Costume (not like a Halloween Costume, think Folk Outfit) and customs. Teacher Josef Vogel spent years working for the preservation of the old costumes and local customs, and in 1883, he established the Club for Preservation of Folk Costume in Leizach Valley in Bayrischzell. Many other groups in other towns and cities soon popped up to preserve THIER Tracht, their traditions, and even THEIR choreography of the Schuhplattler.

The Schuhplattler Crosses the Ocean

The second half of the nineteenth century was the time was the high point of German Emigration. Germans arrived in America with a strong work ethic, but also some great dance moves. Clubs sprang up wherever Germans settled (as the old joke goes… “when three Germans meet, you come out with 5 clubs”. In 1914,  the Schuhplattler-Verein Edelweiß in Chicago was the first official Schuhplattler Verein. Because the immigrants arrived from different corners of Germany (and from different villages in Bavaria), groups would choose a dance, and sometimes even choose a group Tracht that belonged just to THAT group. Some groups are naturally quite strict about maintaining the old traditions… others are a bit more relaxed. 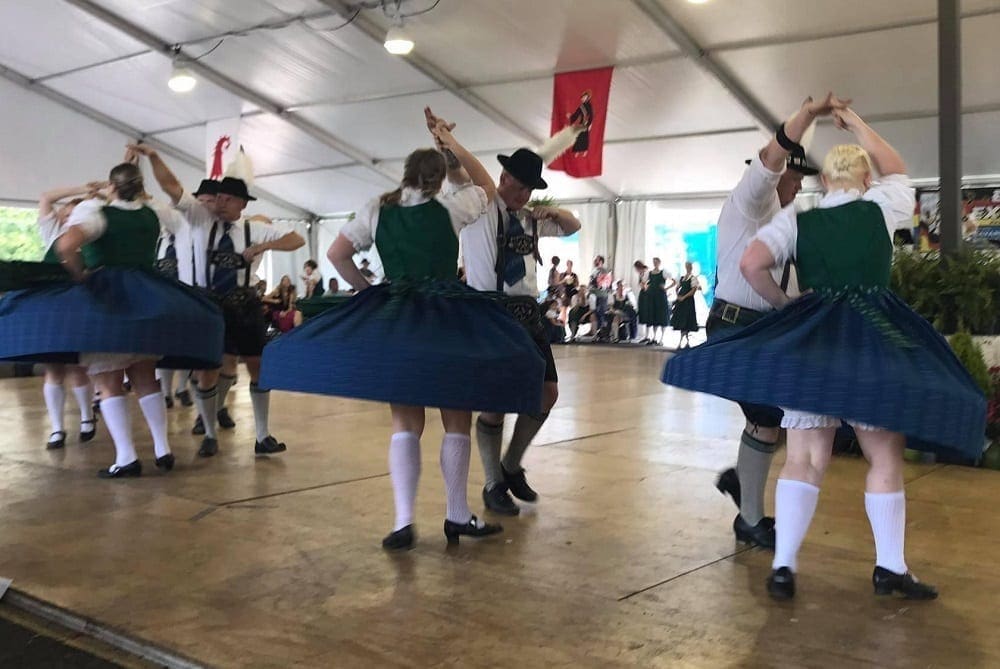 Clubs were springing up all over America. Naturally, these clubs wanted to celebrate together… and compete with another. But different dances and different styles made judging impossible. And as you can imagine, with no one in charge, getting anything organized was a logistical nightmare. Where there is a problem, Germans will figure out a solution, and the Gauverband Nordamerika was established in 1965. Since then, the Gauverband has acted as an umbrella to oversee the Tracht and Schuhplattler Vereine, and set up National gatherings where clubs can show off their dance and Tracht.

They even created the Gauplattler… a Massenplattler (massive dance) where many groups can perform together in one magnificent dance group. And that is quite the event to see!

In 2014, the Schuhplattler went back home. In what must have been an amazing thrill, over 50 couples representing 35 clubs of Gauverband Nordamerika perform the Gauplattler in the Festzelt Tradition on the Oide Wiesn during the 2014 Oktoberfest.

Do I Dance a Schuhplattler?

No, honestly, I love to dance, but I just learned the standards (Waltz, Foxtrot). Still, I recently took part in a panel discussion for for the Tierra Blanca Arts Center & Semblanza, to celebrate German-American Day.  I felt a bit like a fish out of water. You see, Semblenza is an organization that celebrates Dance and the Arts in different cultures. (My part was to be the voice of history? Because I’m old? heehee). I enjoyed listening to my fellow panelists explain WHY they still loved to dance. And speaking to other dancers that I know, they all say the same thing. Dancing the Schuhplatter gives them a connection to Germany, to their history and culture.

What struck me the most was something the hostess said. She praised the women for their ability to turn and move, she complimented the men for their jumps and complicated steps. But then she pointed out something that I missed before. German Dance, German Schuhplattler, is a part of culture that involves ALL Generations. Grandmothers dance, Fathers dance, the children dance. The whole family can and will participate.

And I am proud to come from a place where culture, and maintaining tradition is important to ALL Generations!

0
1   0
previous Smashing a few German Stereotypes
next What is German Marzipan? All about this Sweet Treat