Every Christmas my sister and I would find a Bunter Teller loaded with treats in addition to our gifts. There was never a name tag… we just knew that mine had a bar of Nougat, and hers always had a bar of German Marzipan. Also on the holiday table, Marzipan Kartoffel (Marzipan Potatoes). And m  mother always got a tray of Marzipan Fruits, and NATURALLY, there were cubes of Domino Steine (Little square confections made from layers of Marzipan, Lebkuchen and Jam).  So, what is German Marzipan? Is this confection made from Almonds and Sugar that can be found all over Europe and in the Middle East different in Germany? And where can you find Marzipan treats for your holiday season? 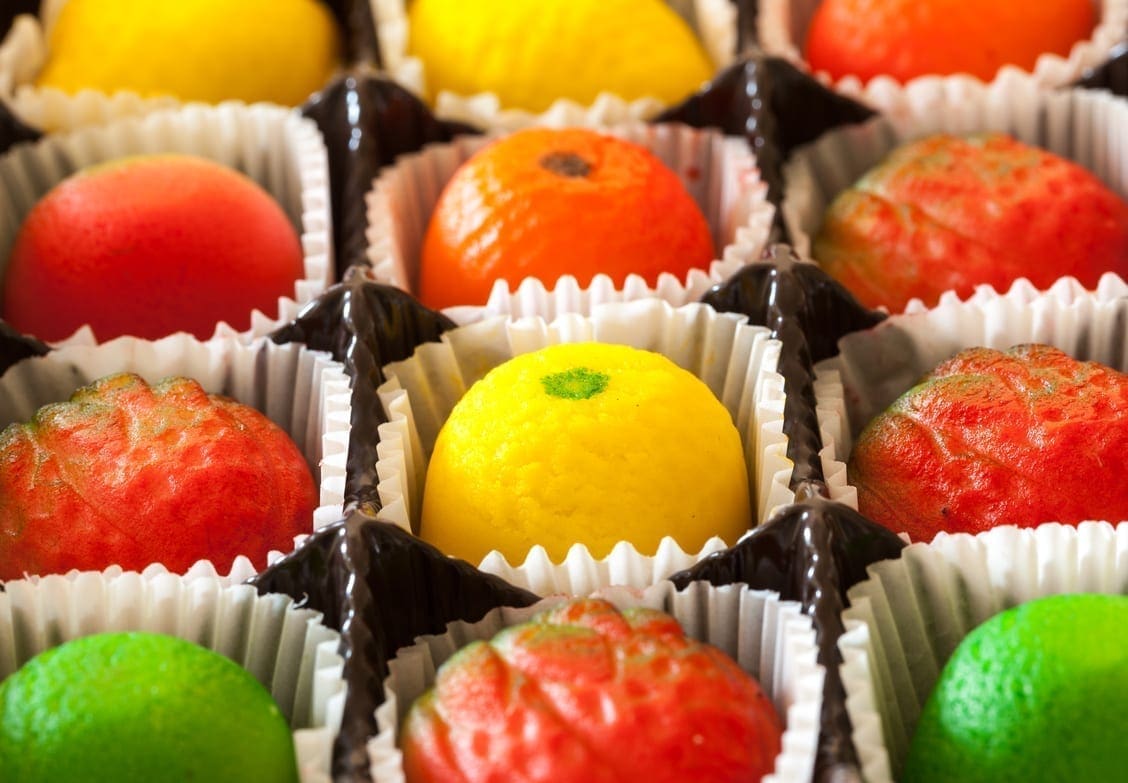 Lübeck is the center of Marzipan production in Germany, so it’s only natural that there is a legendary Marzipan Origin Story. In the 15th century the city of Lübeck was suffering from a flour shortage. The town fathers went to the city bakers and begged for some sort of alternative to save the people from starving. The bakers created the Marzipan Loaf out of eggs, sugar and almonds, and saved the town. Since Venice, Italy has the exact same legend, I am a bit skeptical. (In Italy, it was called Maci Panis or St Mark’s Bread… ) Still, while the Marzipan LOAF is a distinctly German way to sell marzipan, the history goes back a bit further.

Marzipan dates back to the 900s, when a Persian physician named Rhazes wrote of the curative properties of the paste made from almonds and sugar. Slowly it this health food made its way to Europe (most likely tucked into Crusader’s backpacks). It’s thought that the name Marzipan comes from the Arabic word ‘Mautaban’, meaning “King on a Throne”. Which makes sense, because sugar was WILDLY expensive, and only the very wealthy could afford it.

The Hanseatic league ships started importing Sugar and Spices to Germany, which lowered the prices a bit, but these specialty items were still only sold at Apothecaries and dispensed by pharmacists. It wasn’t until the 17th century that the first German  Master Konditors were trained, and the first Coffee Houses opened, that the flavors of sugar and Marzipan became known  in Germany beyond the pharmacy (or Royal Palaces). (Quick aside- the Cafe Prinzess in Regensburg opened in 1686, was the FIRST Konditorei/Coffee House in Germany).

By the 19th century, Sugar Beets made sugar affordable to the masses. When Johann Georg Niederegger opened his Conditorei in 1806 next to the Rathaus in Lübeck, everyone was finally able to satisfy their sweet tooth. Today, Niederegger is still known for their highest quality Marzipan. When you are in Lübeck, make it a point to visit their Cafe, and go upstairs to the free Marzipan Museum. Take a walk through the displays showing off the history of marzipan (and the history of the Almond!).  The 12 LIFE SIZED marzipan statues are worth the visit… AND there are free samples! 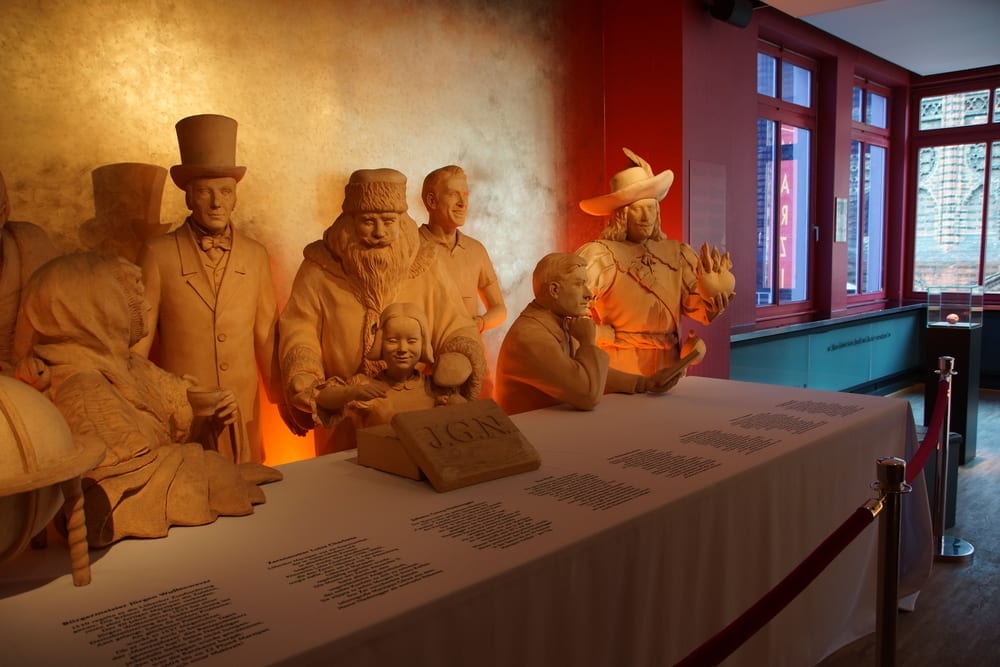 What is German Marzipan

The basic recipe for German Marzipan (Marzipan Rohmasse) is ground almonds and sugar. That’s it.

In some recipes Almond Oil or Almond Extract are added for extra flavor. Egg white may be added to make the mass moldable, and more candy like.  The mass is heated until it’s dry. Don’t think about saving money or cutting corners, legal restrictions are set up preventing the addition of Apricot Kernels. 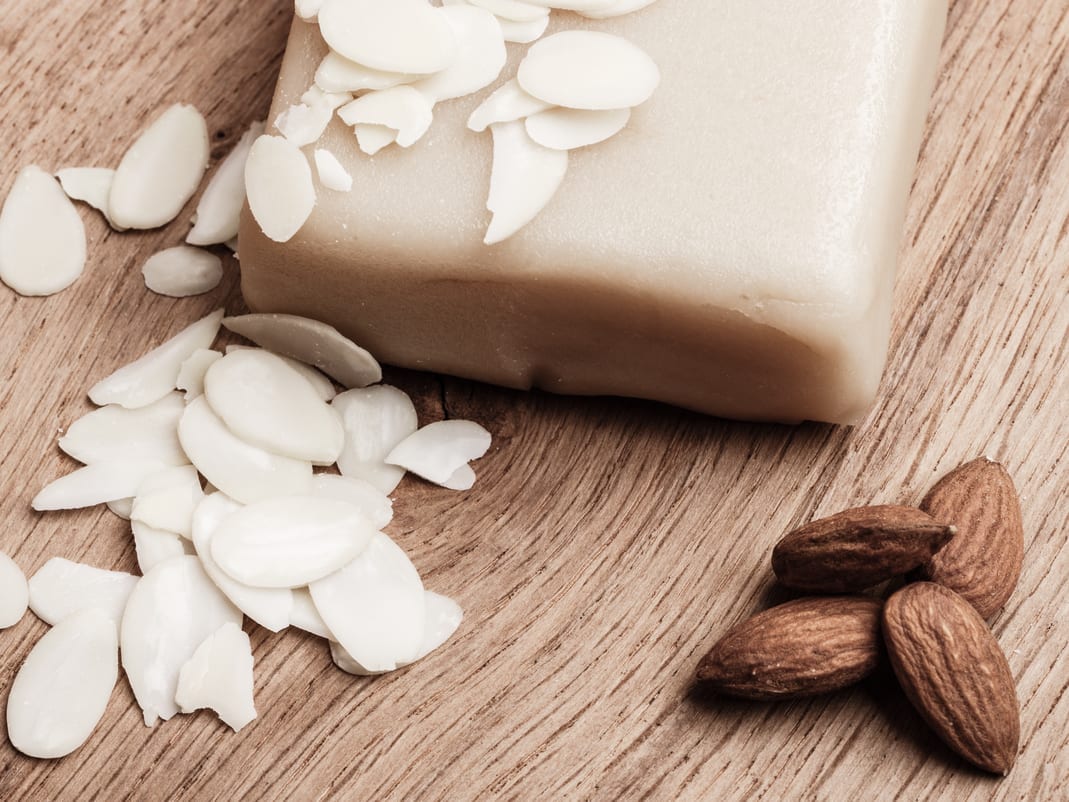 Like Lebkuchen, there are different types of Marzipan, based on the Almond/Sugar ratio.

Marzipanrohmasse (Raw Marzipan)-  Marzipanrohmasse is the base of all Marzipan.
– Consists of – 2/3 Ground Blanched Almonds, and 1/3 Sugar
– label will say 100% Rohmasse, which means no extra sugar is included.

The other types add sugar to the Rohmasse. This doesn’t mean that they change the 2/3 to 1/3 ratio… it means they start with that combination, then ADD sugar to the mix.

Konsummarzipan (everyday marzipan)
-50% Rohmasse plus an additional 50% sugar
-with 85% of the product made from sugar, this is generally sold as candy.

Ever wonder why the marzipan in Echte Salzburger Mozartkugeln is green? It’s made from Pistachios! But because there are so many different sorts of Mozartkugeln, we will save the rest of the story for another post… 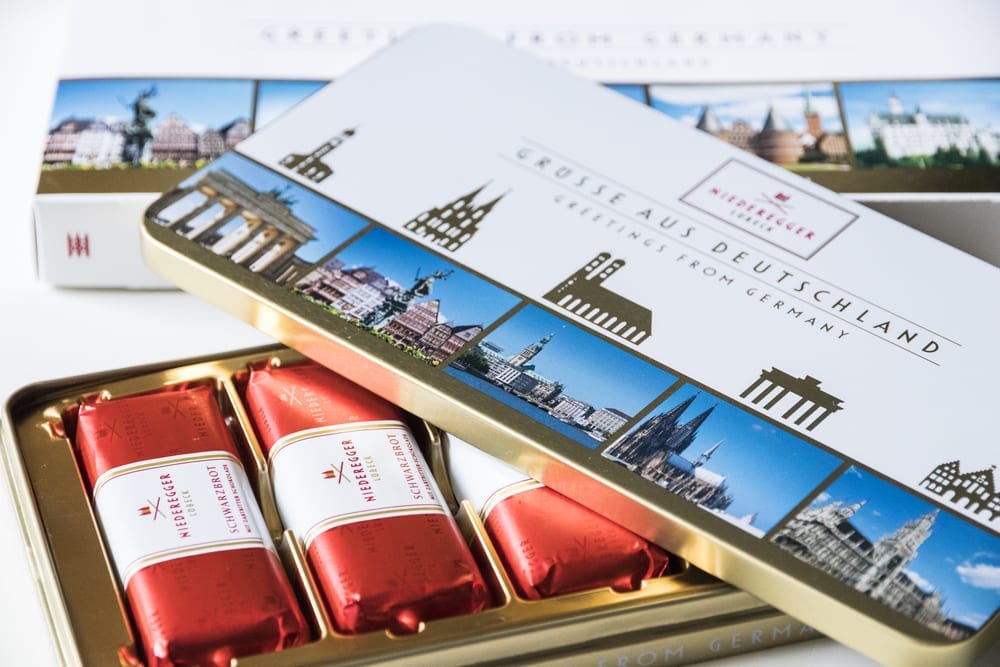 My Opa’s Christmas package often contained Königsberger Marzipan. This specialty Marzipan that comes out of Königsberg in Prussia, and it looked (to my childhood eyes) like cookies. In 1809, the Pomatti brothers established themselves as Konditors, and eventually became the confectioners to the Prussian Crown.  After WW2, when Königsberg was turned over to the Soviet Union, production of this specialty moved to Wiesbaden, and Konditors like Gehlaar and Schwermer kept this type of Marzipan alive.

Like most Marzipan, it’s made from ground almonds and sugar, but in this case, powdered sugar is used. Then Egg White, Rosewater, and a little Lemon Juice are added. The top of Königsberger Marzipan get toasted, so it’s golden brown. Sometimes Marmalade or Jam is added to the center. 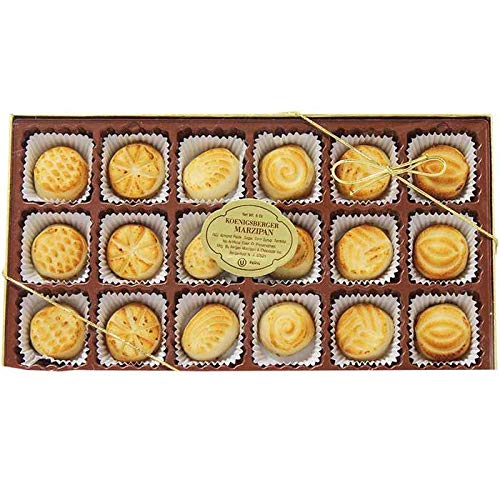 Marzipan for Every Occasion

Marzipan can be soft to use as a filling, or stiffer, to shape into animals or fruits. It can be rolled out into sheets to cover cakes, or coated in chocolate, and eaten as a treat. And serious thought and discussion surrounds the inclusion of Marzipan in the Christmas Stollen! In Germany Marzipan Pigs are given as a gift for luck, and Marzipan Potatoes find their way onto the Advent Table. Its no wonder the Niederegger company produces 33 TONS of the stuff every day!

Here is Where to Find Your Favorite German Marzipan Treats (someone has to eat those 33 Tons!) 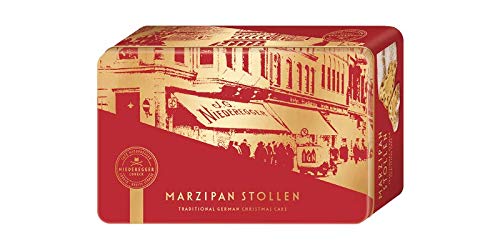 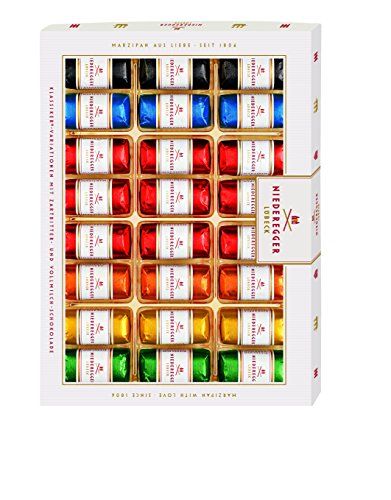 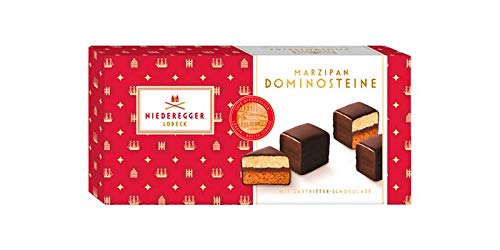 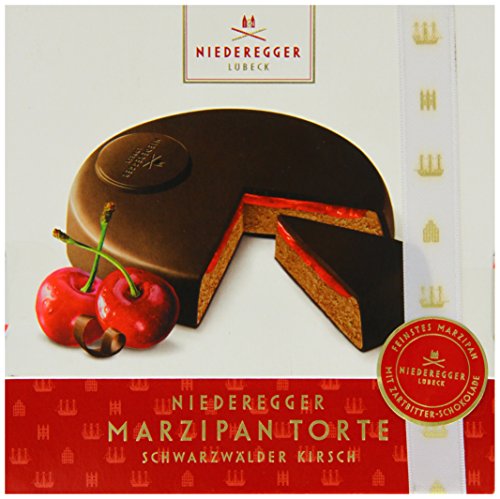 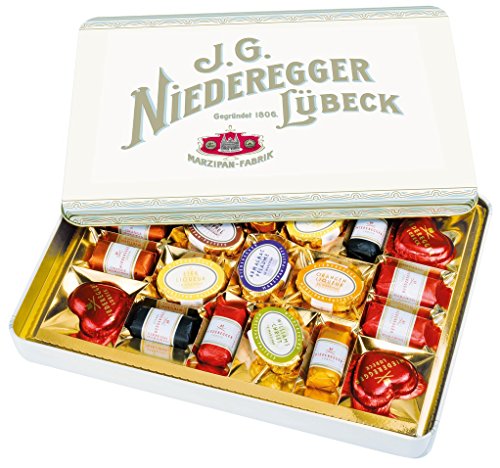 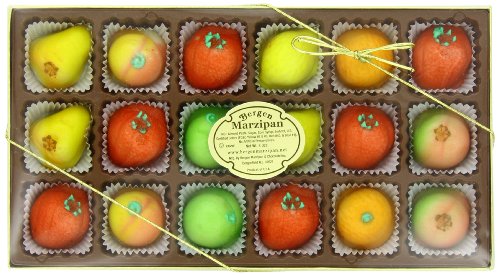 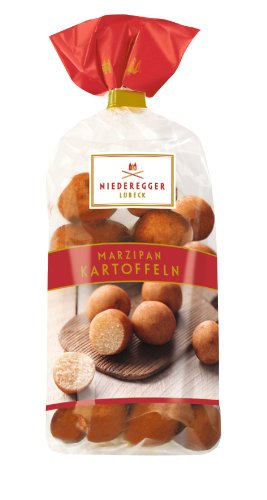 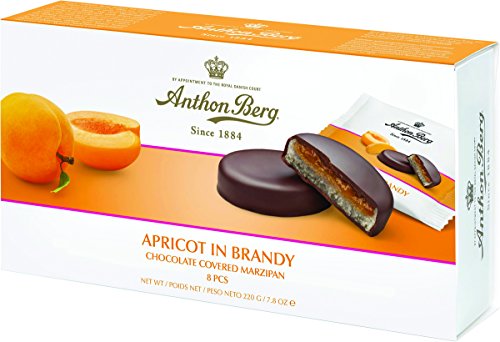 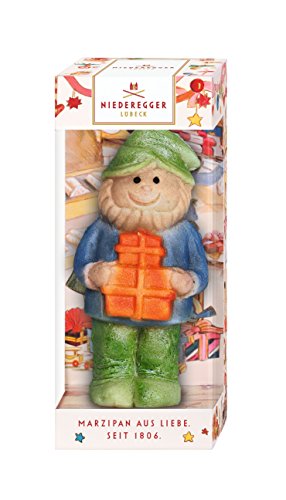 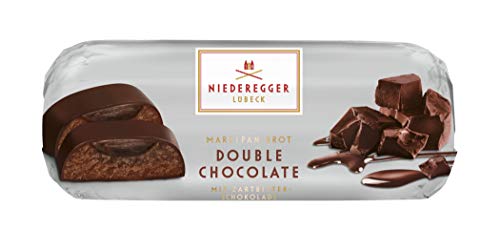 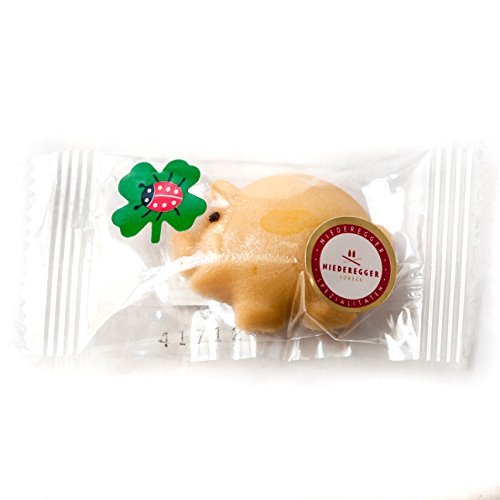 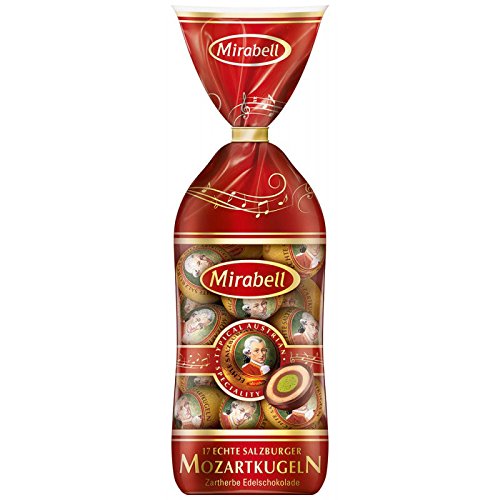 Which German Marzipan is YOUR Favorite?