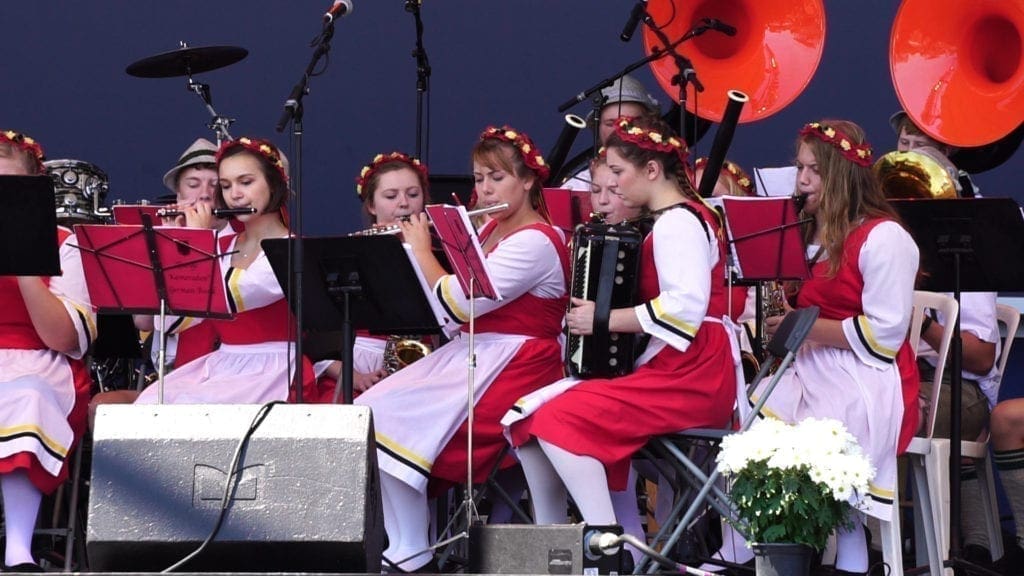 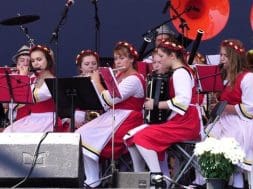 “So ein Tag, so wunderschön wie Heute“… when I heard those words sung, I immediately flashed back to my childhood. My mother playing this on her record player… my Oma’s radio… singing in German school. But the source was unexpected; the singer was a beautiful High School girl, standing in front of the Plymouth Junge Kameraden Band, the first (and I was told, the only) German high school Blaskapelle in the United States. The audience was entranced by the music. Then a man behind me said… it’s so beautiful, I wish I knew what she was saying.

So ein Tag, so wunderschön wie Heute  – such a day, as wonderful as today
So ein Tag, der dürfte nie vergehn    – such a day should never end
So ein Tag, auf den man sich so freute,  – such a day that we enjoyed so much
Und wer weiß, wann wir uns wiedersehn  – and who knows, when we will meet again

It was the perfect song for this very moment. 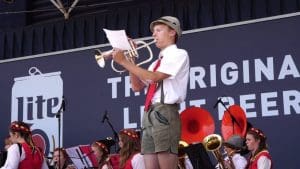 One of the things that struck me the most at Germanfest Milwaukee, was how young people are carrying on German culture. They aren’t just eating Rotkohl, or celebrating Christmas on the 24th, they are keeping the music alive. In a world of unlimited hip hop and rock downloads, the Junge Kameraden are putting on their Dirndls and Lederhosen to perform the folk classics that their grandparents grew up with.

And the best part… they love doing it!

The Plymouth Junge Kameraden has been a fixture at Plymouth High school in Wisconsin for 35 years. In all that time they’ve only had 2 Band directors, Ernest Broeniman and the current director Jason Sebranek. It’s the director’s devotion to the band that seems to keep the kids motivated. Imagine, Plymouth High School only has about 750 students, yet they have multiple bands… including the Junge Kameraden! How do you convince modern American kids to put on German Tracht and play old German songs? It’s a labor of love… for the directors and the kids.

When the band was formed, Ernest couldn’t even GET the music he needed here in the United States. In those pre-internet days, sheet music for a German Blaskapelle wasn’t’ something that you would find in your average music shop… and no one even knew how to order it. Then on a trip to Germany he found stacks of music sheets for the band in a German Store. With suitcases full, he returned to Wisconsin, started the Junge Kameraden Band, and got the kids playing.

The Blaskapelle plays fun standards like “In München steht Ein Hofbrauhaus”, they even do “Ein Prosit” ( I presume that the kids prost with root beer)… but then they surprise you with a hauntingly beautiful rendition of “Das Echo vom Königsee” (“the Echo from Konigsee”).

And how do the kids feel? We had a chance to speak with some of the band members after their performance. They are all quite proud of what they’ve achieved. This music, these songs, in a sense they are a gift to their Omas and Opas. It’s a connection to a culture that they’ve grown up with, even if they’ve never actually been to Germany. (In fact, one of the things that really struck me at Germanfest was how FEW people have ever been to Germany, and that even fewer speak any German at all.) But that doesn’t really matter… what matters is that the music carries on. 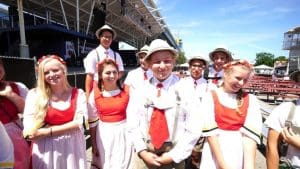 When you hear music like this, you don’t want it to ever end. Thanks to the Plymouth Junge Kameraden for helping to keep German Music and Culture strong in America. 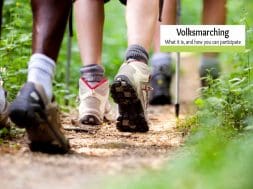