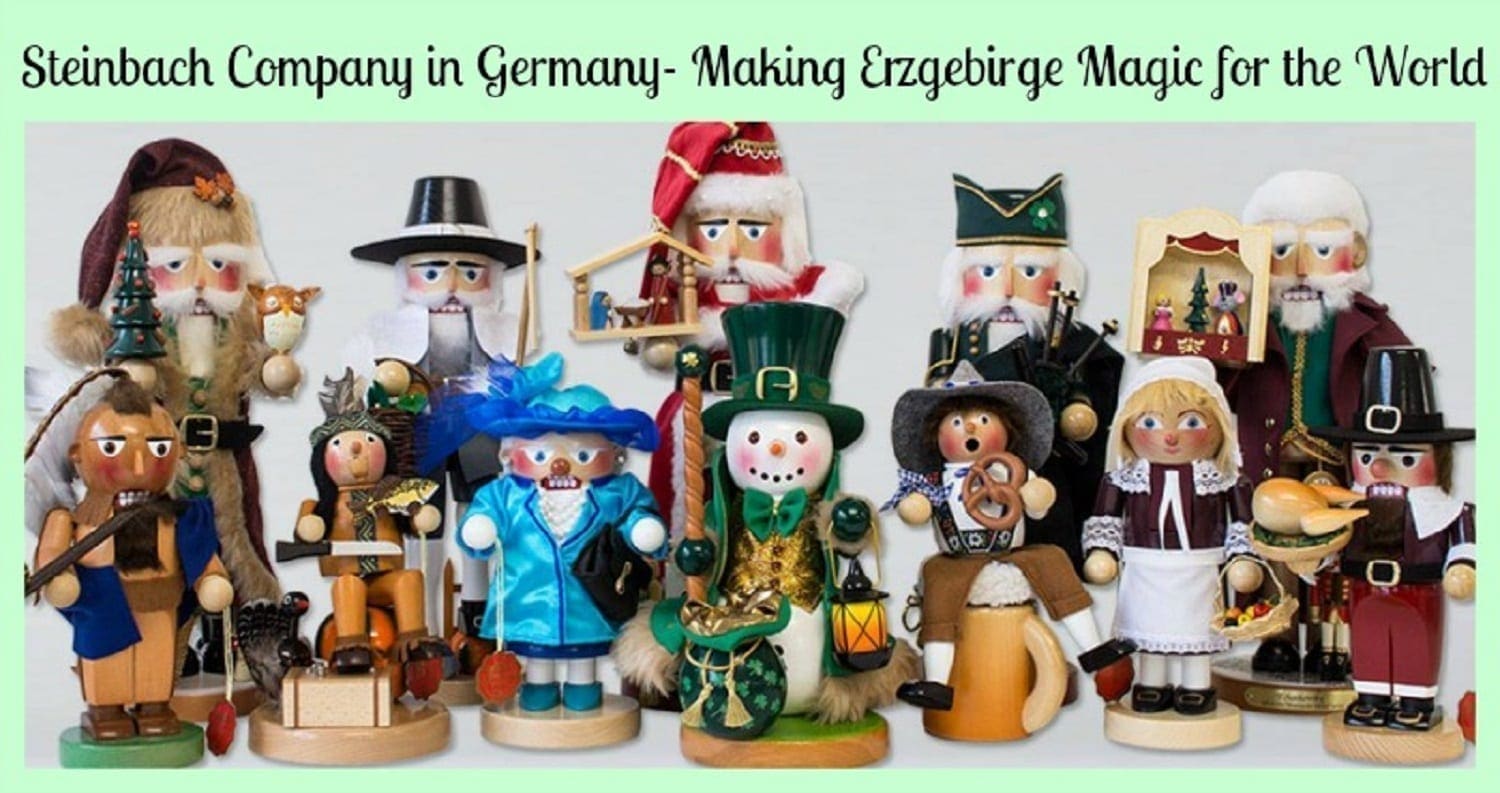 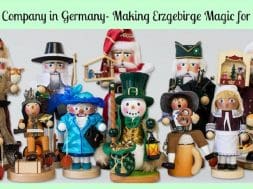 “We want to bring the Erzgebirge magic into peoples homes all over the world.”

While scrolling through Facebook recently, I came across an interesting comment on the Steinbach Nutcracker fan page… it said that the Steinbach Company in Germany had been purchased, and the factory was up and running again. WHAT! I did some digging, and couldn’t find much… so, I sent a message to the gentleman who made the comment, Robert Liebich, and struck GOLD. Turns out, Herr Liebich is the partner of Rico Paul… the man who purchased the Steinbach company. Together, they plan to bring the company back to its former glory. Herr Paul brought back many of the original woodcarvers, painters and assemblers. And although they have modernized a few things, (including the logo) those delightful Nutcrackers and ornaments will still be made the old fashioned way… by hand.  The emphasis for Steinbach Volkskunst is to bring back the Erzgebirge Mountain magic so many of us grew up with.

In 2017 Steinbach Volkskunst had booths at the Christmas Markets in Atlanta and Carmel/Indianapolis. And in 2018, they plan to attend more Christmas Markets where you can meet representatives of Steinbach, and see everything first hand. Best of all,  you can already see (and even buy) all of their products from the website–> www.steinbach-shop.com

I am delighted to hear that this iconic German company is back in operation. In this world of cheap factory-produced plastic stuff, it’s good to know that there is still room for hand crafted quality.

Want to know more about the Steinbach Company in Germany? Herr Liebich sent me this information… in English and German. All photos used with his permission.

After the death of company head Christian Steinbach, and the advent of the global economic crisis, the long-established company had to file for insolvency. During that difficult time, the young entrepreneur Rico Paul from Dresden developed an interest in Steinbach. He learned about the bankruptcy and the shutdown of the factory from an U.S. newspaper. Right away he knew that the Steinbach brand, the company, as well as those beautiful nutcrackers, need to be salvaged. Already as a child, Mr. Paul marveled at his dad when he was carving figurines at his lathe. That was when he discovered his love for wooden art.

Together with employees, some old customers and suppliers, he created a concept to keep the tradition, but also make it more modern. The first months now lie behind us. Our main factory is back in Marienberg in the heart of the Oar Mountains. New marketing activities were designed, new sales channels acquired and old customers became friends.

The brand does have a new signature with a strong awareness for traditional values. The logo was modernized, packaging, brochures and catalogues got a new fancy design. New colors, shapes and fonts embellish the companies performance. Support for this digital makeover came from Mr. Pauls business partner Robert Liebich, who also carries the Oar Mountain gene. When he was a child, he loved to watch his dad assemble the hand-carved pyramids. 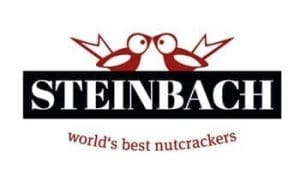 Together, Mr. Paul and Mr. Liebich have a vision for Steinbach:

“We want to bring the Erzgebirge magic into peoples homes all over the world.”

Meanwhile, the Steinbach Volkskunst GmbH became a family business again. Mr. Pauls and Mr. Liebichs children are designing their first Nutcracker line drawings, and their dads both work at the production department every now and then and support them with their handicraft skills.

A new era has started.

With modern structures and traditional handicraft, Steinbach will face a secure future.

At the end of 2015, talks were held with the main customers in the USA, some of whom were still bound by the company’s old contracts. After their cooperation commitment, the reinstatement of the employees, who were previously dismissed in the course of the insolvency, took place at the beginning of 2016. As a result, the production teams for the location in Marienberg were put together and production resumed. In March 2016, after a half-year forced break, the factory started up again with 35 employees, and the first nutcrackers from Steinbach Volkskunst left the factory.

After the production resumed, the challenge was to get back to the usual, first-class quality. During the first year, Mr. Paul monitored this process carefully, and the employees were trained to reflect on their work in a self-critical manner, in order to independently report the foremen on quality deficiencies. In addition to the production site in Marienberg, the administrative headquarters were opened in Dresden. Four employees handle sales, human resources, accounting, logistics, marketing and management.

In the summer of 2016, after the production was underway, a process began that would set up the foundation for the reconstruction of the traditional brand. Responsible for this was Robert Liebich, who analyzed and turned out the brand values, and then accompanied the logo and design relaunch with his signature. The result was not a radical redesign but a loving relaunch of the elements of the past combined with a modern look.

With the success of the new management and the restructure created in 2016, the first orders after the insolvency were successfully completed and demand increased again.

The year 2017 had a good start. The order books were full and production was in full swing.

To satisfy the demand, additional employees were hired and new structures were introduced for the production management. In addition to the company administration in Dresden, a production administration was set up directly in the factory. Now, a team of three takes care of the needs of the factory, such as Logistics, Purchasing and human resources. Furthermore, a modern ERP system was introduced so that technically a new standard will be reached.

To professionalize the production, an experienced factory manager, Mrs. Kerstin Bleimeier, was hired in November 2017. She trained in the traditional profession of wooden toy making,  and followed this with master craftsman school, where she graduated as one of the youngest masters in Germany. After her training, she worked for several years as a production manager, and later in her own business. Since November, she has been permanently optimizing the processes in Marienberg, and is the link between the workforce and management.

In addition to the changes listed above, new products were created and new customer groups developed. Since the end of 2017, the company has its own showroom in Atlanta, which is open  for various trade fairs, and to display samples for their vendors. With this presence, Steinbach hopes to create excitement with the specialist dealers, and revive the business. But not only dealers benefit from the reorientation of Steinbach, the end customers should also be happy. The new online shop www.steinbach-shop.com has been available since November 2017 and the first Christmas markets were held in Atlanta and Carmel/Indianapolis, where customers could speak directly with Steinbach representatives, and, of course, could also buy the popular nutcrackers.

The year 2018 will be very exciting again, and there will be lots of news from Steinbach. Currently we have 60 employees and the signs are pointing to growth. The Christmas market business will be further expanded in 2018 and many more stores will be added. At the markets, people may even have the opportunity to get in contact with the new management. Because, Mr. Paul and Mr. Liebich are often personally on site.

Thank you again Herr Liebich for taking the time to share this wonderful news with us. I’m excited to know that Steinbach is back in business, and has an eye on the future!

Looking for one of Steinbach’s wonderful new Nutcrackers, Ornaments or Smokers?… head to their website. The Steinbach Company in Germany

The articles are in Germany, but remember, if you are in the Chrome browser, you can click the squares on the right end of the URL bar for a translation

0
0   0
previous Shopping for German School Supplies- It's Much Different than California
next Playmobil for Easter- Fill the Easter Basket with Bunnies & Eggs that Last!

The Linden tree in Germany – At the Heart of Germany