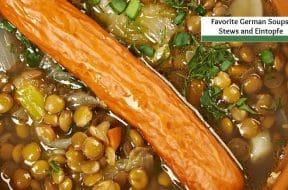 German Foods and Recipes
German food often gets stereotyped as consisting mainly of large hunks of meat or sausage. But that really doesn’t tell the whole story of German Cuisine. I grew up eating German Soups, Stews and Eintopfe. At least once a week my mother would cook a hearty soup or Eintopf  that, along with with a slice […]
Read more