Whenever anyone asks me “What’s your favorite kind of Cheese?” my automatic answer is “the melted kind”. And yes, I have the kind of family that loves cheese, eats loads of cheese, and spends a lot of time talking about cheese. It’s no wonder that there were loud CHEERS when I brought home the Raclette Grill. Where has this lovely dish been my whole life? Granted, it’s Swiss… but the Germans have wholeheartedly adopted the tradition, especially on New Year’s Eve. This melted cheese dish is not only great for a delightful and memorable dinner party, it also makes the family happy. All this with minimal cooking and preparation time! (It’s a dream come true) So, what is Raclette Cheese… and how is it served?

Raclette refers both to a type of cheese, and to the device used to serve make it. And no, it’s not fondue (in fact, Raclette pre-dates fondue by a few hundred years). The original Raclette (still found all over Switzerland and in many German Christmas Markets) takes a half wheel of cheese, and clamps it into a holder under a heat source. The heat melts the cheese. The melted cheese is scraped off  onto whatever you want smothered in cheese (raclette means “to scrape”). Little boiled potatoes are traditional, as are veggies, bread, Aufschnitt, and mushrooms.

(I can see some of you thinking ahhhh like Fondue! Well, no. Fondue is a communal pot that holds a sauce of melted cheese, wine, and seasonings that everyone around the table DIPS bread (or other things) into. Raclette lets you have your own plate, and the cheese goes on top.)

What is Raclette Cheese

Raclette Cheese is a semi-hard cows milk cheese from the Alps. According to one of my kids (and my nose) it’s kind of a stinky cheese (not as stinky as some, but you will definitely smell it). When melted it goes all creamy and gooey.

These days, I find Raclette Cheese in my local stores (usually as slices), but you can order slices or whole Raclette cheese online.

Can’t find Raclette Cheese? (and you don’t want to wait for your order?) If you are using a Tabletop Raclette Machine, you can go ahead and use an Emmentaler, or other Swiss Cheese. (shhhhh… We’ve even substituted Cheddar … just don’t tell the Swiss!)

Sure, the half wheel of Raclette cheese with a giant heating element is very impressive, it’s not practical for home use (mostly, because of storage). Thankfully, there are little table-top Raclette Grills that not only work like a dream, they are super fun! Who doesn’t love cooking their own meal at the table?

On top is a grill for cooking or heating up meats or veggies. Under the grill is a shelf for little pans (coupelles) that are heated from above. Into the pans go your cheese. Slide it under the grill… and watch it go bubbly. When it’s sufficiently melted, you can pour the cheese potatoes, meats (like the ones you grilled) or veggies (same).

Or you can just eat the cheese straight (like my daughter). 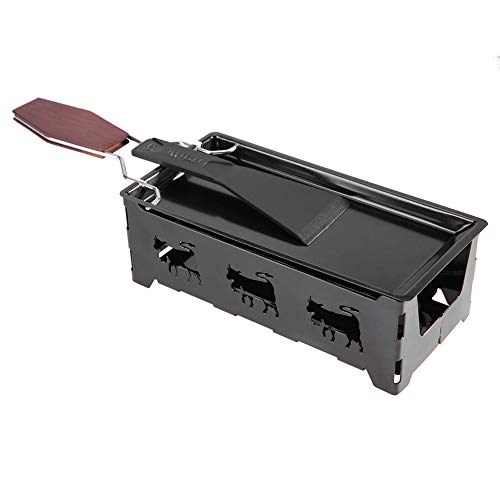 Where to Buy Raclette Cheese 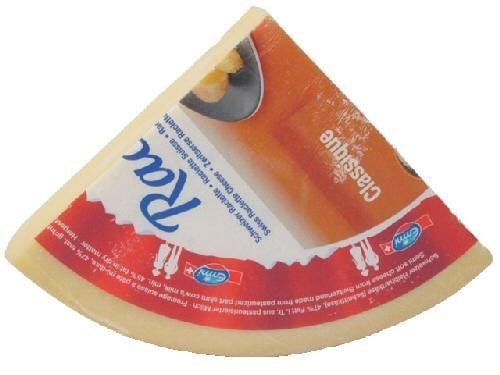 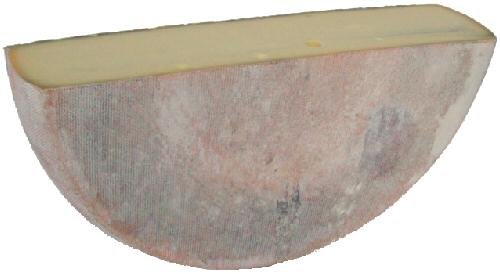 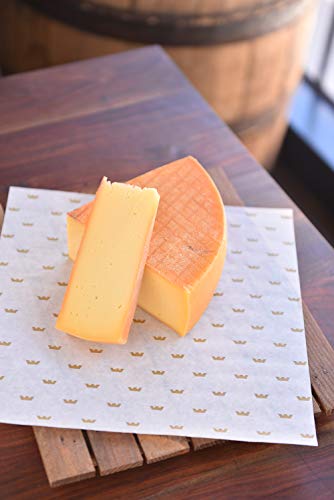 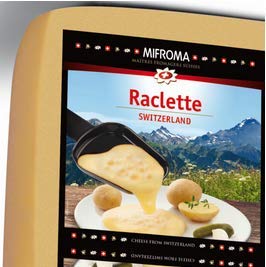 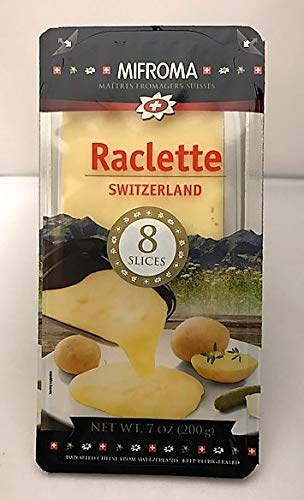 I use this one… it has a grill and a stone on top, and 8 little trays to melt the cheese. Perfect for parties or family gatherings (and my son borrows it a LOT when he has friends over). It was reasonably priced, and packs away in its box. 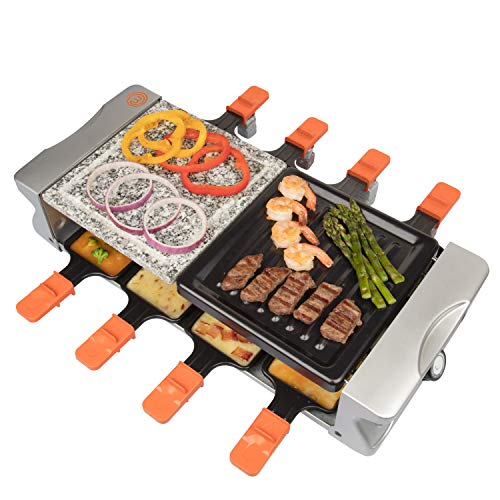 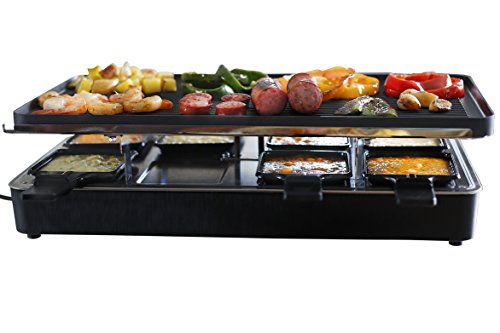 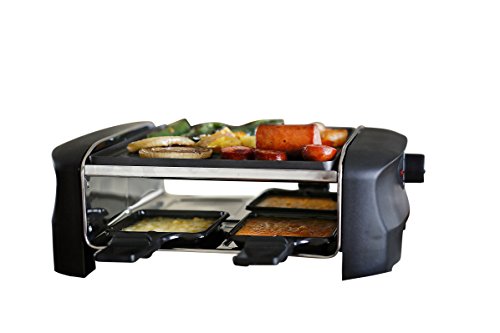 Milliard Raclette Grill for Four People, Includes Reversible Non-Stick Grilling Surface, 4 Paddles and Spatulas – Great for a Family Get Together or Party 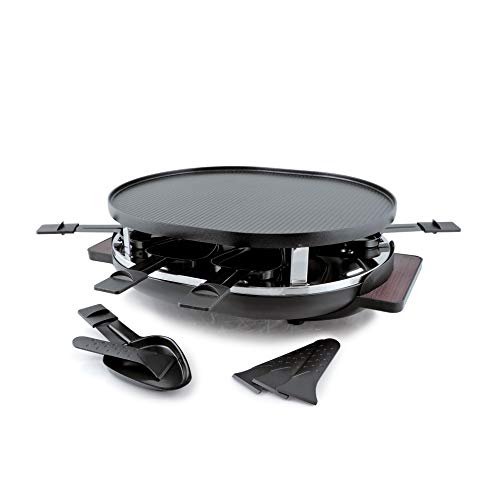 And of course… the Raclette Wheel Holder! 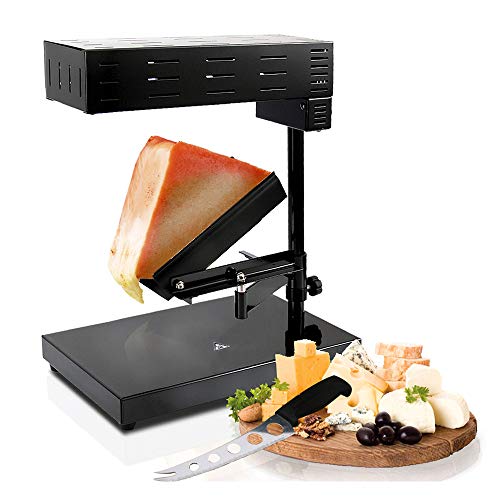 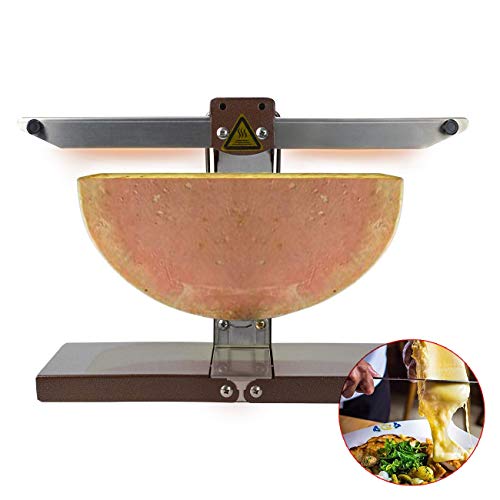 What to Serve with Raclette

Set the Raclette Grill in the middle of the table. Surround it with bowls of different options for people to choose from. Try for a balance of fresh veggies and fruits, pickled veggies, meat (if you want it), and of course, the potatoes. Truly, there are not hard and fast rules… if you like it covered in cheese, you can serve it.

Make sure everyone has a plate and a wooden scraper to get the cheese out of the pan without scratching it… and let it happen.

Traditionally, Raclette is served with tiny boiled potatoes.
Boil potatoes in salted water until they can be easily pierced with a knife. Drain and keep them warm by wrapping them up in a tea towel.

Grill vegetables on the top surface, then cover with cheese-
I like to pre season the vegetables before setting them to the table.

We also grilled slices of sausage

Put food INTO the pan with the Cheese to grill

Fruits work as well- Place them on the grill top, or just cook them in the pan with the cheese.
Figs
Pear Slices
Apple Slices

I like to warm and slice a baguette to go along with the Raclette.

Serve with a crisp white wine! (But my people seem to prefer beer)

There are LOADS of recipe books and recipe ideas available! 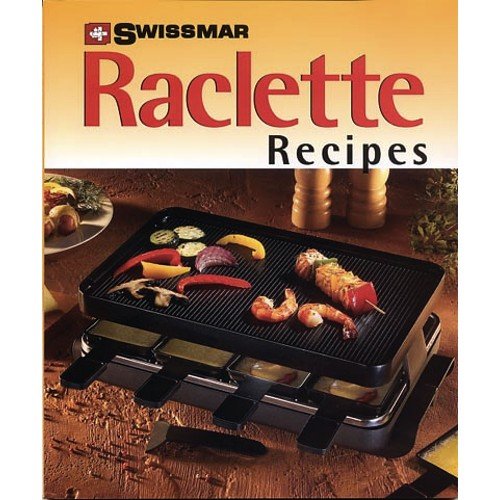 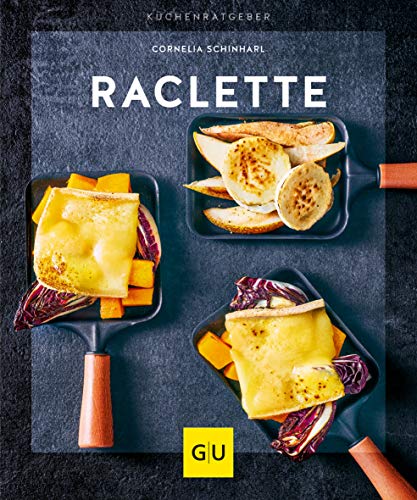 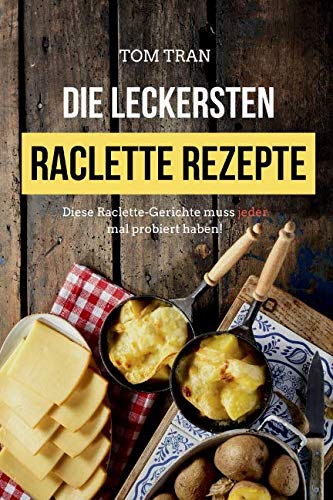 0
0   0
previous Gebrannte Mandeln- German Roasted Almonds Recipe
next Why is it Called Silvester? And other New Year's Traditions in Germany