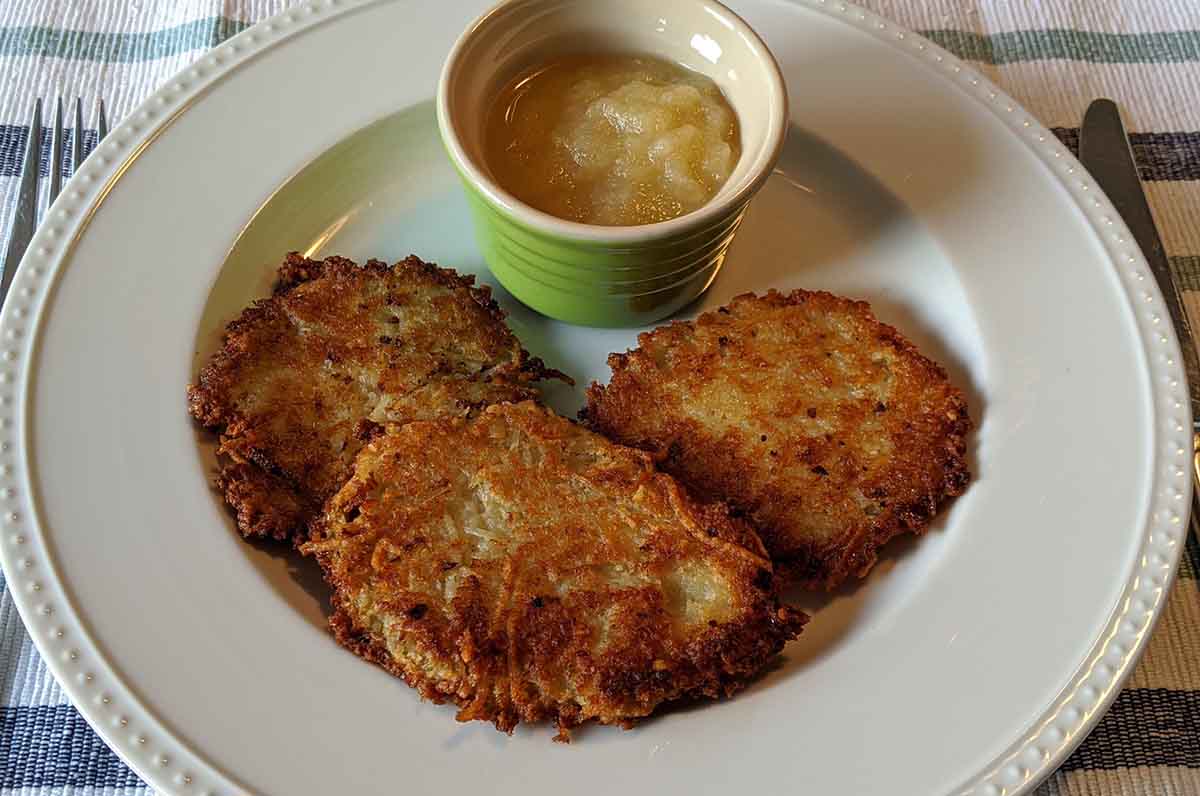 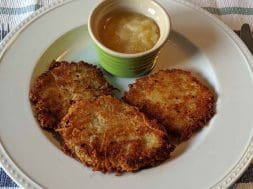 According to my daughters, potato pancakes (Kartoffelpuffer) are the BOMB. How can you go wrong with fried potatoes? And, since I use my mother’s recipe which adds BACON, these are lick your plate just amazing. File this Authentic German Potato Pancakes recipe into your comfort food file, and make them whenever you need to serve something that makes the whole family smile. With or without the bacon… this easy recipe comes together in a snap, and hits the table in less time than a fast food run.

Edit- Many people felt that my “grate potatoes with a food processor” was not authentic enough. Fine. But I’m still not using a hand grater. I’ve now included instructions for making Authentic German Potato Pancakes with the food processor AND a small extra step to give it more Pancake texture and less Hash browns texture (I still used the food processor, because I didn’t want to add the authentic ends of my fingers that always get scraped off when I use a regular grater). 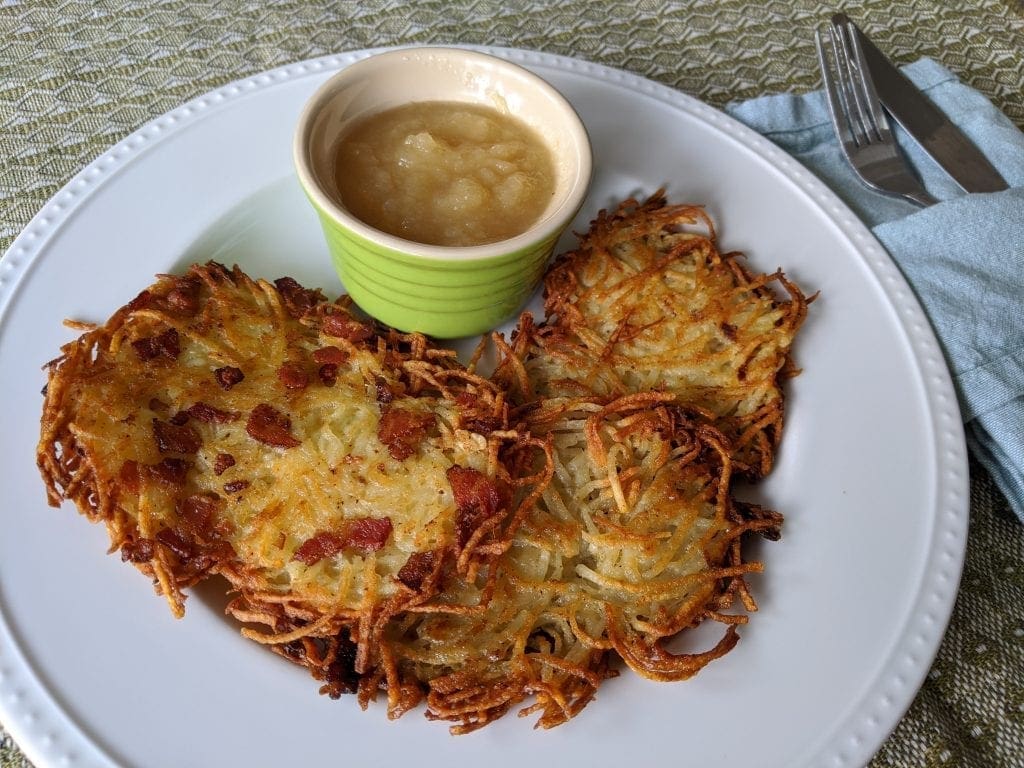 After digging through my stack of German Cookbooks (Heimathäppchen, Landfrauen Kochen, Dr Oetker) trying find a recipe that looked like the recipe I grew up with, I finally called my mom. Those of you who are wondering why I didn’t START with that phone  call clearly have never tried to pry a recipe out of a German Cook’s brain … “just peel some potatoes, don’t forget the onion, you need oil….” I needed exact measurements to share. (Currently I use the same method as mom… “peel a lot of potatoes”)  I could find measurements everywhere, but two key steps were confusing me. My mother always made her Kartoffelpuffer in the BLENDER. And she always made them with Bacon bits. I sort of figured out that she wasn’t alone with the Bacon. In the Rhineland and Westphalia it’s not unusual to find ham with the Potato pancakes. And since according to my dad when I was growing up, a meal without meat wasn’t a meal, in goes the bacon. (He’s since learned the joys of salad).

But the Blender?  So I asked…. I was really expecting to get special wisdom, “it increases crispiness” “it makes them taste like magic”… Her answer “I didn’t like grating the potatoes because I always cut my fingers on the grater, and I didn’t have a food processor.” (Sometimes, the obvious answer stands right in front of you. I’ve used my food processor to do this for years)

But it seems the blender does more than grate the potato… it turns the potato/onion mixture into more of a pancake batter. So I’ve devised a hybrid that gives you that texture, but still has some crispy bits on the edges. In a way this is 2 recipes. (Or maybe it’s one Main recipe with variations?) Think about the flavors you remember from home. My mother didn’t add salt to her Potato Pancakes, because my father really liked Zuckerrübensyrup (sugar beet syrup) on them (I know… he also liked meat… it was an entertaining childhood). But we had salt on the table. You can make them with Bacon pieces or without. And you absolutely SHOULD serve them with Apfelmuß (Apple Sauce) or Rübensyrup, if you like that too…

Serve warm (although no one has ever turned them down cold) 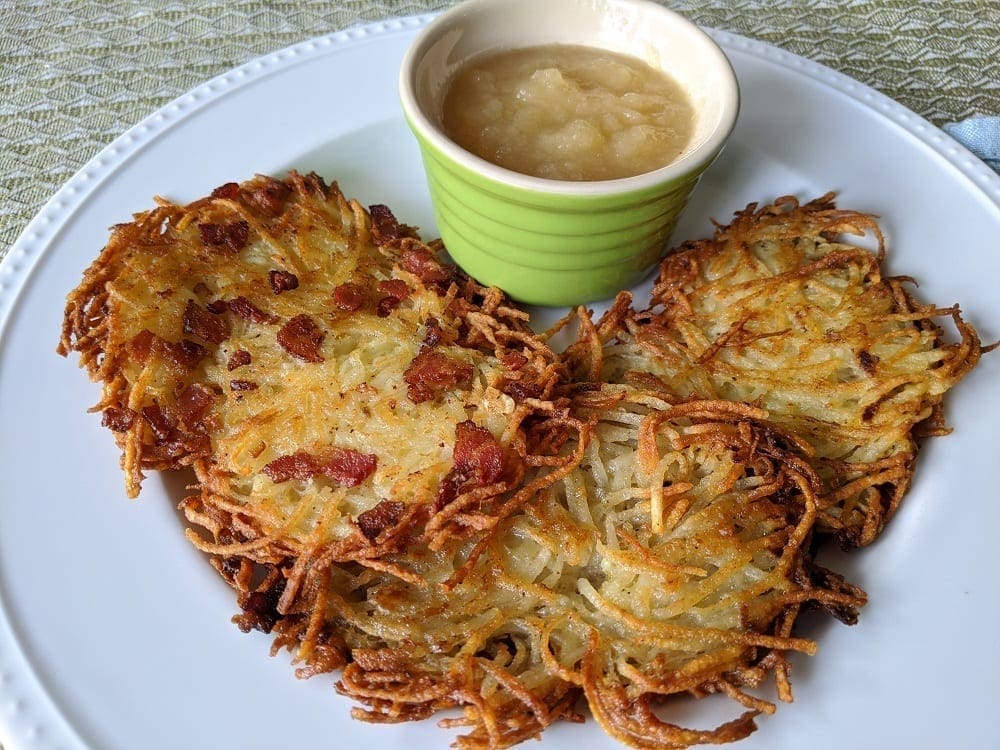 The recipe makes 7 4-5 inch Potato Pancakes (aka a Single Serving for the average teenager). It can be doubled, tripled, or multiplied to feed an army.

Set up a work station:

How to Make Authentic German Potato Pancakes Step By Step

Peel the potatoes… believe it or not, this is just over a pound, what the recipe calls for For a SMOOTHER Potato Pancake Batter (and according to many Oma’s, a more authentic Pancake) For a more Crispy Potato Pancake

Combine the grated Potato and Onion… use the FINE side of the grater, or the fine grater on the processor. Watch your fingers. Or make them without bacon Flip after 2 minutes… you want golden and crispy edges -7
14   7
previous Würzfleisch Recipe from the DDR
next What is German Baumkuchen? And Where Can You Get Some?