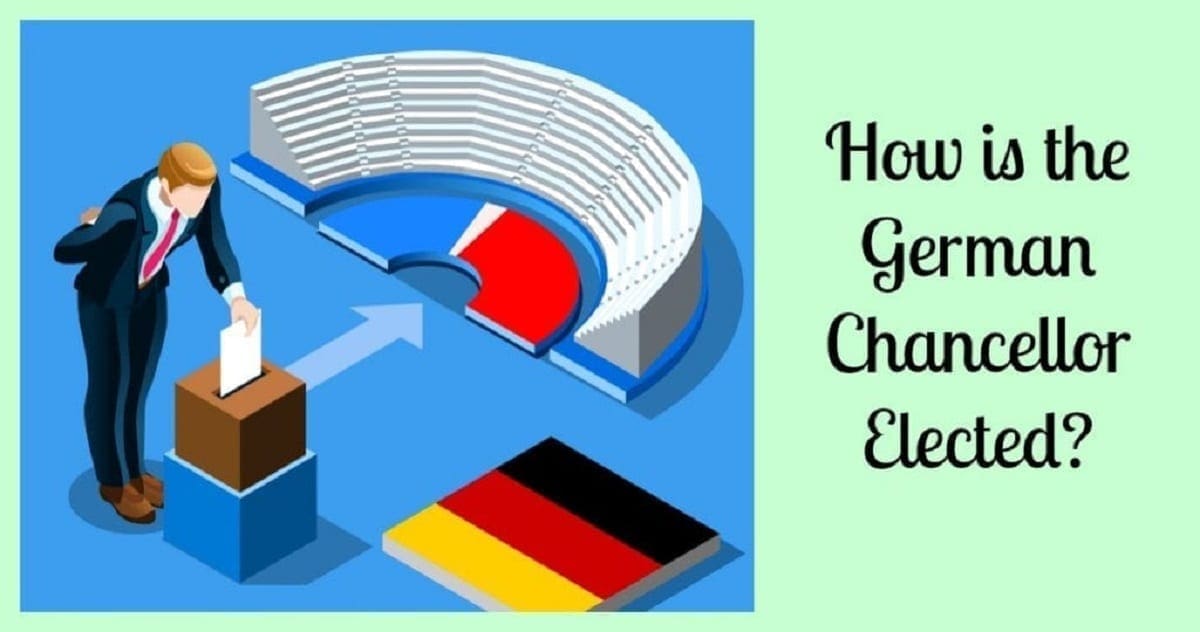 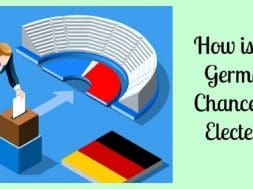 For people who live outside Germany, the German election system may seem a bit confusing. Just how is the German Chancellor elected? I’m going to do my best to give a concise explanation to help you understand how their system works. For the record, I am not endorsing any German Political Party, this is just an informational article to try and help people get a handle on a system that is different from what we have in the United States.

The Federal Government of Germany has a Chancellor AND a President. But for the sake of comparison, the Chancellor most closely aligns with the American President or the British Prime Minister. (No, it’s not exactly the same…).

What does the German Chancellor DO?

Basically, the Chancellor runs the government approved by the Cabinet and President.

For more information about the German President, click here

According to German Basic law, elections are to be universal, direct, free, equal, and secret. Anyone over 18 is eligible to vote, and the vole ALWAYS takes place on Sunday. (Amazingly, they see about a 70% turnout!) Every four years, German citizens are called upon to elect members of the Bundestag, which is the Legislative branch of Government. (You can sort compare this to the American Senate and House of Representatives combined). The Bundestag representatives are responsible for assessing and amending the laws and legislation put forward by the Executive Branch. They hold debates and oversee the government. But (and this is the important part for this weekend) they are also responsible for electing the Chancellor.

The Chancellor of Germany is NOT elected directly by the people. Instead, people vote for a party, and the party puts forward a candidate for chancellor. The party with the majority in the Bundestag… either alone or in a coalition with another party or parties… wins. This is called a personalized proportional representation system.

The Bundestag needs to fill 598 seats. Half of those are filled by direct vote, the other half by political party percentage.

How do German citizens vote for their Candidate?

The German Ballot has 2 columns. 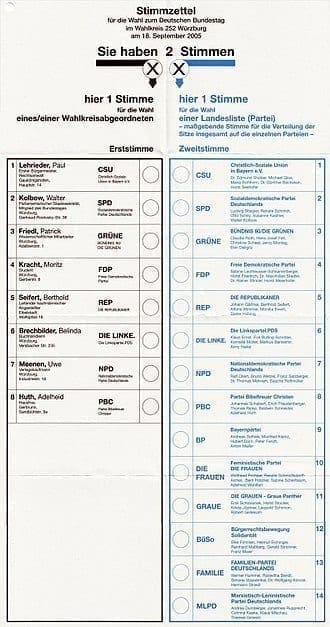 The first column, the “Erststimme”, has a list of candidates running for the Bundestag in the voter’s district. So when Hans goes to the polls, he can vote directly for the person he wants to have represent him in the Bundestag. Germany is divided into 299 voting districts… the winner from each district gets a seat.

The graphic below shows the 299 voting districts (outlined in pink). The grey line shows counties… and the thick black line delineates the 16 German states. (Think of the voting districts like American Congressional districts. These are more of a direct representative. 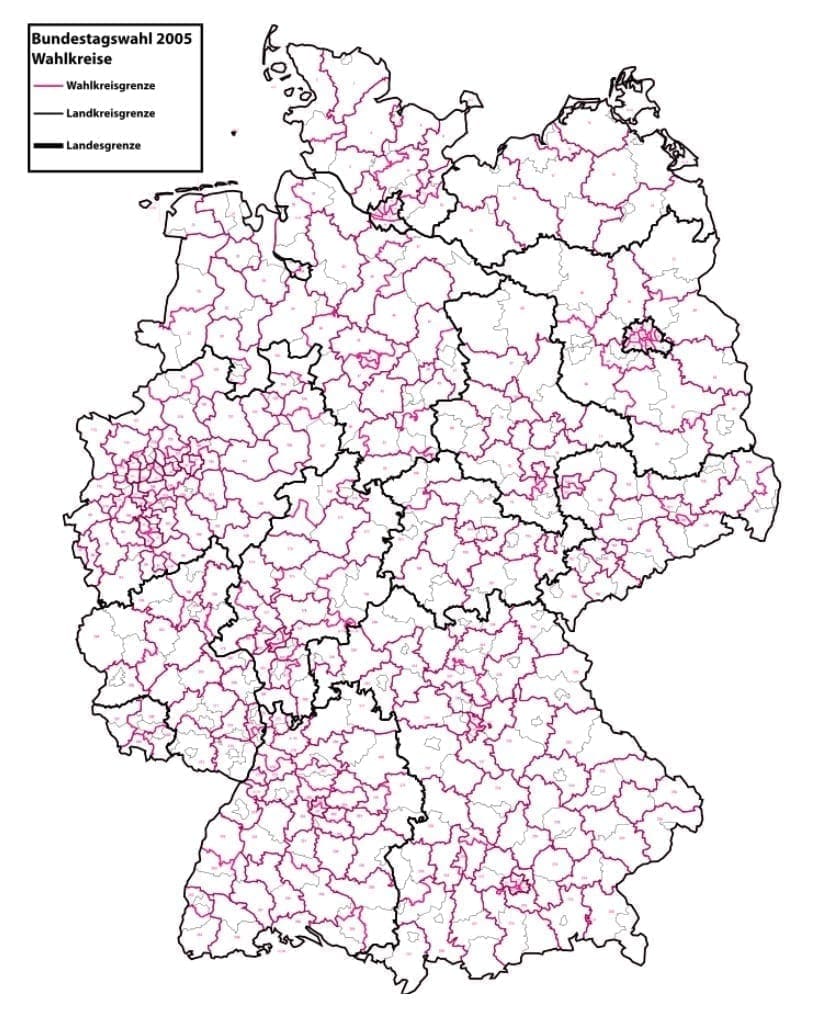 The second column, the “Zweitstimme”, lists Political Parties. Hans gets to vote for the PARTY he prefers. Each party in Germany’s 16 states put together a list of candidates for these seats. These votes are then tabulated, and as long as a party gets more than 5% of the votes nationwide, they get to fill the other 299 seats of the Bundestag in proportion to how many votes they received. (note- the 5% rule was put in place to keep small radical parties from gaining power… there is an exception to the 5% rule, if one of these parties wins seats in 3 constituencies, they get their seats).   Basically, if one party gets 28% of the vote, then they get to fill 28% of the 299 seats. So, the size of each state, combined with the party’s result for each state determines where the candidates come from.

Now, one confusing issue comes when a person votes for a direct candidate from one party, then for a different party in the second column, you end up with goofy numbers. Suddenly, a party that should have a higher proportion of votes ends up with too small a percentage. To balance this, there are “Overhang” seats. Basically, they add extra seats to the Bundestag so that the Party Percentage reflects the percentage of the 2nd column vote. (The constitution allows for a total of 880 seats… that’s  a lot of overhang).

So… How is the German Chancellor Elected?

The newly elected Bundestag then picks the Chancellor.

But how do they decide who to pick? Within one month of the election, the Bundestag meets to choose the Chancellor. The political parties each have leaders who are put forward as candidates. (These leaders are also listed on the left side of the ballot for direct representation… this gives the candidate 2 chances to get to the Bundestag). The winner is determined by a simple majority. Problem is, no one political party generally has a majority. This is where coalitions come in. Since there are so many political parties at any given time (this election there are 22 parties! But only 9 will have candidates in each State), parties will come together to create a majority (there is a little give and take … and promises made). NOTE- There are no Term limits as to the office of chancellor… Helmut Kohl held the position for 16 years.

Does the System work?

This system has been in place for 70 years. After World War 2, power was transferred from the President to the Bundestag. The reasoning is that political majorities would be closer to the needs of the people, yet would still have to work with other parties to function.

I hope I was able to answer some basic questions about the German Election system. Now we just sit back and watch what happens. 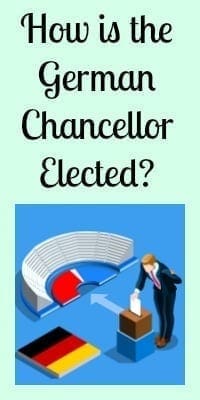 tags: how is the german chancellor elected
0

0
1   0
previous What is Federweisser? All you Need to Know About this VERY Young Wine
next What is a Tante Emma Laden? A Corner Store with a Special History 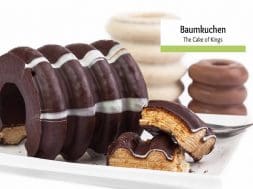