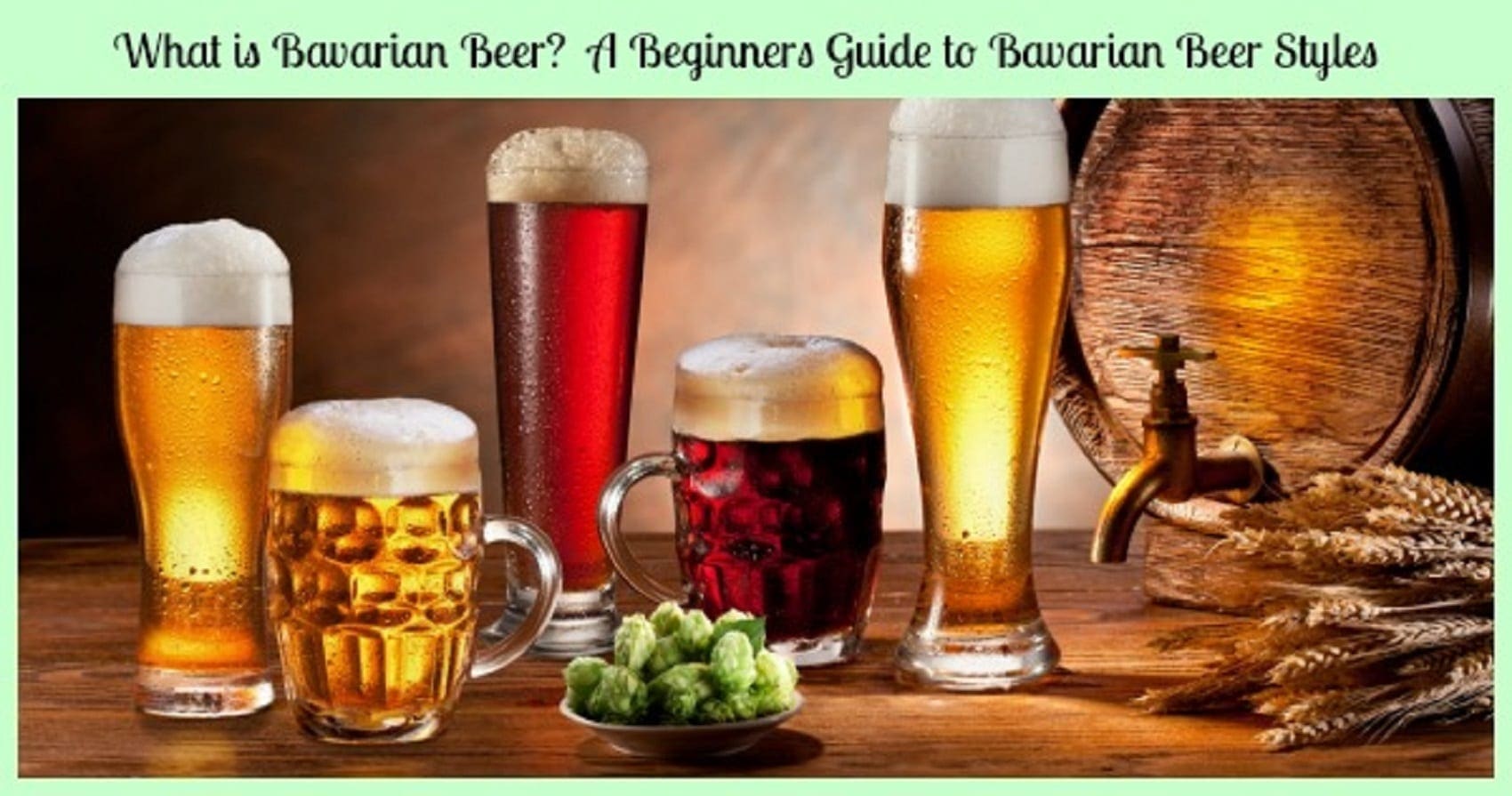 German Beer and Wine
German Foods and Recipes
May 31, 2017
karenanne 0 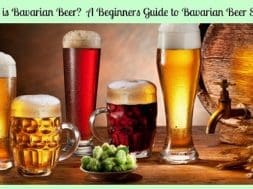 Bavaria, in the heart of Southern Germany, is world-renowned for its beer, and this region has given birth to a wonderful array of brews. But what differentiates the diverse beers of Bavaria, and which kind most perfectly suits your taste? Sit down in a Gasthaus, or visit a BierGarten, and suddenly, you are faced with a selection No one wants to look foolish! Or hold up the line! Here is a beginners guide to Bavarian Beer Styles, perfect for familiarizing yourself with the basic Bavarian Beers, so you can look like a pro ordering them!

What is Bavarian Beer? Beer is one of the oldest Beverages that humans make… in Ancient Egypt, partially baked bread loaves were put into water to begin fermentation…. Carry that forward to the Middle Ages, and in Germany, especially Bavaria, beer is referred to as “Liquid Bread”! The high calories would often compensate for the lack of food. Today, although food resources are much more available, Beer is still an important part of the diet. The average Bavarian drinks 150 liters (around 40 Gallons) of beer per YEAR! That’s lot! But… what are the differences between the Bavarian Beer Styles? And which is best for you? 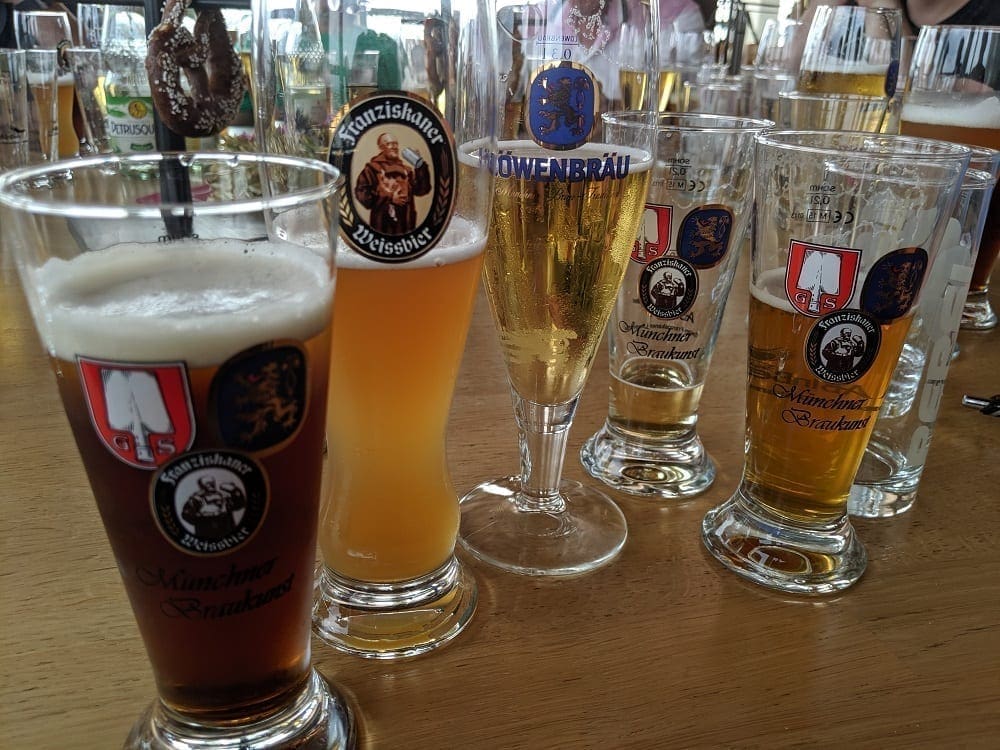 What is the best Beer for YOU? Light or dark? Pils or Weissbier? And what makes Oktoberfestbier special?

(So you know… a LOT of beer was sampled in the creation of this post….) Pilsner (named for the Bohemian state Pilsen)  is a type of lager known for its slightly earthy, hop-forward flavor and light straw color. The beer is made with a very lightly Malt, slow cold fermantation, and is cold lagered (and those Lager Kellers are COLD). It is extremely popular in Germany and throughout Europe. Bavarian Pilsner, following the trend of other beers from the region, is more malty and less hoppy in flavor than those of northern Germany, which have a noticeably more floral aroma. It runs about 5% alcohol content.

Unlike most other varieties detailed here, Pilsner is usually served in a 0.3-liter stemmed glass. Although not the only pale beer found in Bavaria, Helles is the variety that is perhaps most closely associated with Munich. Its name is derived from the German word hell meaning “light” or “pale.” A bottom-fermented ale, helles is characterized by a pleasant lingering maltiness, with hints of sweetness and a mild, less prominent hop flavor when compared to a Pilsner. Because it tends to be between 4 and 5 percent alcohol by volume (ABV), it is perhaps the most appropriate “easy-drinking” beer for a longer drinking session with friends — which also may be why it has seen a recent increase in popularity in the region. Dunkel (meaning “dark” in German) is a term used to describe many types of darker German beer, and indeed, ordering ein dunkel in a bar will usually mean whatever dark beer is on tap. Historically popular, Dunkel-type beer has given way to lighter varieties such as Pilsner and Weissbier in recent years.

In Bavaria, Dunkles tend to be deep red in color, with dark toffee and caramel aromas. The roasted malts used in its production produce a smooth, rich flavor that is not as strong as the more powerfully brewed Bockbiers. But don’t kid yourself… Dunkels are STRONG, but only up to around 5.6%. (In fact, on our visit to Kloster Weltenburg, the waitress did NOT want to serve out table the Dunkel! She said it was too strong, and the heat combined with the beer would do us in.)

Weissbier is also called Weizen beer or Wheat Beer. Made using at least 50 percent wheat, Weissbier is a yeasty brew with a characteristic citrus-fruit flavor and a refreshing aroma with hints of banana and spice. (I honestly don’t understand WHY it tastes of Banana, but it does). The head is fluffy and rich, and as Bavarian Weissbier typically are unfiltered, the color is a cloudy, pale gold, unless you choose a Bavarian Dunkles Weissbier (confusingly, a “dark white beer”). Here, the light gold hue gives way to a dark reddish-brown, with a much deeper, maltier flavor profile. Usually the strongest beer available in Bavarian beer halls, Bockbier can be from 6 percent ABV to 10 percent in the formidable Dopplebock brews, and even as high as 14 percent in some brews. This style of beer is made to be sipped, not guzzled, and rewards the drinker with some of the richest, maltiest flavor available in a beer, while also being exceptionally smooth. Color ranges from dark, almost black, to pale and light. Bockbiers are a winter favorite, with many Bavarians enjoying a stein or two during the colder months. However there also are varieties, such as Frühlingsbock, that are brewed specifically for the onset of spring.

And if you are lucky enough to dine at the Schneiderweisse… try their Eisbock. This is the name given to beer brewed for the world-famous German beer festival, Oktoberfest. Only six breweries that produce beer within the Munich city limits are allowed to brew beer for the festival. This beer is traditionally brewed in March and allowed to age before being served in the fall. Light to amber in color, though not as pale as a Pilsner, the beer’s flavor is slightly sweet with a gentle nuttiness, and of course the characteristic Bavarian malt notes are present and correct. Although this style is the most traditional festival beer, in recent years, the more drinkable Helles have taken over as the preferred choice among revelers. Rauchbier was once described to me as “Bacon Beer”. This distinctly smokey tasting beer gets its flavor from using malted barley roasted over an open flame. The Schenkerla brewpub in Bamberg has been brewing deep brown Rauchbier since 1678. People seem to either love or hate the meaty flavor of this beer… and the followers are quite devoted. It is a great beer for cooking!

Now… I’ve been told you can’t “sip” Rauchbier… you really need to DRINK it. And after a few big swallows it grows on you. Go ahead. I kind of think it’s like Cilantro, some people like it, and some don’t. Still, if you are in Bamberg, a visit to Schenkerla is a MUST.

Ready for some Bavarian Beer?

Whether visiting Munich for Oktoberfest or merely passing through on a whistle-stop tour of Europe, be sure to try a couple of these varieties of beer. And don’t forget to lift your stein in a traditional toast to each person at your table who begins a new drink!

Most of these Photos were Take in July 2019 on the MBA Beer Tour…. Read all about my experiences HERE–> MBA Beer Tour Germany