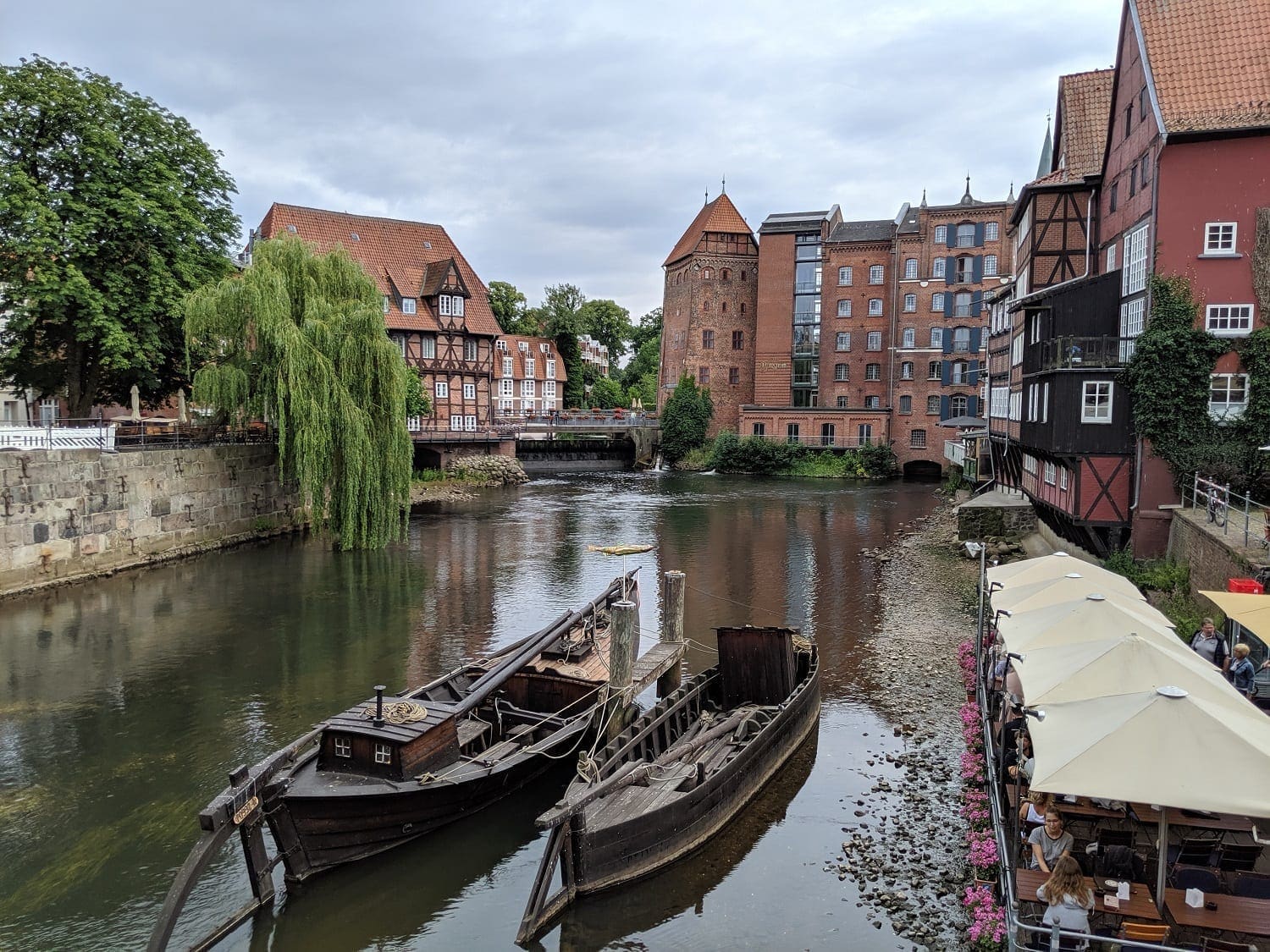 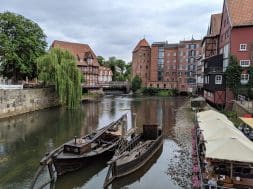 In July my daughter and I ended up in Lüneburg. This beautiful Medieval town in Northern Germany made a great “lay-over” spot between a city tour of Hamburg and our big day of hiking in the Lüneburger Heide. Lüneburg’s charm comes from it’s well-preserved Altstadt, along with a calming effect from being a Kur-Ort. Even better, it hasn’t been discovered by massive busloads of tourists. It’s easy to just lose yourself in the joy of wandering around. Frankly, that’s enough for me, but I know there are more than a few of you (my daughter included) who wanted to know what to DO in Luneburg Germany. Luckily, this University town has nightlife for younger people too. In fact, Lüneburg is the town with the second highest bar density in Europe.

But we only had one night! Let me share out adventure with you.

What to Do in Luneburg Germany

Lüneburg first got its first mention in public records in 956 AD by Otto 1, although people had lived on the site much longer. The city’s wealth came from SALT.  The salt mine was active for over 1000 years giving Lüneburg the monopoly on the salt trade in the Hanseatic League. You can see the results today, this “White Gold” meant that many of the buildings in town are Gothic brick. I realize that being on the European Route of Gothic Brick is not as exciting or romantic as being on the Fairy Tale Route, but  Lüneburg really is an amazing and impressive town to visit.

Wander around Am Sande

We started in the main town square of Lüneburg, Am Sande. The perfect place to window-shop and bummel. 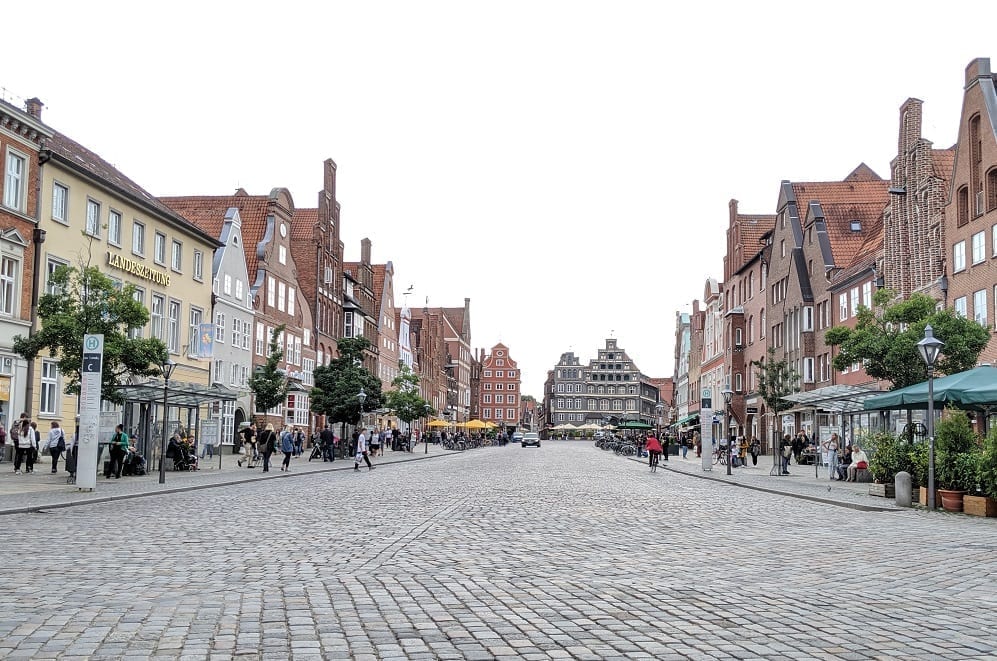 The Gothic style buildings are mostly made from brick. A sign that the town had wealth from the Hanseatic League.  Although they may be old on the outside, inside they had modern and interesting shops and restaurants. 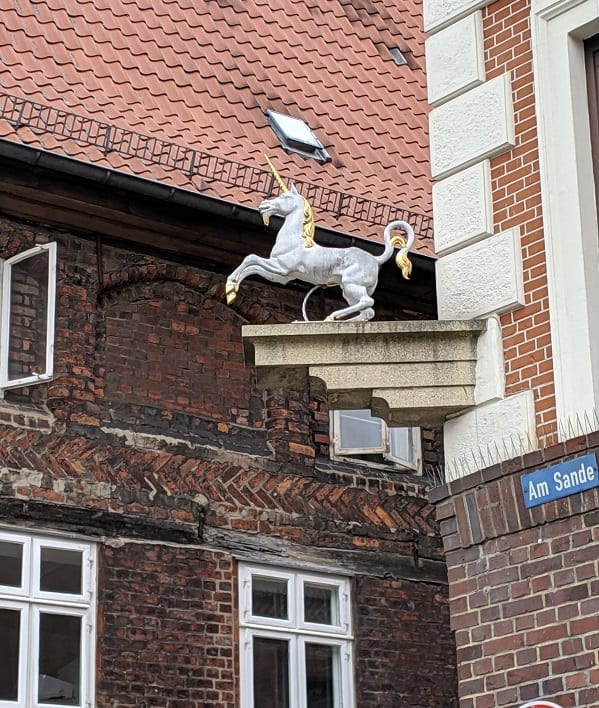 Because Katy (ok, me too) had been CRAVING a real Döner for months, we ate lunch at a place called Chilli, and watched the world go by.

The historic Rathaus (City Hall) dates back to the 1200s, and is the largest Medieval City Hall in Northern Germany. It’s quite impressive inside too. Luckily, it was never damaged by war, so the building is well preserved. Originally it was Gothic brick, like most of the buildings in Lüneburg, but a storm in the early 1700s damaged the facade, so they replaced it with the current Baroque facade. 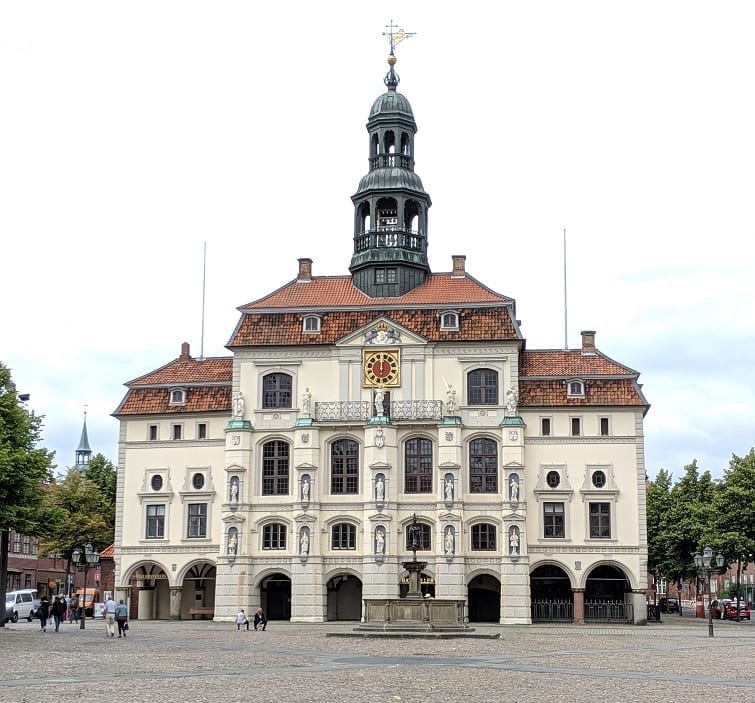 Literally, the old Crane. This old piece of engineering was critical for loading salt onto barges. Today, it’s a focal centerpiece for the harbor (this part of Lüneburg sits on the Ilmenau). 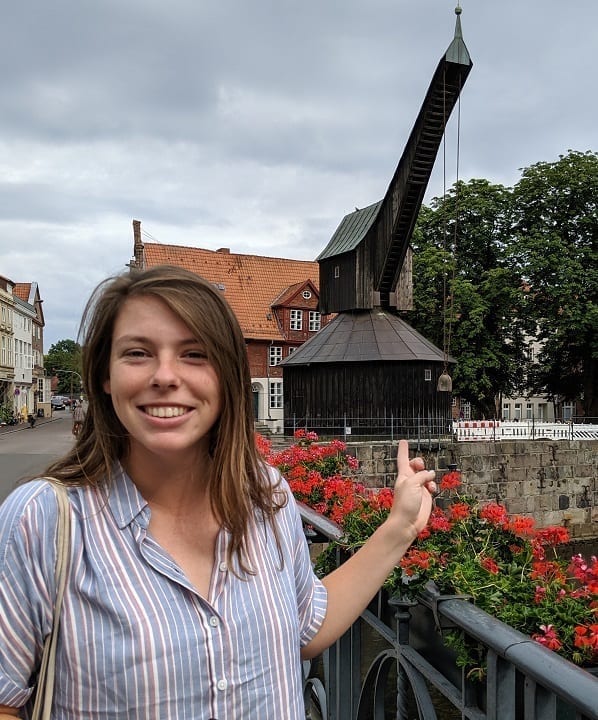 Ok, so a crane isn’t super exciting, but it sits across from der Stintmarkt. What’s a Stint? It’s a type of fish, similar to a herring. Once this was a bustling market place for Salt and Fish. Today? It’s home to some of the best bars and restaurants in Lüneburg. And on a warm summer day, nothing beats sitting by the water and enjoying the views. (Did I mention that Lüneburg is the town with the second highest bar density in Europe? ALL OF EUROPE). 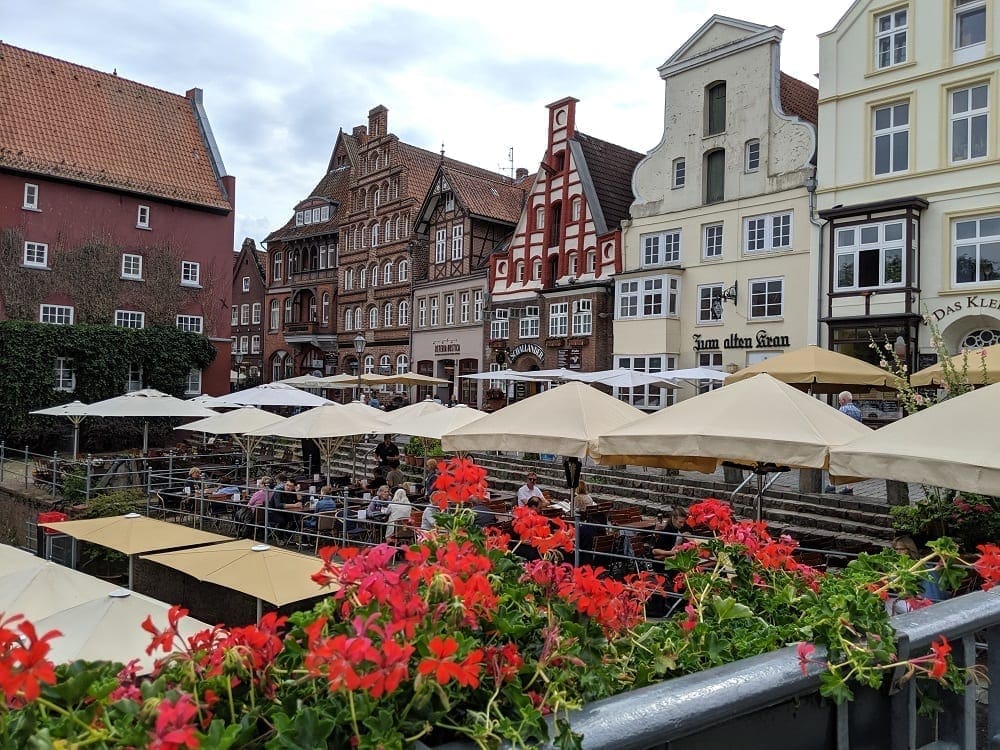 I LOVE small museums. They can be such an interesting education on a single topic. And in this case… we learned everything you ever wanted to know (and more) about SALT. What makes salt such a big deal? They didn’t call it white gold for nothing. In the time before refrigeration, salt was a food preservative. And the ability to preserve food meant the difference between life and death. 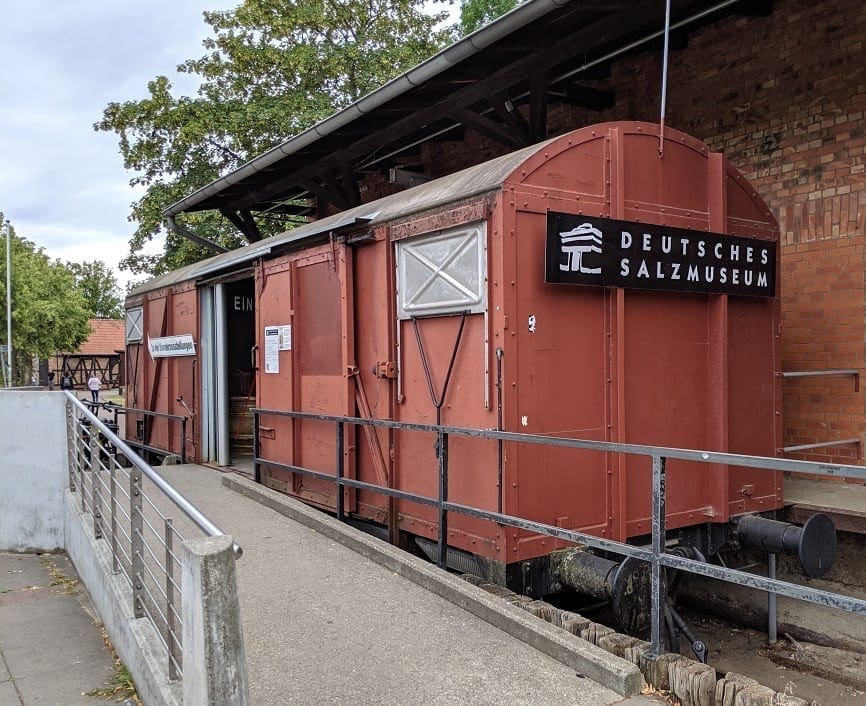 Salt was leached from the ground, sifted, and dried in giant ovens. From Lüneburg, salt was transported all over Europe. Money flowed back to Lüneburg, making the city rich. The salt mining went on for 1024 years! Finally, the ground began to give way under Lüneburg, causing buildings to shift and settle. Since salt had lost much of its value, operations ceased.

Lüneburg has only been a Kurort (Spa Resort) since 1907, but it has something that no other Kurort has. Take a quiet walk through the Kurpark, and you will come across the Gradierwerk.  This funky looking building was designed to aid in the healing of  respiratory ailments. How? Salt Water from the brine spring below the town is fed over Blackthorn brushwood… the droplets splash when they hit the wood, and spray out, evaporating in the air. Patients sit in front of the structure and breathe it in. Eating and Drinking in Lüneburg

With so many fantastic bars and restaurants (and Kneipen) it’s easy to figure out what to do in Luneburg Germany! 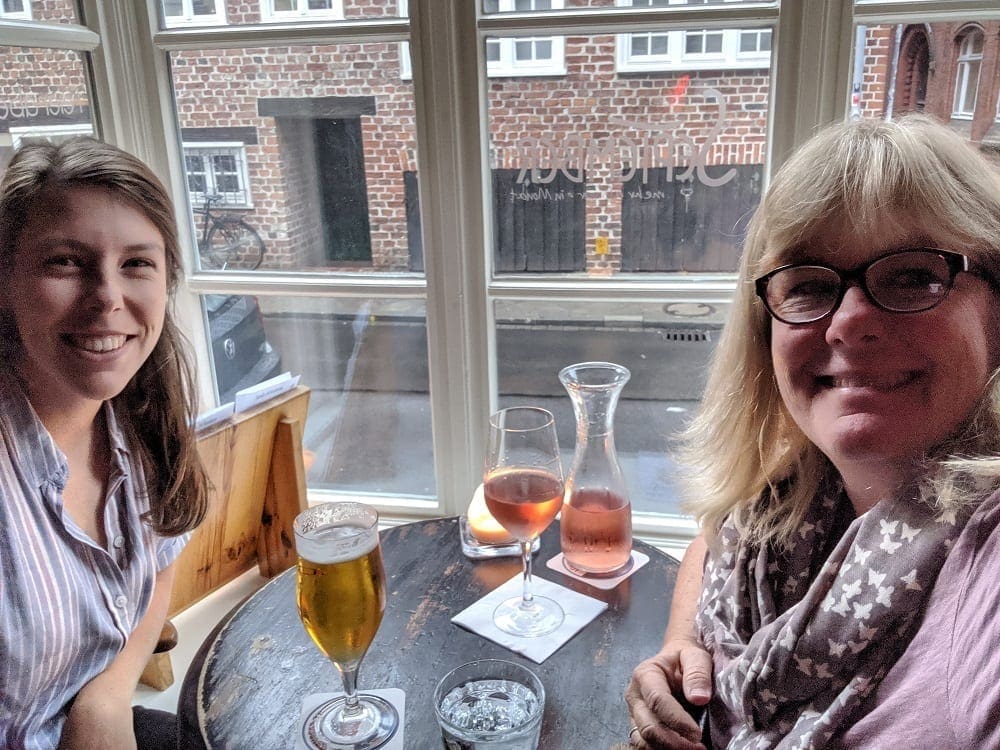 The Bar/ Restaurant September was the perfect place to end our day. 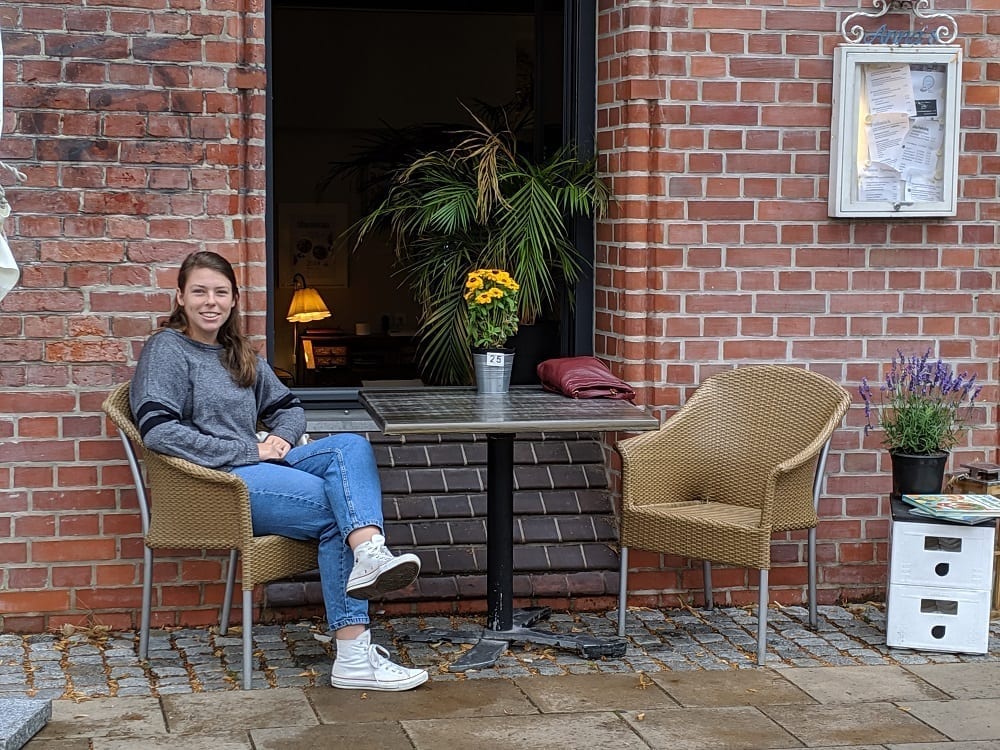 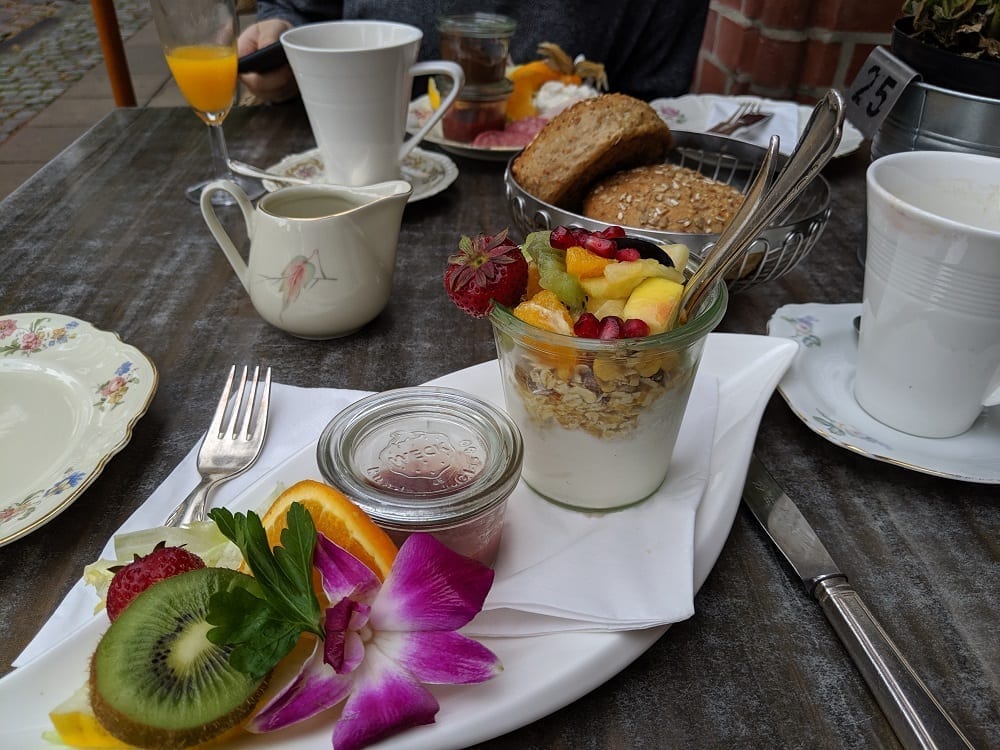 The perfect way to prepare for a hike in the Lüneburger Heide!

Why go to Lüneburg?

Looking for a beautiful Medieval town to spend a few easy days just ENJOYING life? No need to race around or DO things? Lüneburg is the perfect place to catch your breath on any German vacation.

0
2   0
previous A Visit to Miniature Wonderland, Hamburg
next Things to see in Munich Germany - Just a Few of my Favorite Places