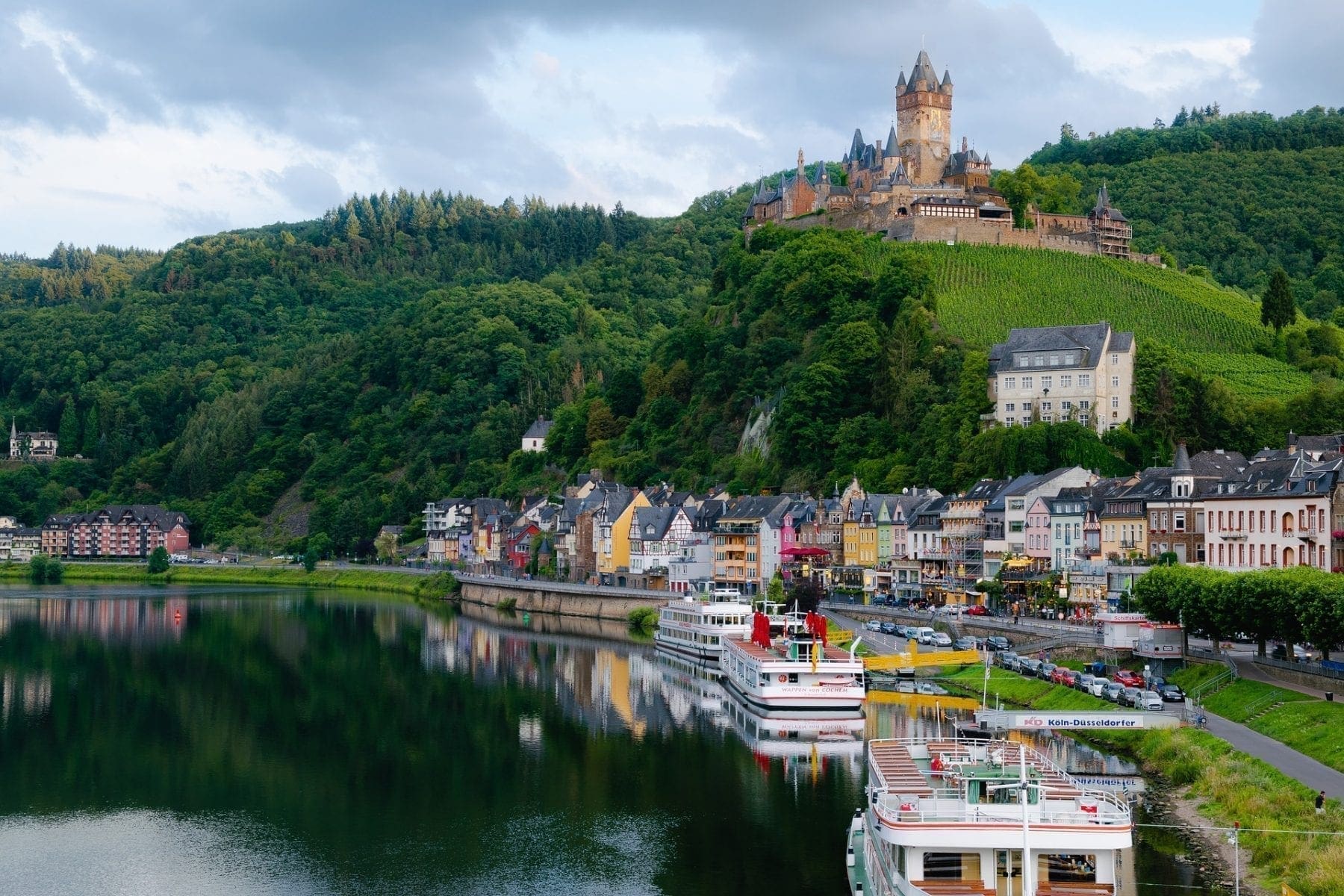 River Cruises in Germany- A Stress-Free Way to Experience Germany 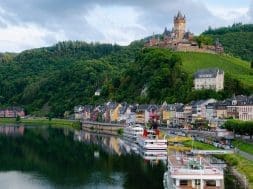 River Cruises in Germany- A Stress-Free Way to Experience Germany

River Cruises in Germany are a fabulous way to see the country. Imagine yourself on the deck of a cruise ship…. slowly passing by some of the most beautiful scenery in the world. Whether you choose a Rhine River Cruise , a Danube River Cruise, the Moselle, or the Elba, you will travel in luxury and comfort. All of the staterooms are well appointed for your comfort, and cared for by a Ship Steward. You just have to unpack once, and then you are free to enjoy your travels (without racing down the Autobahn!).

Along the way, the ships stop frequently at ports in the center of cities and towns that were chosen for their convenient locations to all of best sights. Visit castles, cathedrals and cities both large and small. While cruising the rivers in Germany and the rest of Europe, you enjoy watching the country side slowly roll by.  Often the river meanders right through the heart of the city. Unlike an Ocean Cruise, you won’t have to be bused in to the city, you just step off the boat in town!

This post contains affiliate links, at no additional cost to you, and I am compensated if you purchase after clicking on the links.

In June 2022 I will be cruising the Rhine, Main, and Danube with AmaWaterways.
Learn how you can come along here!

Come along on one of these River Cruises in Germany

River Cruise boats are specially designed for river cruising. The ships generally have only 2 floors above the water level, and the roof doubles as deck for sunbathing. There is something very exciting about passing under bridges that are only feet above your head. (In fact, many ships have to lower their bridge when sailing under a particularly low bridge…)

Generally, the public rooms go the width of the ship, and have large windows. You should always have a great view, because you won’t be trapped in the center of the boat. Staterooms have larger windows (not just portholes). Our last stateroom had a window just above the waterline, and that was exciting!.

Public decks are spacious, and uncrowded. There are usually between 120 and 250 guests on board the River Cruise ship so you won’t feel crowded, or have to stand in long lines.  There are ‘shows’, but not the Broadway extravaganzas that you have on Ocean Going ships. Often it is local musicians. And since the ships tie up in the evening, you have a chance to wander into town to sample the local nightlife.

Dining on a River Cruise in Germany

What is the Food Like on a River Cruise?

The River Cruise dining rooms offer delicious meals prepared by skilled chefs. Most ships have a casual buffet breakfast to start your day, and you can enjoy lunch by a window mid-day. In the evening, a 5 star meal, complete with wine is served by a the well trained wait staff who see to your every need. Do you have special dietary concerns? Just let the staff know in advance, and they will care for you. On many ships, all meals and drinks, including wine, are included in the cost of your Cruise, eliminating the worry of a large bill at the end of your trip.

Of course, you will be stopping often in towns and cities along the way, and you don’t want to pass up a chance to try the local foods!

Staterooms on River  Cruises in Germany

What are the Staterooms Like?
Staterooms on a River Cruise Ship vary from ship to ship, and cruise line to cruise line. Each ship boasts a number of different levels or staterooms, from the very basic… beds, bath, closet… to the opulent suite with private balcony.

All staterooms are serviced daily, much like a hotel room, by a ship steward who insures that you are enjoying the best possible experience.

The romantic Rhine River runs from the southeastern base of the Swiss Alps, in the canton of Grisons north through the heart of Germany and ends at the North Sea in the Netherlands. Cruising the Rhine takes you past Fairy Tale Castles and wineries that were established during the time of the Romans. The river is used as a major transportation waterway for goods and people. Castles were built along the river to collect tolls, and vineyards line the hillsides.

Cruise for a few days or a week on the Rhine… see Cologne (Koln) with it’s magnificent Cathedral and Chocolate Museum, stop for a few glasses of wine along the famous DrosselGasse in Rudesheim, and enjoy visiting Medieval Castles and churches in cities like Bacharach. Strasbourg, Mainz. The Black Forest and Basel are also along the Romantic Rhine.

While the Rhine is beautiful in the summertime, during the month of December, the Christmas Markets make the Rhine an extra special place to visit. Book a cruise with friends and fellow shoppers, and enjoy the smells and flavors of the Christmas Season in Germany. 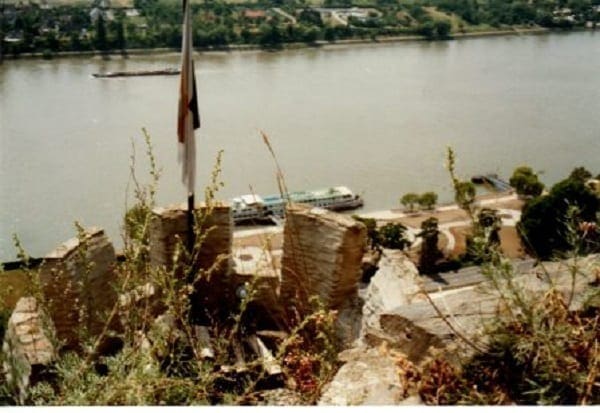 Looking down at our Riverboat cruise ship from our Castle tour.

A Quiet, Serene, Scenic Tributary of the Rhine

The Moselle River, or Mosel, as it is known in Germany, branches off from the Rhine at Koblenz in Germany, and flows through the Moselle River Valley, through Trier, and in to France (brushing up against Luxemburg.) Fairy Tale castles and vineyards line the steep banks of this quieter river.

Fewer tourists travel along the Moselle, making it less busy, but definitely not less interesting! Famous Burg Eltz, a relatively untouched Castle that is still occupied by family, nestles in a Valley nearby. Cochem’s amazing Castle sits high on the hill, and a lovely pedestrian area for strolling and enjoying a cup of coffee and slice of cake (if you have time, they also have a large Schwimmbad … Swimming Pool…. where you can swim, sauna or go on a waterslide.)  Trier’s old town is dominated by the Porta Negra, the remains of an ancient Roman wall. All along the way, you will stop at small villages and towns that are known for their unspoiled beauty and, of course, you can enjoy sweet Moselle wine.

Cruising the Moselle is often done in addition to cruises on other rivers, or just as a shorter trip. 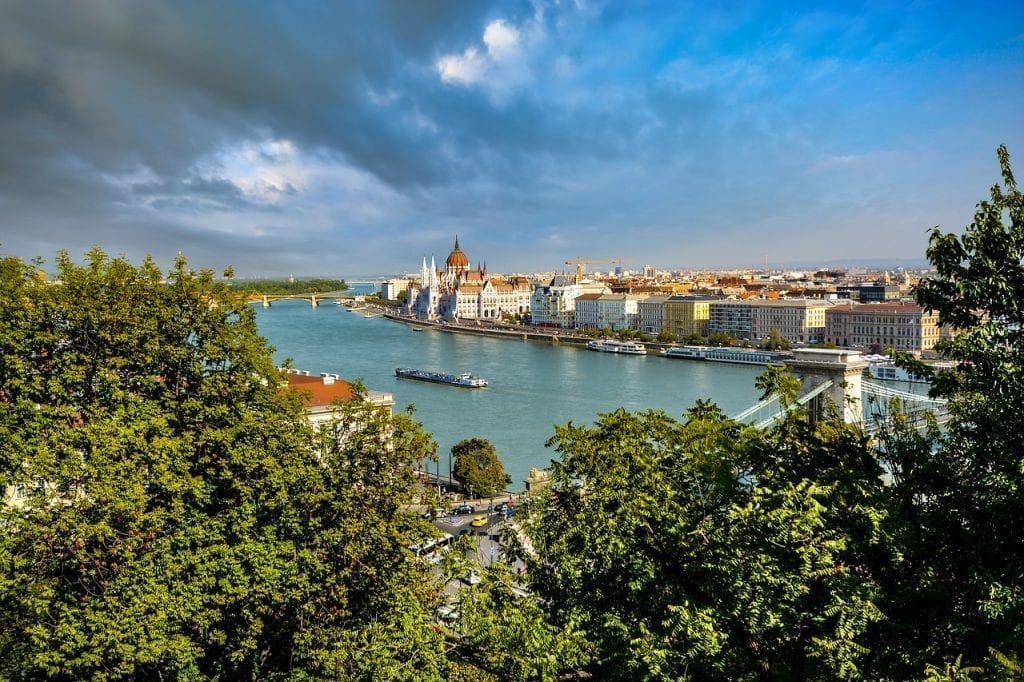 The beautiful Danube flows from Germany through Austria and into Hungary, tracing borders of former empires. The economic importance of the river is evident as it flows through the capitol cities of Austria (Vienna), Hungary (Budapest), and Slovakia (Belgrade). After rolling along Serbia, Romania and Bulgaria, the Danube ends in the Black Sea.

Many cruises begin or end in Budapest, where you have a chance to tour the cities of Buda and Pest, on each side of the River. In Vienna you can visit the Schoenbrunn Palace, tour St Stephen’s Cathedral, and have a slice of Sacher Torte. Other stops include Passau, Melk and its Benedictine Abbey, and Regensburg, a German Medieval city trapped in time. You can sail further down the Danube toward the Black Sea. The best way to visit this amazing area is by cruise ship.

Through the Former East Germany 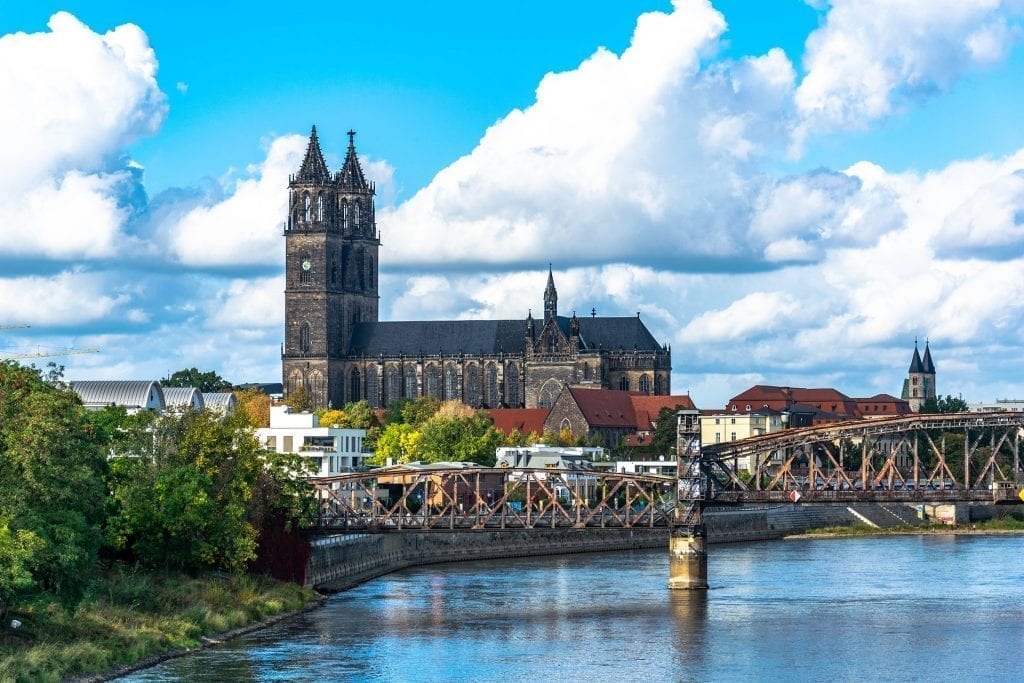 Magdeburg on the Elbe

The Elbe flows through central Europe, beginning near Prague in the Czech Republic, and flowing north to Hamburg. Along the way it passes through the Florence on the Elbe, Dresden Germany, Wittenburg, home to Martin Luther, and Meissen, a center for fine porcelain in Europe.

East Germany has flourished in the years since the walls came down. What a marvelous chance to experience this beautiful land before it is overrun by tourists. For many of German descent, this is a great chance to see home again. 0
0   0
previous Will Your Kids Enjoy a Trip To Germany? Of Course they WILL!
next What to Bring Back from Germany or How I Overfill My Suitcase Every Time