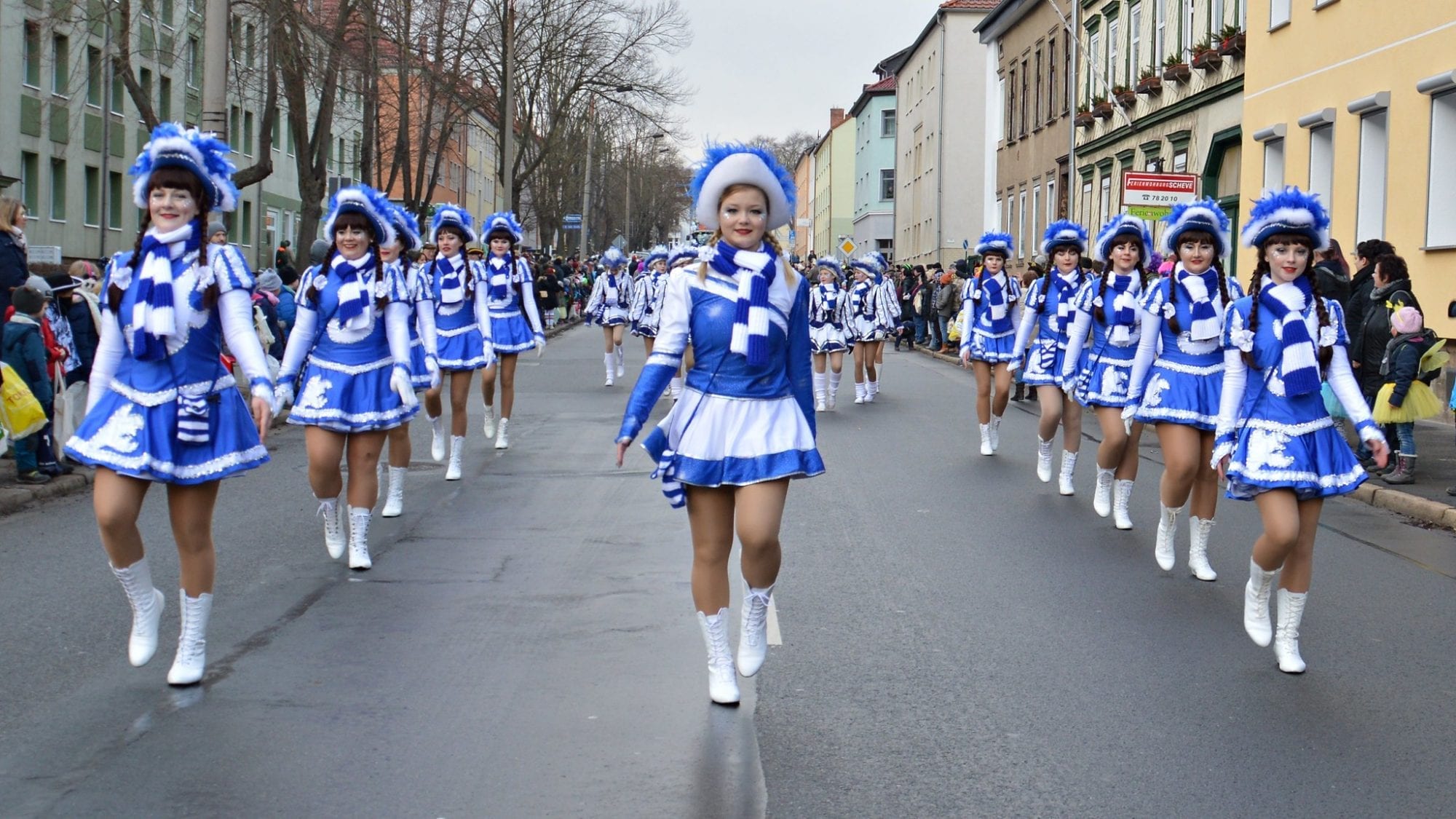 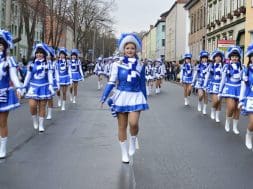 Ever wonder about those beautiful dancing girls in “military uniforms” at Karneval/Fasching celebrations? They march and move in perfect synchronicity and even tumble through the air without landing on their head. But did you know that these “Tanzmariechen” or “Funkenmariechen” are more than just a pretty face and fun dance moves? Their history reaches back almost 200 years to early Karneval celebrations in Cologne. And… they’ve gone from a ragged group of men performing in satire, to highly trained dance athletes who compete in national championships. All this with a smile on their faces! So who are the Tanzmariechen? And how did they become such an important part of the Karneval celebrations? 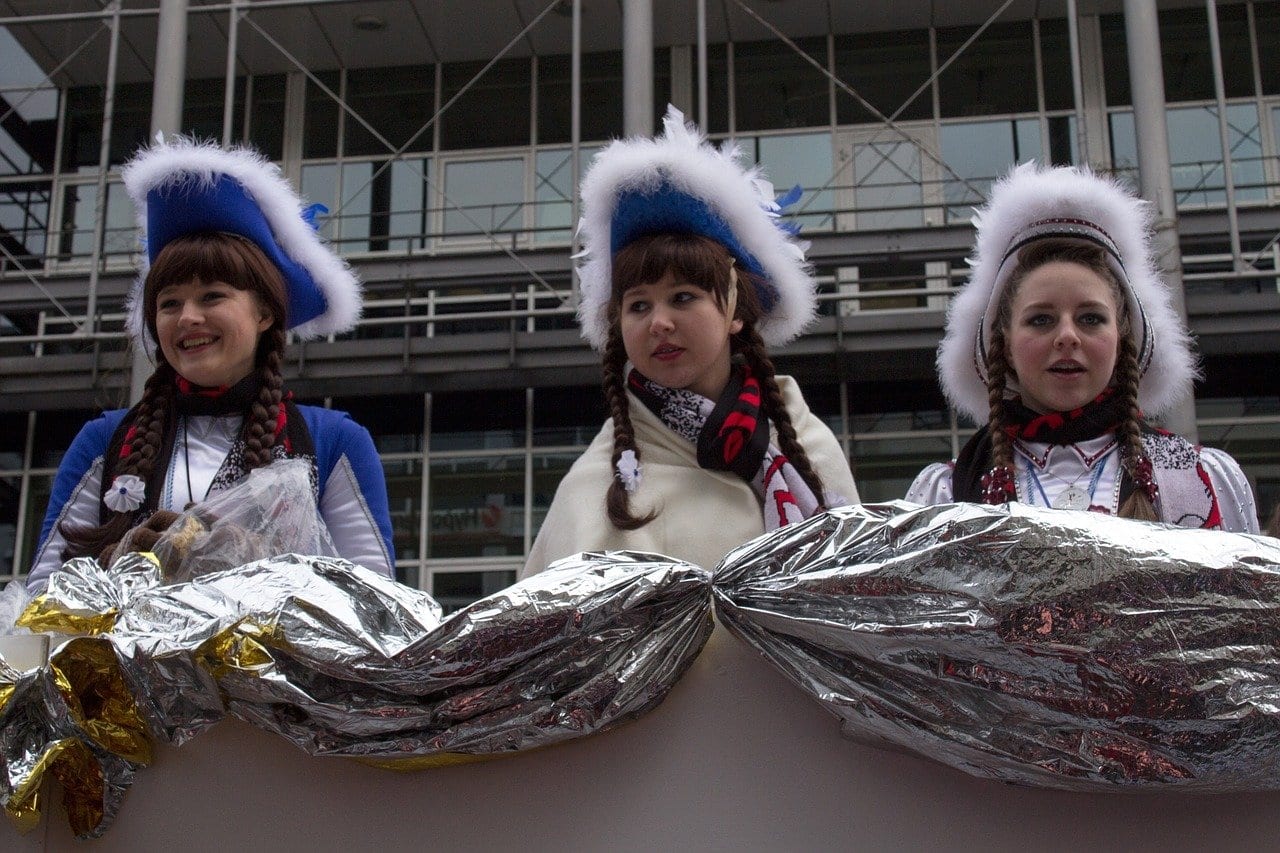 You’ve seen them in Karneval Parades and at Karneval Functions. The Tanzmariechen or Funkenmariechen dressed in “Military” type uniforms... jackets with rows of buttons, a Tricone hat and boots… but they also wear short skirts with ruffled bloomers or petticoats.

But how did they get their names? And why do they wear Military uniforms?

Tanz means Dance… Funken is a spark…. “Mariechen” means “little Marie”.   They got their name in Cologne where the dancers are all “Mariechen”. The words Tanzmariechen and Funkenmariechen tend to be used interchangeably. Whether they dance solo…as the female part of the Karneval Guard, or if they dance in a corp of girls (or a co-ed group), they are all “Mariechen”.

But that doesn’t tell the story, does it? 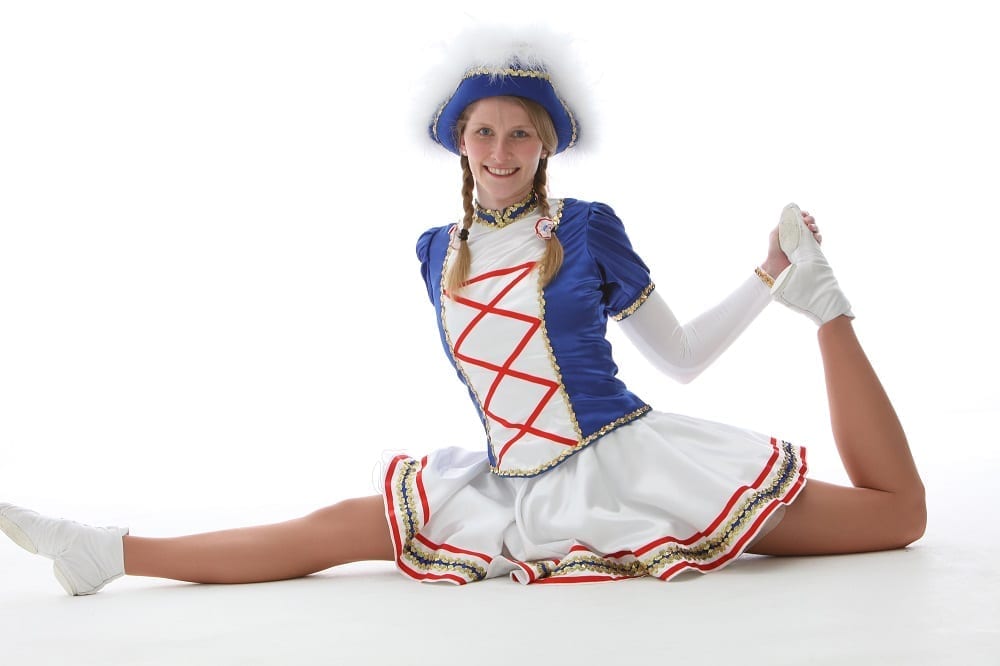 Remember your Karneval History? November 11 (at 11:11am) is the official opening of the 5th Season (Karneval). Much of the pageantry and costumes are a reflection of the time when Napoleon controlled part of the Rhineland (1801-1813).  (For a full refresher –>What is Karneval/Fasching).

Here’s where things get a little murky.

The first mention of a “Mariechentanz” happened in 1823, just a few years after Napoleons departure (with the help of the Prussians). It wasn’t a very organized group, just a bunch of men who had a fun idea about dressing as women in the Karneval parade. Yes, men. And they weren’t meant to be dancers, they played the part of “Marketeers”. What are Marketeers? Army Camp Followers… women who supplied soldiers with goods, “services” and Schnapps. (Some of these women also danced). The costumes the men wore resembled the uniforms of Napoleons army, except that they wore skirts. (Some even have a small barrel attached to their hip for Schnapps).

Since the group was so popular, and they had so much fun, they came back the next year. And again and again for 50 years. Still, in all that time, they were basically an unorganized group of guys who were just in it for the Rosenmontag Parade.

In 1869, they named their group the Roten Funken, and in 1880, they were officially made part of the Karneval program. Of course, their dancing was still just wiggles and improvisation. No choreography or organization beyond showing up for the parade in uniform.

At the end of the 19th century, dance instructor Frederich Gosewich stepped up and choreographed a dance for the group. (His young daughter danced out front to show them the steps). And finally, the dance group was solidified with roles assigned to particular people. Now you had a Princes Guard, Mariechen, and a Regimental Daughter. Still, the whole dance group was men… with men playing the woman’s parts in drag.

The National Socialist party had serious issues with the idea of men in women’s clothing. They began pressuring the Karneval officials to put a stop to it, and let women take the roles. (Ironically, activists insisted that women couldn’t possibly take the female roles, because it would be too strenuous a job for them.) Karneval officials took the safe route and caved to the demands, and women took over the roll of Mariechen (and somehow managed to keep up with the rigors of dancing). 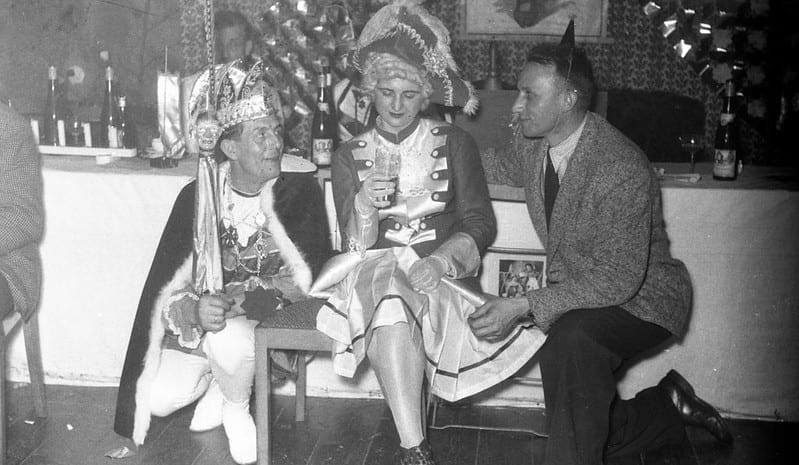 Ironically, after the war, when it was suggested that men return to the roll, no one wanted them. By this time everyone had become accustomed to women in the part… and the audience enjoyed the skill and charisma women brought to the performance (probably they looked better in the outfits too).

In the 1950s  ballet Master Peter Schnitzler was brought in to teach the Tanzmariechen new moves. Now they didn’t just march and sway, they did real dances with complicated choreography. And they get more complicated and intricate every year! Today you will see them doing acrobatics including high throws, leaps and lifts! 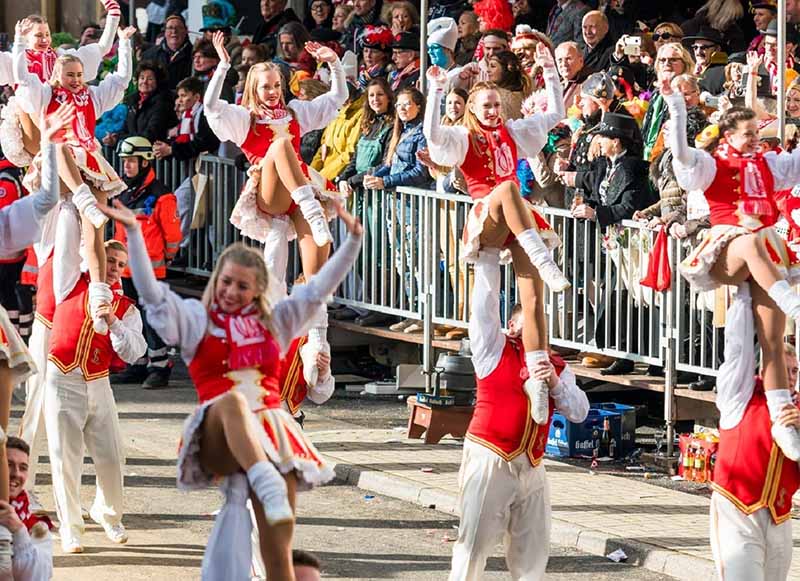 Since 1986, some Tanzmariechen groups now practice several times a week, and compete year round in intense competitions called Gardetanz or Gardentanzsport. Groups or solo dancers compete in three different styles-
Marshtanz (March Dance)- Dance troupes perform choreographed dances combining march and ballet with a focus on synchronization.
Mariechentanz – This is a higher level of dance and march, with a lot of acrobatics thrown in.
Schautanz (Show Dance)- Mixes traditional Mariechentanz with modern music and props. There are fewer rules to judging the Schautanz.

But of course, it’s at Karneval that they really shine!

You will find them at every Karneval Parades and performances, and most Karneval Clubs have their own dance troop. 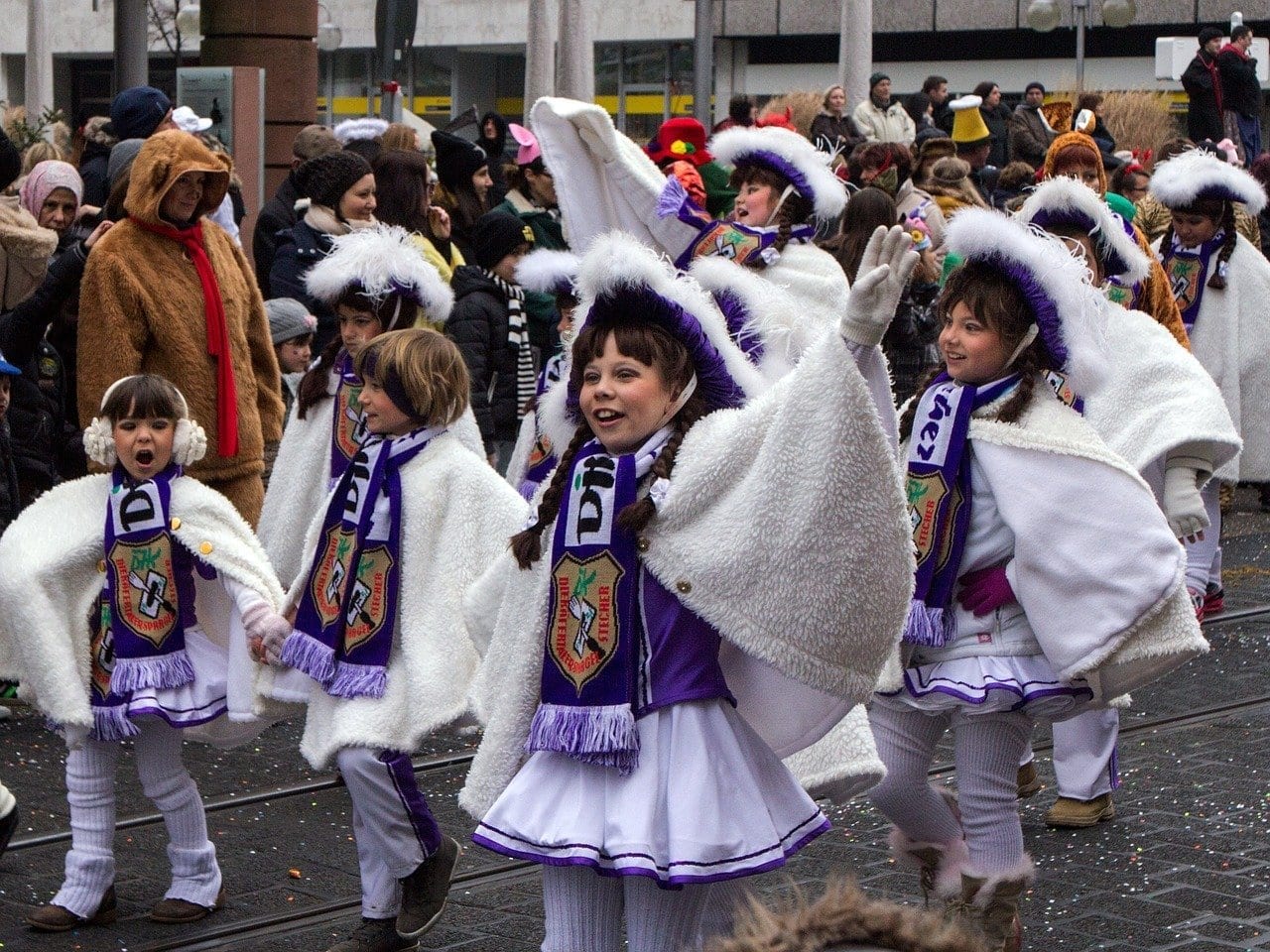 The Tanzmariechen are there remind the audience not to take themselves too seriously. That for right at this moment, everything is fun. They entertain, and take great joy in it. And we should all enjoy it too.

Watch these Tanzmariechen in a Karneval Parade

Lift the Leg! This Documentary shows how Tanzmariechen have shifted from Karneval Performers to Year round competion