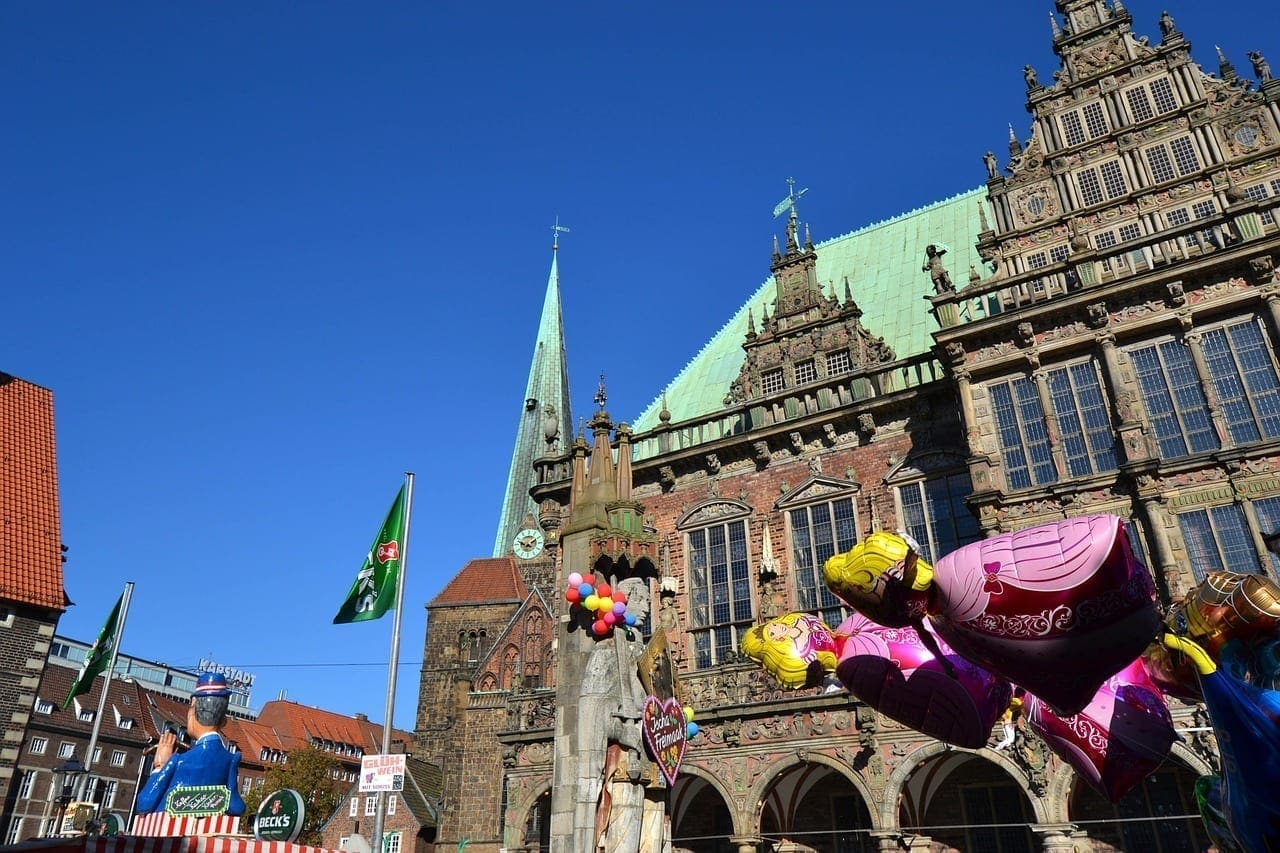 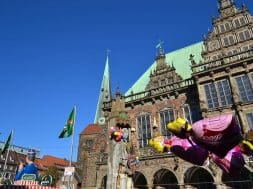 Everyone knows about Oktoberfest, but it’s not the only big October Festival in Germany. In fact, the Bremen Freimarkt which starts the second week of October, attracts over 4 million people per year over 17 days! What is the Bremen Freimarkt? This 1000 year old festival is the largest festival in Northern Germany. Although it started out as a “Free Market”, meaning that merchants were free to sell any of their wares. Today the Freimarkt is more of a Carnival or Fun Fair with hundreds of rides and attractions, as well as parades. There are still many booths and stalls selling everything from crafts to treats to food. And of course, there are Beer Tents.…

UPDATE- The Bremen Freimarkt has been cancelled for 2020 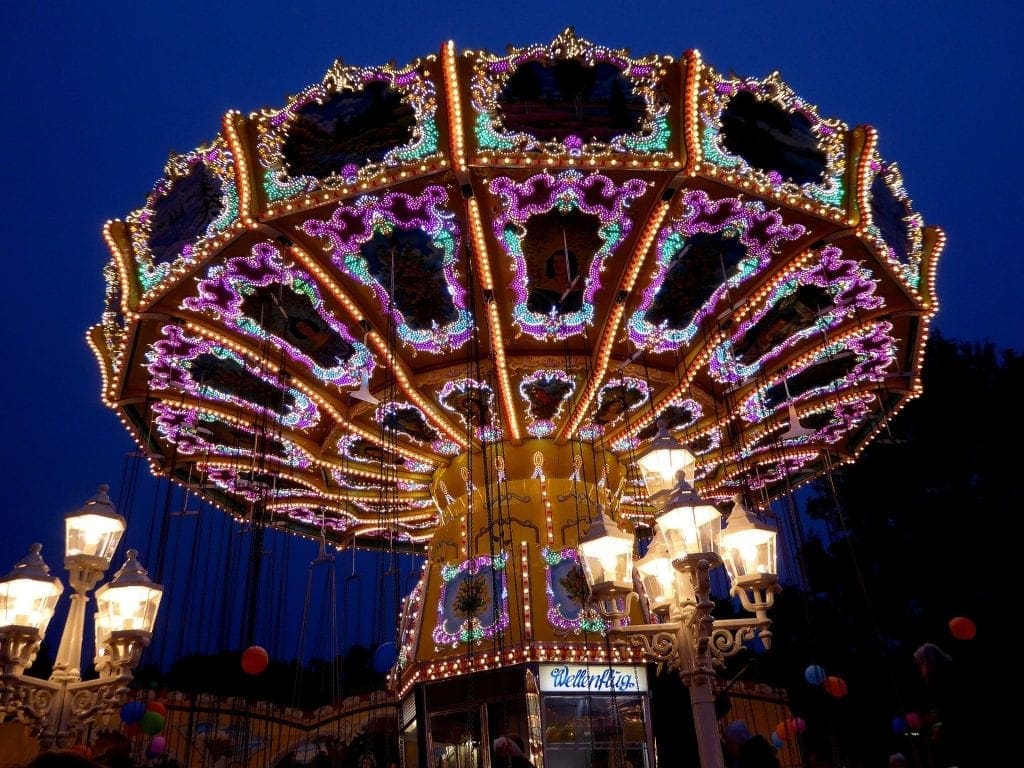 To understand why the Freimarkt has such an important history, we need to start with a history lesson. (Don’t worry, it will be short).

In the Middle Ages, Village and Town Markets were fairly well controlled by royalty and local Guilds. They would happen on specific days, and only those in the area could sell at the Markets, unless they had special permission. A FREI Markt (or Free Market) meant that people from all over could come and sell at the market.

This is big deal! There was serious money to be made in trade. And if you were a leather worker or craftsman who didn’t belong to the local Guild.. you were out of luck. In Germany, everything was strictly controlled. People couldn’t just move or sell things when they wanted to (and this is way before internet commerce).

In 1035 Conrad II officially granted the city of  Bremen  the right to hold a Free Market or Freimarkt twice a year… Once starting on October 16, and the second during the week before Pfingsten (in English, Pentecost, which happens 5 weeks after Easter) to be held in the Marktplatz in front of the Bremen Cathedral. (Over time, the Pfingsten Markt faded away, but the October market remained.)

Think about it… for the first time, locals and travelers could sell whatever they wanted to at the Market… no restrictions, and no interference.

From Market to Fair

At first, the Freimarkt in Bremen was primarily a regular Markt (or Market Place) with merchants selling wares that people would need. Cloth, Salt, Spices, Food, Tools… Blacksmiths showed off their work, so did Glass Blowers and Leather Workers. Time passed and traveling performers began showing up. Jugglers, Fortune Tellers and Minstrels earned a little money with their song and dance routines. As the Freimarkt grew (and the world shrunk because of exploration) “exotic” beasts were put on display… Lions and Camels… a dancing Bear and Monkeys. People came from all around the region to take part in the Market and its amusements.

Still, until the 1800s, it was mainly a consumer Market Place. Then in 1809, the first Carousel appeared in Bremen (“Human Powered), and took the Freimarkt into a new direction. NOW it was more about amusements than buying goods. Before too long, there was a Schiff Schaukel (Ship Swing), and then Organ Grinders showed up to entertain the crowds. Today the Freimarkt is BOOMING. Over 350 Carnival Workers show up with more than 50 rides including a 150 Foot tall Ferris Wheel! booths and stands with games and other amusements.

The Freimarkt outgrew its original location and spread out to over 24 acres. Now you will find the Amusements in the City Center and in front of the Liebfraukirche, but the bigger part of the Freimarkt is near the Haubtbahnhof.

There are Parades (the largest is on the second Saturday of the Market), a Miss Freimarkt show, and nightly Fireworks!!

As a nod to its roots, the “Kleinen Freimarkt” or “Marktdöflein” in the city center is set up like a Market from the Middle Ages with Smithies, Stone Masons and wood workers… and of course Jesters. 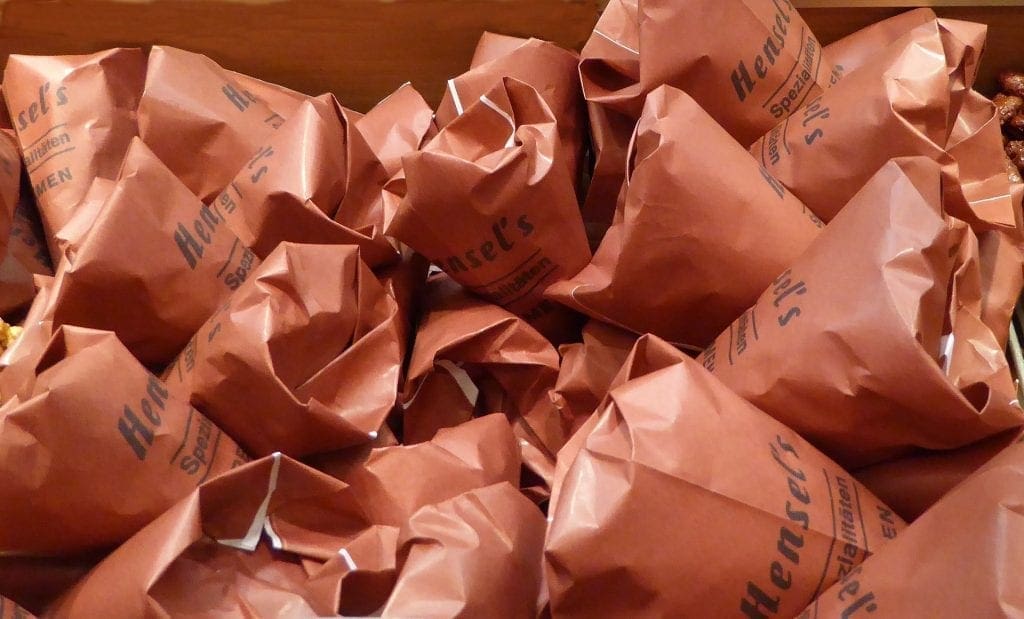 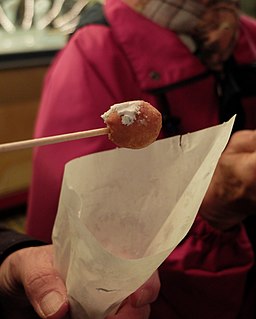 What to Eat at Freimarkt

There are plenty of food booths offering Festival Foods like Gebrannte Mandeln (Sugar Roasted Almonds), Bratwurst, and Lebkuchen Herze (Gingerbread Hearts). You will also find Pizza and Cotton Candy. You will find cafes, a Western Saloon, Wine and Prosecco Stands, and even a Feuerzangenbowle stand. To really get a feel for the local favorites, you must try the smoked Eel… and of course, the Schmalzkuchen. These little donuts have been sold at the Freimarkt for over 150 years!

And of course… the Beer Tents!

There are several Beer Tents on the site, including Halle 7, the Königsalm, and the Bayernzelt. The party goes late into the evening! Beer flows, and live music keeps the Gemütlichkeit going for two weeks.

And then it’s done…

The Freimarkt ends in a Funeral Parade with pallbearers carrying a coffin full of carnival prizes signals the end of the fun… and then it packs up for another year. But don’t worry! In October 2020, the Freimarkt will be back in Bremen!

tags: What is the Bremen Freimarkt
0