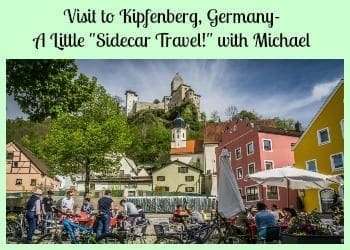 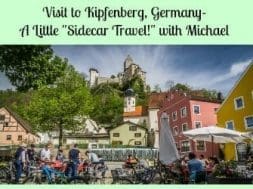 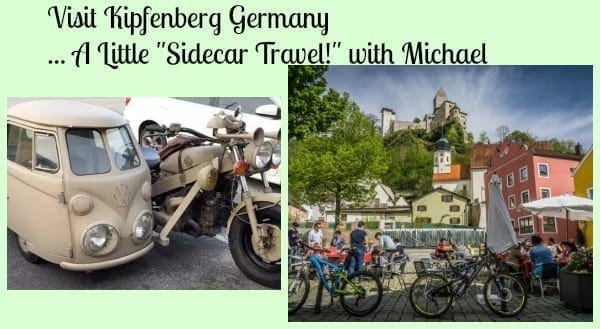 I want to begin by thanking Michael Graber for sharing these photos from his visit to Kipfenberg, Germany. “Armchair travel” is defined as traveling from the comfort of your chair at home… since Michael is taking us along on a Motorcycle Tour, I’m calling this Sidecar Travel! Michael introduced himself to me as a motorcycle enthusiast who loves taking photos. I jumped on the opportunity to share his “tours” with all of you! He’s promised more trips now that the Motorcycle Season is beginning.

Now settle in to the Bulli sidecar, put your helmet on, and enjoy Kipfenberg ….

(BTW. No… that’s not really Michael’s motorcycle and sidecar… his is actually a speedy looking machine…. it’s just how I imagine riding along!)

Kipfenberg, Germany can be found 45 minutes south of Nuremberg, near Ingolstadt, in the geographical center of Bavaria. The Altmühl River runs through this market town that dates back to 1800 BC… from the time of the early Bavarians, known as the Bajuwaren. Romans also established a settlement here, and parts of the border wall or Limes they built is still standing.

The Burg Kipfenberg stands high on the hill, and can be seen from all over town. Burg Kipfenberg was built in the 12th century for the Knights Kropf. In 1301 it was sold to the Hochstift Eichstätt  under Bishop Konrad II von Pfeffenhausen. (During the Holy Roman Empire, territories like the Hochstift Eichstätt  were controlled by Bishops who acted as Princes.) In 1803, secularization ended the Bishop’s rule, and the property was returned to the State… It was sold to a private family, and began to fall into ruins. In 1914, the Taeschner Family from Potsdam purchased the castle, and hired architect  Bodo Ebhardt to rebuild it.

Unfortunately, the castle is in private hands, and can not be toured. BUT! You can visit the Römer und Bajuwaren Museum, dedicated to the Romans and the early Bavarian people in the Altmühltal Nature Park. And if you’re really a history buff, you can go to the “Infopoint Limes”,  a display of Roman sites, including a fully recreated watchtower.

Or you can just find a relaxing place to enjoy a beer or piece of Kuchen in this lovely little German town.

I just LOVE the colorful buildings! 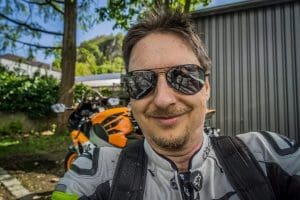 Thank you again to Michael for sharing his beautiful photos with us! I wonder where he will take us next?

If you have any suggestions… leave them in the comments, or send me an email at [email protected], and I’ll pass it along!

And if you have any photos you would like to share, let me know.  Maybe we can all armchair travel with you too! 0
0   0
previous German Easter Markets - Easter Shopping In Germany
next The Best Shopping Malls Germany Has- Find Everything You Need, and a Few Things You Don't