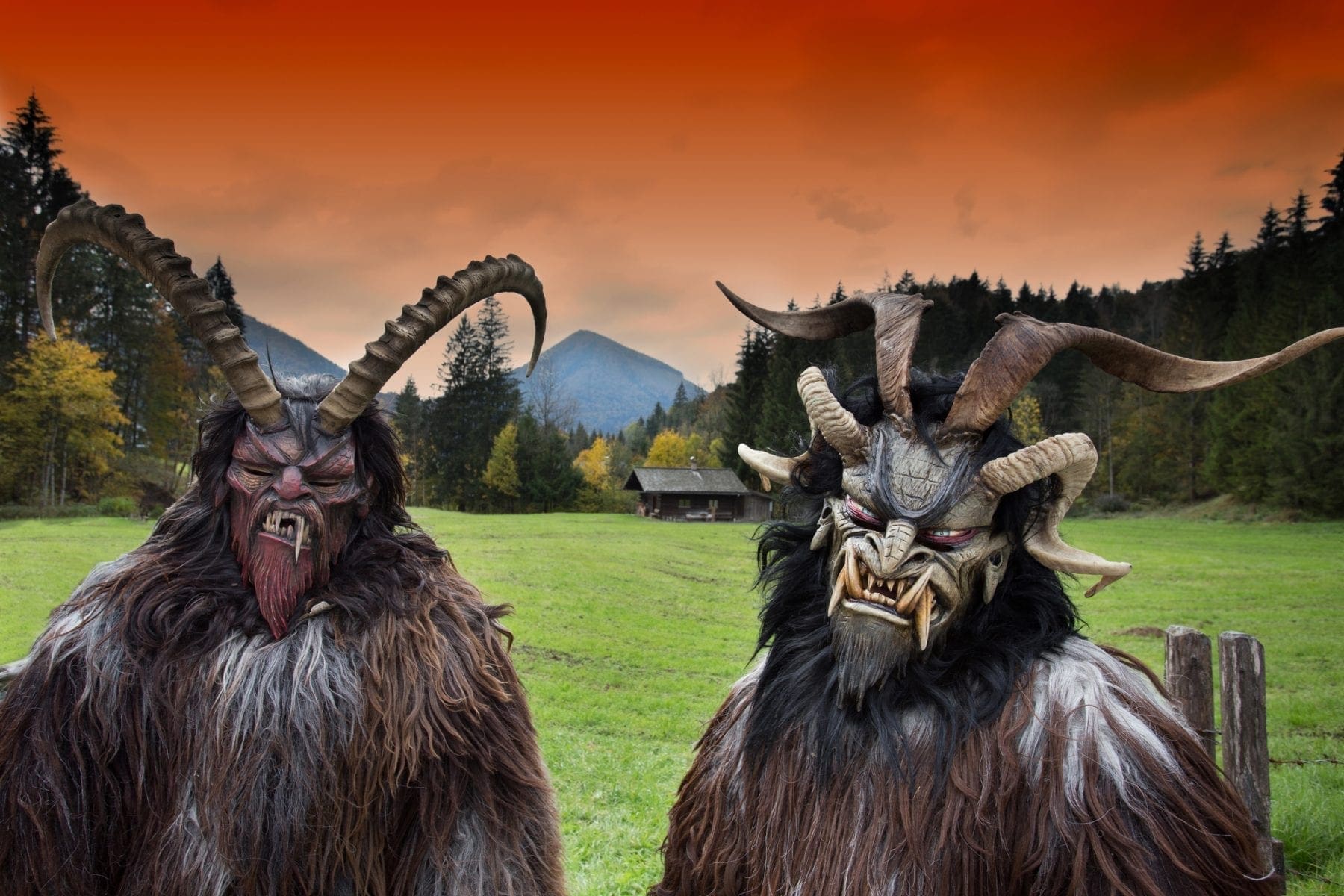 Krampus in German Folklore – What IS Krampus? 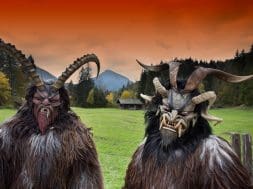 Krampus in German Folklore – What IS Krampus?

I grew up the child of Northern German parents, so I didn’t learn about Krampus until I was much older. In my world, Knecht Ruprecht was St Nicholas’s sidekick, and Krampus lived in Bavaria and Austria. But now, because of movies and popular culture… as well as annual Krampus Runs… the myth of Krampus is becoming synonymous with German Christmas. But What is Krampus? Where did he come from? and What is the role of Krampus in German Folklore? 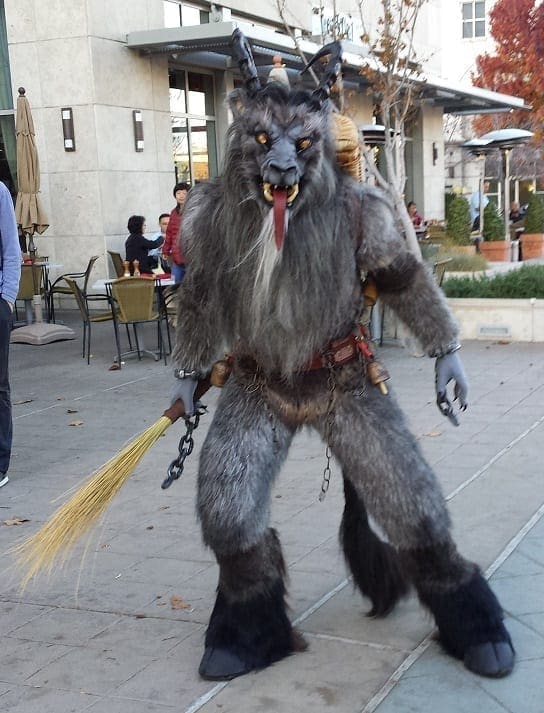 So, what is the role of Krampus in German Folklore? Historians believe that the Krampus myth comes from German Paganism, back in the time before the Middle Ages when the country converted to Christianity. Until then, Germans were Poly-theistic… meaning they worshiped many gods… including many of the Norse Gods like Woden (Odin in Norway) and Krampus, thought to be the son of the Norse god, Hel.

Krampus’s name comes from the German word Krampen, meaning Claw. And he is described as being half goat and half demon, with dark fur, large horns and sharp teeth, as well as claws for hands. Pagan and Christian Symbolism surround this beast. Krampus carries chains, to suggest he is bound to the Devil, and a bundle of Birch switches, which may have connection to Pagan scourging rites, to punish children. In some stories he carries a sack, and is said to carry “bad children” away. The bag is most likely left over from legends of invaders stealing children away during the Dark Ages.

Altogether, he is a massively frightening being.

Is Krampus the DEVIL?

In the 12th Century, the Catholic Church attempted to do away with the Krampus Myth because of his resemblance to the devil. The best they could do was suppress the celebrations a bit. The Krampus Legend persisted, it seems that Krampus in German folklore is just too powerful a legend to do away with. Again in the 1930s, the conservative Austrian government tried to stamp out Krampus… but it didn’t take. 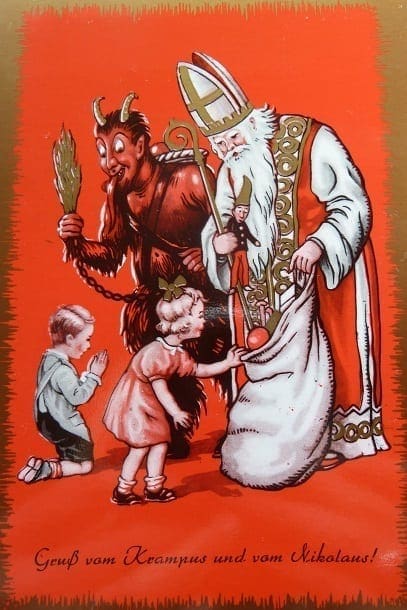 Think of Krampus as a character who balances the sweetness and light of St Nicholas. (Sort of an extension of the Dualism we see in Jesus and the Devil…. ). They aren’t considered equal, but one tempers the other. Make sense? (Besides, it seems quite normal to me, as a kid who grew up in a German household, to think that with every wonderful thing, there is the possibility of something really bad happening because of wrong behavior).

St Nicholas visits homes during the night on December 5th, and leaves treats and small gifts for children who leave their shoes out for him. The tradition of gift-giving goes back to the late Middle Ages when nuns would honor St Nicholas by leaving baskets of food and clothing for the needy. Other sources say that Sailors visiting Church Festivals on December 6 to celebrate the feast day of St. Nicholas, their patron saint, would pick up small gifts from Nicholas fair vendors to bring home as gifts… including small toys and treats for children.

The celebration of the Feast Day of St Nicholas dates back to the 11th century in Germany. What makes this Winter celebration special, is that it’s the only festival that is dedicated to Children. It’s a bright spot in  a long cold German winter. Animal masked Devils have been a part of German folktales since before the 16th century, wrecking havoc and causing mischief, and the by the 17th century, the St Nicholas legend slowly assimilated the Krampus story until they were a pair. 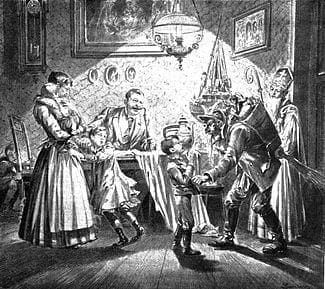 Although the tradition of St Nicholas traveling with a companion became standard, different parts of Germany took different views.  In the North, St Nicholas traveled with Knecht Ruprect and visited homes of good children and brought treats, sometimes Krampus would go along and deliver the switch to naughty children… and in some cases, even took them away in his bag! In the Bavarian/Austrian Alpine region, Krampus also traveled alone, visiting children on his own. His presence was much better known in the south.

Today, Dec. 5th is known as Krampus night… the night when Krampus is free to roam.

Click to read more about St Nicholas’s other Companions here

Krampus Cards, greeting cards and postcards have been exchanged in Europe since the 1800s, usually the cards have funny rhymes or poems in them. Originally, they had more sinister pictures of Krampus (and he was often portrayed with a busty lady) but today things are toning down… and Krampus is becoming a “cute” figure. Much in the way that some people hate Valentine’s day and Cupids… Krampus is becoming the Anti-Santa.

You can even get Krampus letters  to send to your favorite “disobedient child”….

Don’t we all have a friend who needs that Krampus Card? 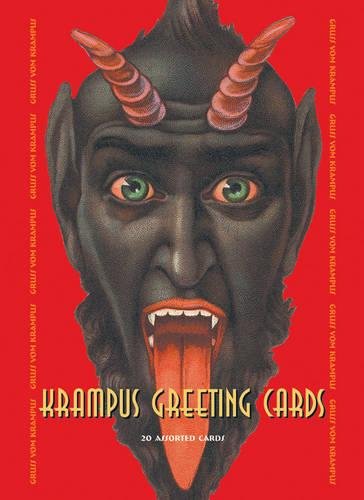 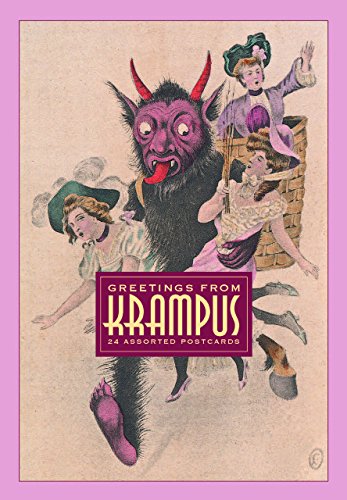 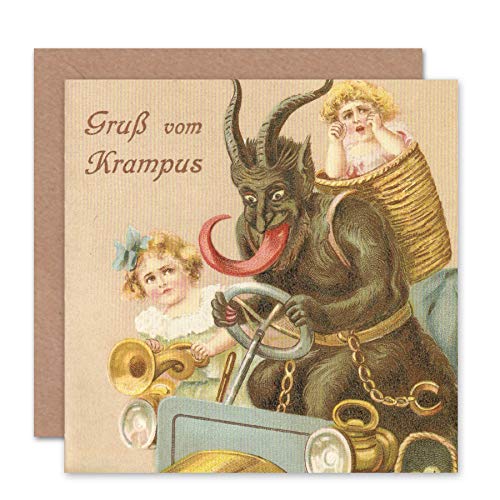 Interestingly enough, Krampus is making big come-back in popular culture. Some think that this upsurge is a response to the wild commercialization of Christmas. A way of adding a darker reality into the Candy-like Sweetness that Christmas usually represents.

Today you will see Krampus everywhere! On T-shirts, in movies, even as Christmas Ornaments! There are chocolates, figurines and horns you can wear. Krampus Runs- people racing in Krampus Costumes, are a typical Dec. 6 event! And Krampus Parties are becoming a popular “anti-Christmas” celebration.

Tired of sugar and spice? Tired of thoughtful gifts that take ages to pick out for that special someone? Why not go with a Krampus gift instead??

If anything, it looks like poor Krampus may suffer from over-commercialization himself… (but I do wonder what a  Krampus Candle smells like? 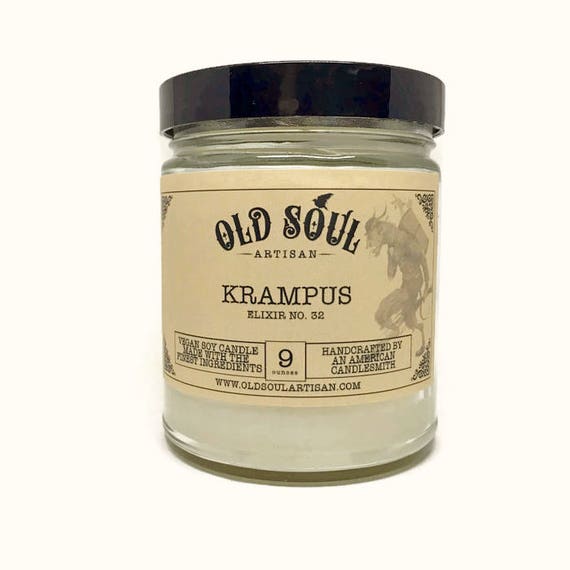 But Hurry! The shop is only open until Dec. 15th!

Krampus in the Corner

Forget the Elf on a Shelf! Keep your friends in line with Krampus in the Corner! (Fair warning, this is NOT for Children, there is a bit of gore…. Of course, if you raised your children on Struwwelpeter, it’s probably ok). This takes the idea of Krampus in German folklore, and puts it in a more modern context. 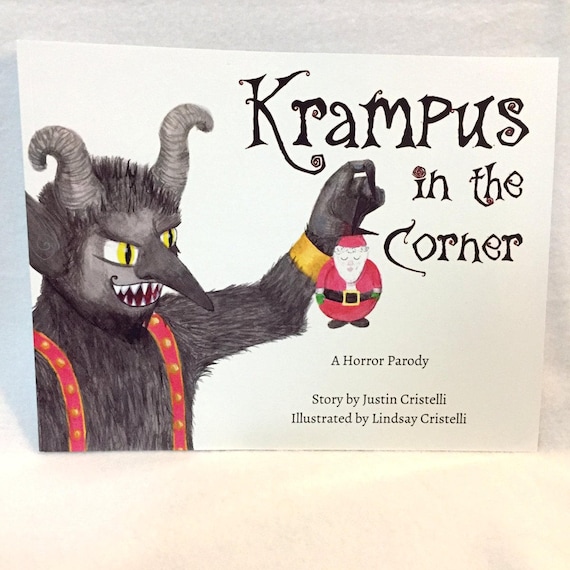 Krampus in the Corner paperback book