Home German Holidays and Festivals German Christmas Traditions What is a Rauschgoldengel? The legend of the Golden Angel

What is a Rauschgoldengel? The legend of the Golden Angel

What is a Rauschgoldengel? The legend of the Golden Angel

High above the Plobenhofstraße entrance of the Nuremberg Christkindelmarkt hangs the Rauschgoldengel. This large gold-foil angel is there to welcome all of the guests as a symbol of the market. And all over the market, you will find stalls selling smaller versions of this Golden Angel. But what is a Rauschgoldengel? And how did a foil angel become the symbol for Nuremberg? It turns out… there is a fairy tale-like story that goes back to the 16th Century, about a father, a daughter, and the 30 Years War.

In the 16th century, Nuremberg in the Franconian region of Germany was the center for metalworking, including Rauschgold, a paper thin type of foil made from brass that looked like gold. (The word rausch means noise or sound… referring to the fluttering sound the foil makes).

During the 30 years war, citizens were encouraged to take in refugees who were escaping religious persecution in France. To set an example, Erasmus Ebner a well off local businessman, blacksmith and “Rauschgold Maker”, took in a father and daughter to protect them from the harsh winter.

The name of the father is lost to history, all that is known is that he was a master woodcarver who was able to carry his tools with him while fleeing the war. His wife was already dead, the only family he had left was his daughter, and she was quite weak. So that she didn’t have to be embarrassed by her worn out clothing, the wife of Erasmus Ebner gave the girl a beautiful embroidered dress to wear to church. It had a long skirt, a velvet bodice, beautiful ribbons and a shawl for her shoulders. Over her braids she wore a cap called a Göckalashaube. The girl felt happy, and lucky to wear such finery.

Unfortunately, the girl grew weaker with illness, and died. The Ebner family buried her in the Sunday dress she loved so much. Her father fell into despair. He found solace in carving… and just sat for days in the workshop with his knife and a block of wood. It’s possible that he was given a piece of Rauschgold… or he just found it there in the workshop.

One day, the master woodcarver was gone. He left behind a letter of thanks… and a carved Angel who wore a dress of folded Rauschgold that covered her from head to toe. The Angel looked exactly like his daughter, the only difference, she had wings, just like the Christkind (the Christchild).

The tragic story of the master carver and his daughter spread throughout Nuremberg. Everyone wanted to see the amazing Rauschgoldengel he left behind. And before long, people wanted one for themselves.

Today, the Rauschgoldengels are generally made from golden paper, and not metal, but they are still one of the biggest sellers at the Nuremberg Market. Eventually it became known as the Christkindlmarkt in honor of the Golden Christ Child.

To further promote the Since 1933, a girl in a golden dress, the Christkindl, still watches over the Nuremberg Christkindlmarkt. She greets children, collects their Christmas wishes, reads stories and sings. 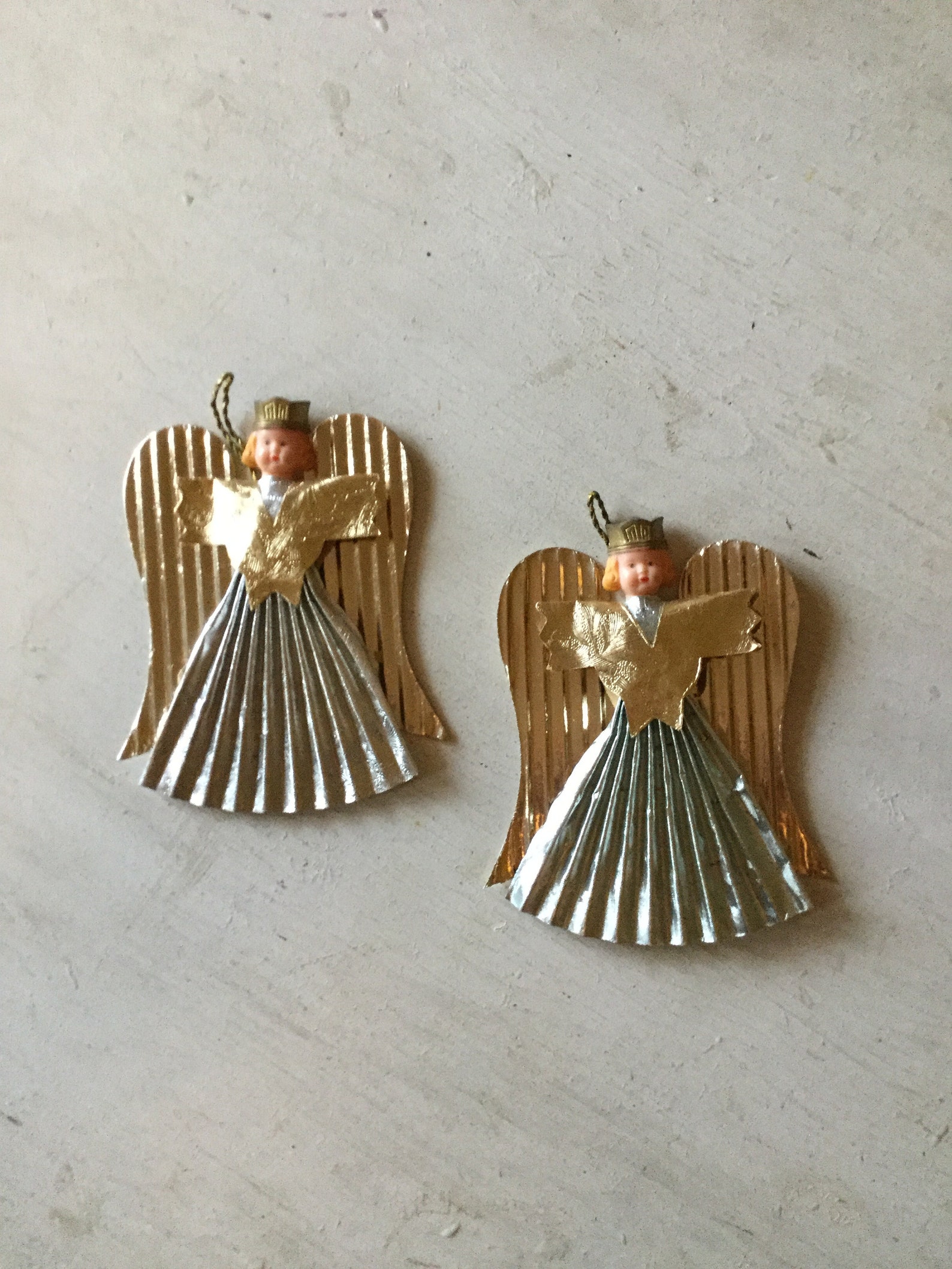 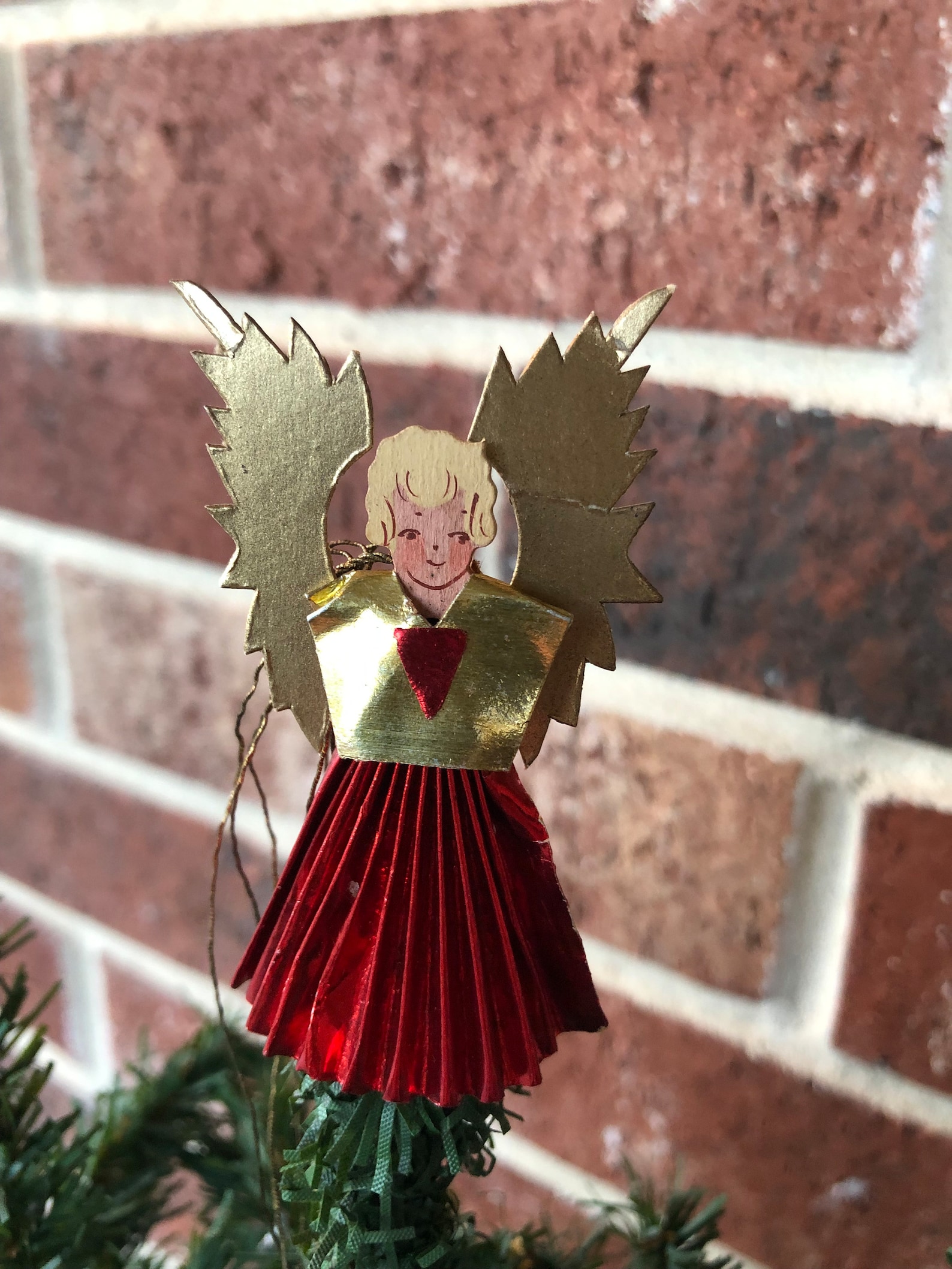 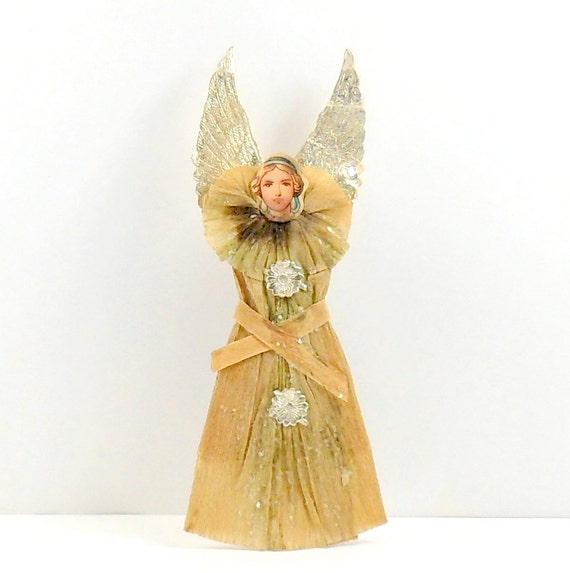 You can make your Own Rauschgoldengel

This is a more complete (and complex) Rauschgoldengel

This one is more simple

tags: What is a Rauschgoldengel
0